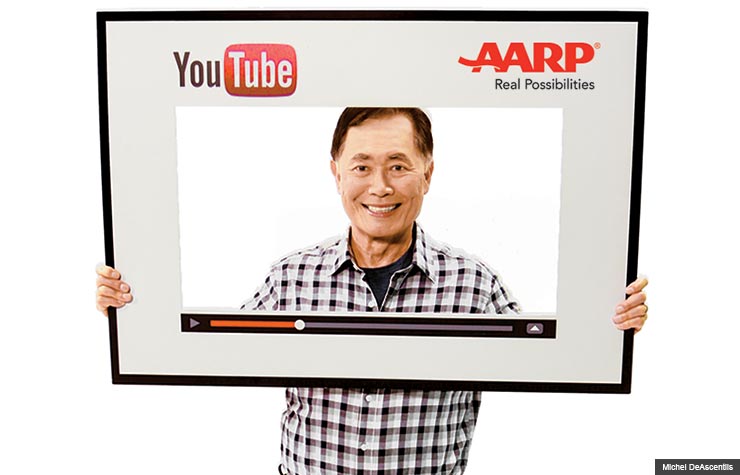 Below the window of his condo's fitness center on Manhattan's West 57th Street, George Takei can see elementary school children crowding into classes.

A few doors west, at Carnegie Hall, throngs of grown-up concertgoers push through the entrance each night.

For both demographics — and all those in between — the smiling man on the treadmill is a familiar face. And the moment he opens his mouth to speak, that rolling voice makes his identity unmistakable.

Sign up for the AARP Leisure Newsletter — and get movie reviews, great games and more

I feel grateful that I can go down to the fitness center every morning and huff and puff," the 76-year-old actor says, each word hitting a different, vaguely musical note. "This is a very important year that I have to live through, because my father passed at 76. So far, so good!"

Takei laughs, and his laugh is as tuneful as his conversational voice.

Pick your medium, and Takei has made his mark on it.

From his days as Mr. Sulu on TV's Star Trek and its big-screen sequels to his countless cartoon voice-over gigs to his indelible appearances as a Sharp electronics pitchman ("Oh MYYYY!") to his breakout debut as a pithy Facebook and Twitter commentator, Takei has become all but inescapable — and that's a good thing for all of us.

IS BEING A STAR TREK FAN LOGICAL? Of course it is. Here are 7 fun facts every Trekkie should know. 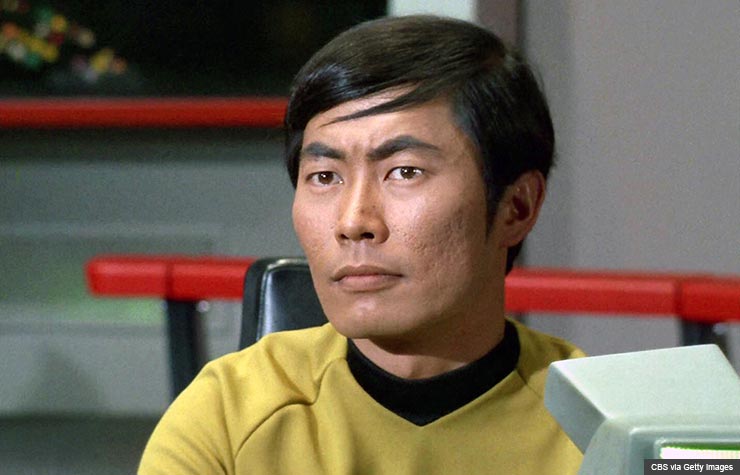 To this day, George Takei is in many ways defined by his iconic role as Mr. Sulu, helm officer of the U.S.S. Enterprise and member of the "Star Trek" series' original cast.

"I think there are so many people who are skittish about venturing into what they're not used to," he says. "They're quite comfortable sending letters with stamps on them.

"Take my own sister," Takei says. "She doesn't have a computer! She doesn't even like to answer the telephone; we always have to leave messages for her! She's weird that way. And I tell her, 'You've got to at least be able to let us send you emails!' She says she's gonna do it, she's gonna do it … but she doesn't do it! She does go see my movies and she does watch me on television. I think if I tell her 'I'm performing on the computer,' then she might get one."

"I feel very blessed to be actively engaged like this," he says. "That's the way life should be for all of us."

Now George Takei is launching a new phase of his 60-year career: He's hosting Takei's Take, a biweekly show on AARP's YouTube channel. He'll bring his unique outlook to a wide range of issues, including current events, pop culture and what's new in social media and on YouTube.

AARP Members! Save 10 percent on purchases of classic DVDs and Blu-ray discs with Movies Unlimited

"It was a very intriguing offer from AARP," he says. "This is an opportunity to get more people in on the wonderful blessings that our generation now has: the advances that have been made — not only in medicine, fitness and good health, but also in staying mentally and physically engaged."

A native Californian, Takei splits his time between his Los Angeles home and Manhattan condo. He recalls with a laugh the first time he ventured east, as a 22-year-old actor, on the vague promise from a producer that he could audition for a part in an off-Broadway play.

"I didn't get the part," he says. But for two years he stayed put, trying to make it. "I remember writing my parents that I was staying at The Sloane House. That was another name for the 34th Street YMCA. But I told them 'The Sloane House,' which made them feel very comfortable!"

For two years young Takei was the prototypical struggling actor, "loading trucks in Long Island City, typing labels at a publishing firm, selling ties at B. Altman and Ohrbach's. It was two years, but it seemed like 20 years." Returning to L.A., Takei found steady work on TV shows — among them The Twilight Zone, Death Valley Days, Voyage to the Bottom of the Sea, My Three Sons and I Spy.

Then in 1966 a little show named Star Trek aired. After scraping around to find viewers for three seasons, the show disappeared from the airways, but not from the hearts of its rabid fan base. To this day, Takei is in many ways defined by his iconic role as Mr. Sulu, helm officer of the U.S.S. Enterprise.

A Pledge to Preserve History

"I've just returned from Austin," says Takei with a chuckle. "A group of Trekkies in full Starfleet uniform came out and greeted me!"

Takei was in Texas to speak with prospective backers for his lifelong dream: A Broadway production of Allegiance, a musical he developed about the internment of Japanese Americans during World War II.

He knows the subject well: During the war, Takei and his family were pulled from their Los Angeles home and forced to live in camps, first in Arkansas and later in Northern California.

"I'm always surprised," he says, and for the first time that levity in his voice drops away, "by the number of Americans who, when I tell them about my childhood incarceration, say, 'I had no idea something that terrible happened here in the United States.'"

He continues: "I think it is a gravely important part of American history, because I think in order to make our democracy a better democracy, we have to learn from where we've failed."

Takei confesses that most of his latter-day media forays have been aimed at ultimately drawing attention to both Allegiance — which he expects to open in New York next spring — and the history it portrays. But he's also enjoyed his pioneering role as one of the most consistently quotable figures on Twitter.

Some of his tweets became instant classics

"Pot legalized in two states, and the maker of Twinkies shutters its doors?" he tweeted last year. "Now that's IRONY."

"TN bill will prevent teachers from using the word 'gay' in class. In response, I'm lending them my name: 'It's okay to be Takei.'"

It's the enforced brevity of Twitter, with its challenging 140-character limit, that delights Takei.

"As I suspect you may have gathered by now," he says, "I am a garrulous, long-winded raconteur!"

George Takei is laughing again, and so are we.

'STAR TREK' STAR COMPARES HIS SKILLS TO MR. SULU: John Cho ventures to the YH Studio to talk about his film 'Star Trek: Into Darkness.