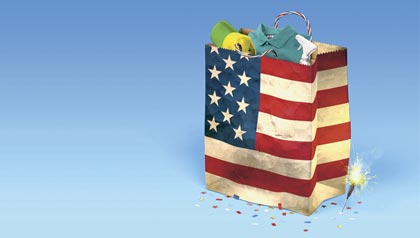 More shoppers, led by consumers 50-plus, are buying American.

"Made in China." Those are words you won't see in shops like Norton's U.S.A. in Barrington, Ill., and Made in America in Elma, N.Y. The expanding shelves at these stores are stocked only with U.S.-produced products, from clothing to cleaning supplies. And more consumers are hankering for these goods, a movement driven by older shoppers and entrepreneurs.

See also: Land your next job by understanding the U.S. economy and retraining for your part in it.

Seventy-two percent of consumers 50 through 64 say "Made in the USA" labeling significantly influences their purchases, according to Perception Research Services International. And 81 percent of people 50 through 64 buy American because they believe it helps the economy, the same survey found.

Store owners agree. "I wanted to highlight the companies that kept their factories here in the U.S.," explains Norton's U.S.A. owner Deborah Leydig, 59, whose product offering has jumped from just 80 items in 2007 to nearly 2,000 now (including everything from lightbulbs to glassware). Certain foreign goods can cost less due to cheaper labor, but as Leydig explains, "My customers really want to buy American, so they will pay more if they have to, and of course they get the American-made quality as well."

Some stores are reporting double-digit sales increases, with older adults making up more than half of the customers in some cases. The Made in America store has tripled in square footage since its 2010 opening, and Bert's All American Market in Littleton, Colo., has quadrupled its product mix in about a year and a half.

Plus, the Price of Freedom gift shop in D.C.'s National Museum of American History now sells only U.S.-made goods. Can't visit a local shop? E-retailers (like AmericanAisle.com and MadeInUSAForever.com) are easy to find. And you can always ship your purchases the all-American way — much appreciated by the U.S. Postal Service.

In the interconnected world economy, it's not good news when China's growth slows, despite our competition with them in some areas. Reuters has that story.