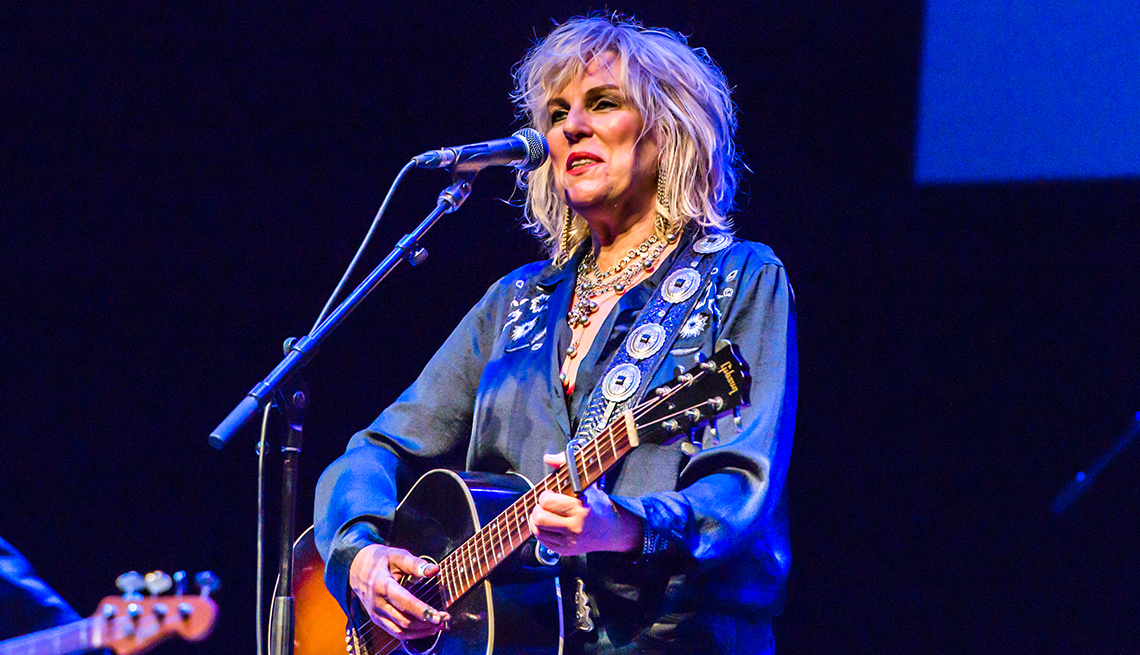 Lucinda Williams hasn't been out of her house in East Nashville since March 9, relying on food delivery; subscription movies; exercise equipment; and the company of her husband and manager, Tom Overby, to keep her sane. She's also wrestling with a stark reality about staying in.

"This whole thing about people over 65 being the most vulnerable category, I'm like, ‘OK, I'm 67, so that puts me in that category,'” Williams says with a laugh on the phone. “I don't feel whatever it's supposed to feel like when you're 67."

Williams, a three-time Grammy winner who dresses in fringed leather jackets and high-heeled boots, and normally keeps a robust touring schedule, says she has been going in a straight line since she first started playing in bars and clubs four decades ago. “Things have changed around me, but I haven't changed."

And though she's a progressive thinker with such a powerful command of language and description that Time magazine once called her “America's best songwriter,” she admits she's somewhat taxed as to what to make of the current times.

She and Overby relocated to Tennessee from Los Angeles in February, only to have the March 3 tornado rip the roof off their porch and level homes in their neighborhood. Then came the coronavirus and imposed isolation.

“It's almost biblical. Now we need some locusts. That's the next thing.” Seriously, she adds, “I feel like Mother Earth is saying, ‘This destruction and lack of care has been going on too long.’ It's a little punishment: ‘You have to be locked in you room to think about what you've done.'”

Like everyone else, Williams is dealing with the attendant anxieties. Glued to the news, she has canceled her upcoming tour, of course, though she will likely livestream some special listening sessions. And as a confessed OCD germophobe, she worries about carry-out food packaging. “I've washed my hands so much, and even my right arm up to the elbow, that it's like I've got alligator skin."

But the worst part was learning on the same day in April that the coronavirus had taken friends John Prine and Hal Willner. Willner produced Williams’ 2007 album, West, which Vanity Fair called “the record of a lifetime — part Hank Williams, part Bob Dylan, part Keith Richards circa Exile on Main St.” She was so shocked at the loss that she couldn't really absorb it all.

"There's a message here,” she says of the pandemic. “Who knows why it's happening? The best-case scenario would be that people change for the better. But right now, you feel like you're sitting there with your hands tied."

Williams has felt hamstrung for several years now, and the songs on her tough and gritty new album, Good Souls Better Angels (out April 24), thrum with angst about what she sees as the social, human and political ills of the nation. 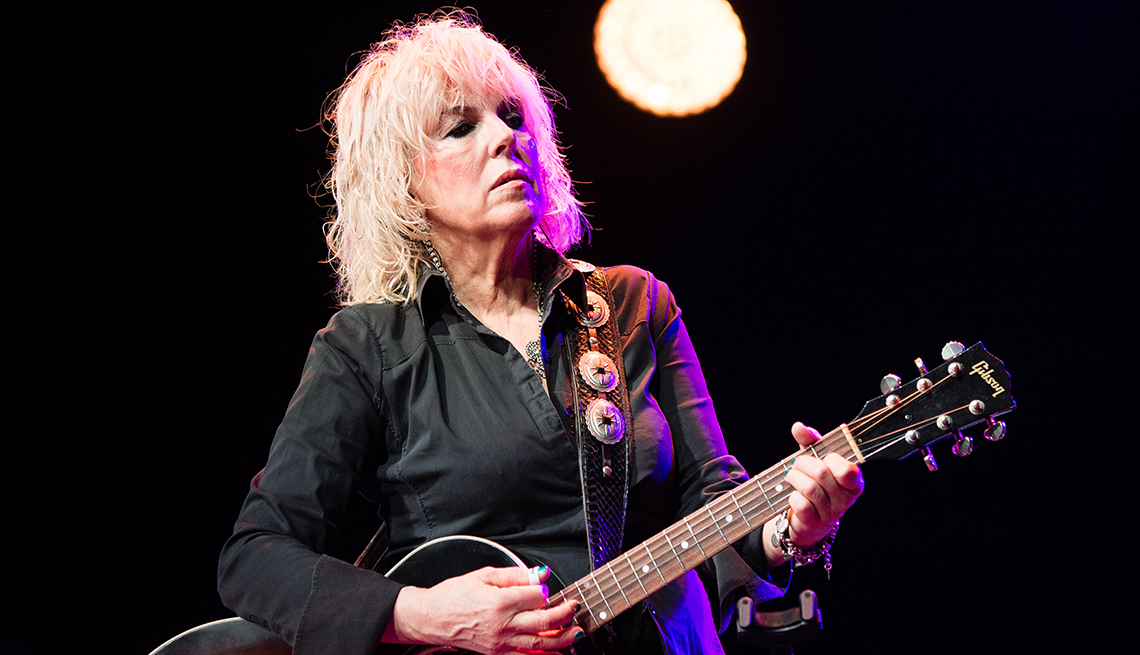 Biggest singles: “Still I Long for Your Kiss,” “Can't Let Go,” “Get Right with God”

Unusual wedding: She and Tom Overby married on stage in Minneapolis in front of fans and invited guests

Where past work such as 1992's seminal Sweet Old World and the landmark Car Wheels on a Gravel Road from 1998 teem with personal, narrative-driven songs steeped in poetic, folk tradition, Williams changes styles on the new album, making good use of the way her voice has become richer, deeper and edgier through the years: Good Souls Better Angels is grungy garage rock, delivered with a one-two punch of punk and blues, and on the unforgettable “Wakin’ Up,” an uppercut of explicit language, if only one word.

"The sound alone is really different, I think,” she offers. “It's the record I've been wanting to make for a while.”

Produced by Williams, Overby and engineer Ray Kennedy, and recorded in Nashville with her crack touring band — guitarist Stuart Mathis, bassist David Sutton and drummer Butch Norton, the album is a stripped-down scorcher with little layering, just a raw, throbbing throwback played on crunchy 1950s guitars using vintage amplifiers. Williams and company captured most of the songs in two or three takes over 15 days.

The topical songs rip through the common touchstones of modern society, from heads of government (the scathing “Man without a Soul"), social media ("Shadows & Doubts"), and 24/7 cable TV ("Bad News Blues"), before Williams returns to some of her favorite themes, fire-and-brimstone religion ("Big Rotator") and Robert Johnson-influenced comeuppance ("Pray the Devil Back to Hell").

Spirituality is a natural subject for her, given that both her grandfathers were Methodist preachers (she keeps a large collection of crosses), though she has long made a fascinated study of religious cults such as Santeria and even snake-handling.

Here, she's at her finest on two songs about which she also has personal knowledge. The first, “Wakin’ Up,” might seem to be a well-detailed portrait of a woman trapped in domestic abuse, except that Williams admits it's autobiographical: “Yeah, that was me,” she says of a situation before her 11-year marriage to Overby. “I was always like everybody else, ‘Why doesn't she leave?’ I definitely understand that battered woman syndrome now. When you're in that, you don't want to make him any crazier than he already is, so you just go through the motions and numb yourself to it."

Trauma is also at the heart of “Big Black Train,” a song Williams cowrote with Overby about the crushing freight of depression. Mental illness runs in the family: Her late mother, Lucy, an amateur pianist from Louisiana, suffered from manic-depression and paranoid schizophrenic tendencies, and was sometimes hospitalized.

"I remember one of the times from when I was a child, looking through the blinds at the ambulance coming and taking her away.” As the eldest of three children, “I think it strengthened me to a certain degree, because I had to survive emotionally. I learned how to play guitar and started singing songs and writing, and that became my outlet. I was fortunate in that my dad and I had this real strong bond, and that's what saved me."

Her father was the award-winning poet Miller Williams, who moved the family around the country, especially to small and medium-sized Southern towns, for his various teaching positions. ("I have as much of an affinity for New Orleans as anywhere,” Williams says. “'All my changes were there,’ as Neil Young wrote.")

She was born in Lake Charles, Louisiana, and spent her preteen years in Jackson, Mississippi; Macon, Georgia; and Baton Rouge, Louisiana. The family later settled at the University of Arkansas in Fayetteville in 1971. Much of the singer-songwriter's best work about love and death, especially 1992's haunting “Pineola,” comes from experiences in those earlier years.

Young Cindy, as she was known, was living in Baton Rouge when her mother moved out of the house. She was 12. “That's a hard age, and then my stepmother moved in almost at the same time.” A beat. “I need to find a good therapist. Sort some things out.” Her father got custody of the children in the ensuing divorce, an unusual ruling for 1965.

She and her father, who wrote 34 books but is probably best known for reading his poem “Of History and Hope” at President Bill Clinton's second inauguration, remained close until his death from Alzheimer's in 2015. In the early 2000s, they made a series of tandem appearances in which, back and forth, he read a poem and she sang one of her songs. Then one day while they were sitting in his house in Fayetteville, talking about his writing, he got still and quiet.

"He said, ‘Honey, I can't write poetry anymore,'” she remembers. “And I just lost it. I sat there and sobbed and sobbed, and put my arm around him. He couldn't read anymore, either, because he couldn't concentrate. A part of him was gone. That destroyed me.”

Good Souls Better Angels is often just as forlorn in spots, but the gentle ballad “When the Way Gets Dark” provides hope and comfort for the lost. And finally, “Good Souls,” the album's closer ("Keep me in the hands of saints/Keep me with the good souls/With the better angels") promises a new day for the resilient who persevere.

"We're gonna be OK,” Williams says of getting through these times. “You know, I'm a rebel, but at the end of the day, I'm an optimist.”