With his guitar unplugged and his heart on his sleeve, country star Vince Gill is at his most frank and fearless on his new album, Okie, which addresses controversial issues, musical heroes and Christian singer Amy Grant, his wife since 2000. At 62, he hasn't lost the drive or creative spark he felt as a teen opening for acts from Pure Prairie League to Kiss. When he isn't filling arenas with his own band or the Eagles, which drafted him in 2017 to replace the late Glenn Frey, you can find him playing with the Time Jumpers on Monday nights at Nashville's 3rd and Lindsley Bar and Grill.

We talked to the artist about his new album and some of its very personal songs:

'Okie’ was once a disparaging term for migrants heading west during the Dust Bowl era. Are you taking ownership of it here?

My dog is named Okie! I was watching the Ken Burns documentary on country music, and it was really emotional to finally see some respect for the music and history. I'm not a big mouthpiece spouting my opinions. I just wanted this album to be done with some grace, honesty and with no judgment.

"Forever Changed” is a moving song that looks at sexual assault with sensitivity yet it's still very raw.

"That's what I've always loved about country music. It doesn't shy away from murder ballads or real life... If we sweep pain and wrong under the rug, there's no opportunity for healing and change."

That's what I've always loved about country music. It doesn't shy away from murder ballads or real life. I've always been drawn to anything that had authenticity. We should talk about these things. If we sweep pain and wrong under the rug, there's no opportunity for healing and change.

"What Choice Will You Make” tackles an unexpected pregnancy but avoids stepping into the abortion debate. Why stay neutral?

It's not my job to wax poetically on what you should or shouldn't do. Sometimes, neither option is great. I don't like it when someone tells me how I should think, and I don't think this song does that.

In “The Red Words,” which refers to Bible verses spoken by Jesus, you write about Amy, “She'd take a bullet for her children, she'd give them all her last breath.”

She exemplifies what those red words really are. I watch people fight over those written words, and the ones that make the most sense are the ones he actually spoke.

And in “When My Amy Prays,” one line says, “When my world was torn to pieces, I still couldn't call his name.” How did it feel to reveal that, unlike Amy's, your faith has been shaky?

It was hard to be that vulnerable. To say that connection never came, bang, I've thrown myself out there as raw meat. I'm not what she is. That's just honest. Because I'm married to Amy, people assume I'm the same. They ask me all the time, do you know this or that Christian artist? I say, no, I'm just married to Amy.

In “A Letter to My Mama,” you apologize — “I'm sorry for being selfish.” Why?

I wasn't as good as I could have been. Dean Dillon and I wrote that song 18 or 19 years ago and I had forgotten about it. I sang it one day and a friend of mine who was dying of cancer made me promise to record it. I'm crazy about my mom. She's the most solid one of all of us. She's 93 and still in great shape.

I presume the song “That Old Man of Mine,” about killing “the meanest bastard I've ever seen,” does not refer to your father, does it?

No, I didn't kill him! There were elements of our relationship that were really, really tough, but that song is a murder ballad out of my imagination. I like those kinds of songs, like [Lefty Frizzell's] “Long Black Veil,” as morbid and dark as they can be.

VINCE BY THE NUMBERS 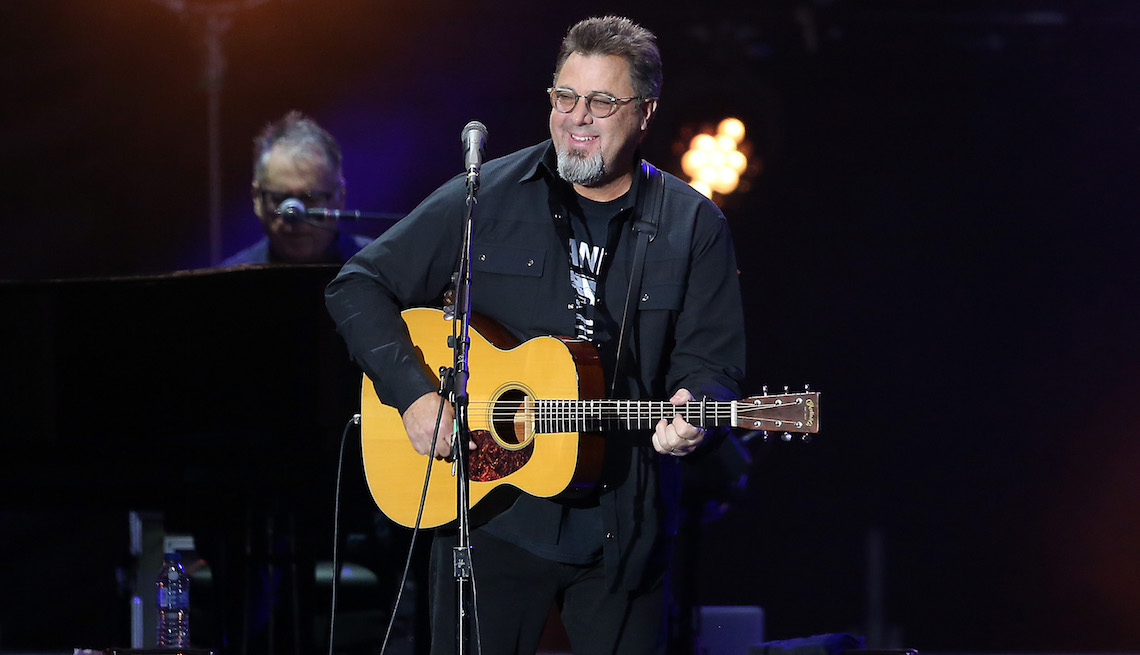 Grammy Awards: 21, more than any other male country artist

You've been playing with the Eagles for a couple years now. Is this going to last?

Yeah, I think so. It's been a great experience for me and I think for them too. The reason I'm getting to do this is because of something very tragic, the passing of a very good friend. I say all the time that I wish I wasn't doing this because Glenn would still be around.

Your career skyrocketed in the ‘90s and then leveled off. Did that relieve the pressure or increase it?

For the first seven or eight years I wasn't at the top of the charts, so I had a pretty good dose of reality. And I didn't let that period of great success be my defining moment. I'm singing better now, playing better now, writing better than I did when I was killing it. I'm grateful that I'm still improving.

You founded the Vinny Pro-Celebrity Golf Invitational, a charity tournament, in 1993, and you've been an avid golfer since childhood. What's the appeal?

I started playing at 5 or 6 years old. I was a junior golfer and competed in third, fourth, fifth grade. Every now and then I'd get my name in the paper. When I'm traveling as a musician, it gives me something to do in the daytime and keeps me out of trouble. It's a really creative game. And you can never master it, so it can drive you nuts.