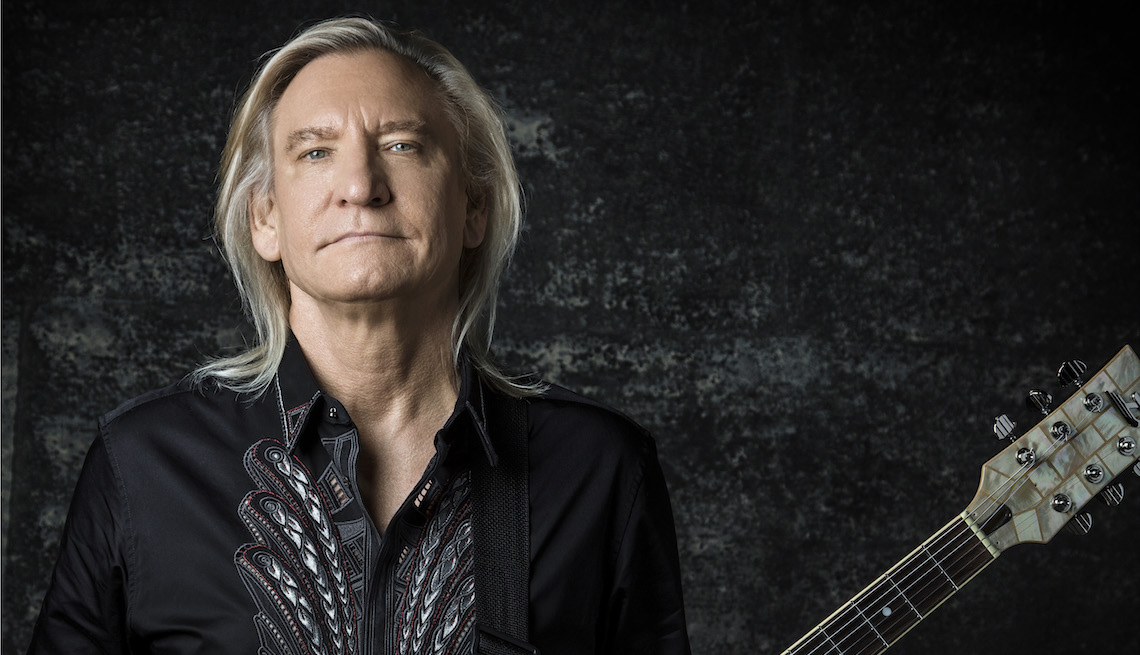 Life's been good, Joe Walsh will tell you. A long stint in the Eagles, 11 solo albums and such hits as “Walk Away,” “Funk #49,” “Rocky Mountain Way” and “Life's Been Good” brought him fortune and fame. But the rocker, 71, never forgot an early family tragedy, and that's why he's giving back.

A Gold Star son, Walsh was 20 months old when his father died in a fighter jet crash while on active duty in Okinawa. Stung by that loss, he's been involved with veterans’ causes for years, and frequently visits wounded soldiers, offering conversation and free guitar lessons.

In 2017, the musician launched a national nonprofit veterans organization, VetsAid, and staged an all-star concert to raise money for charities benefitting vets. The third VetsAid show will take place in Houston on Nov. 10, the day before Veterans Day, with performances by ZZ Top, Brad Paisley, Sheryl Crow, Jason Isbell & the 400 Unit, Walsh and more.

We talked to Walsh about his father, his dedication to veterans and what's next.

You didn't get to know your father, but what do you know about his service?

He was in the air force when it was a division of the U.S. Army. He was a flight instructor on Okinawa getting ready for Korea, which was about to blow wide open. He flew the first operational U.S. fighter jet. If you watch old Korean news footage and see one of our planes fly over, that's the plane he flew. When they say operational, that's about all it was. If you were a flight instructor, you were also a test pilot. Your logs went back to Lockheed, where they were constantly working to improve it. As far as we could determine, the plane was difficult in maneuvers. One day he didn't come back.

How did your family carry on?

In the ‘50s, they didn't have a Gold Star situation. It was just, “Oh, that's too bad.” I grew up without my father. And I always thought about him. My mother remarried when I was about 6 and I did get a wonderful stepfather. But there's an empty feeling and a sadness when a loved one doesn't come back from active duty.

What motivated you to establish VetsAid?

Vets are just great people. Whenever I was on tour, I'd go to Walter Reed National Military Medical Center where guys were getting rehabbed and fitted with prosthetic limbs. I'd hang out with them and really bonded. It seemed logical to me to start a charity. Between the West Coast and East Coast, there's a huge area with very little help for vets. If a vet comes home to Alaska, he's on his own and nobody understands his experience. Vets feel really alone. There are vet-run organizations throughout the Midwest that need help to keep going. That's what we've been able to do. I've seen great results.

You're not a concert promoter. How did you pull together such a great lineup?

The hardest part is the ask. You really have to humble yourself. It's awkward to ask somebody to play for something you believe in, but I'm getting used to it. I have a bunch of friends who are musicians, and we all try to help when we can. Across the board, veterans’ well-being is something most of us care about. That makes it a little easier. You just have to pick up the phone and say, “I'll owe you one.”

"...we fly in Gold Star families. We have a room at the concert for all the kids to get together. They can play video games and meet each other and share their experiences. It's healing to find out you're not unique and alone but that you're part of a family."

It's more than entertainment and fundraising.

We have a job fair the day before the concert that involves a lot of companies. Someone in a wheelchair can still be of great value in an office. And we fly in Gold Star families. We have a room at the concert for all the kids to get together. They can play video games and meet each other and share their experiences. It's healing to find out you're not unique and alone but that you're part of a family.

Where do you see the biggest needs for veterans now?

It really tweaks me to see a homeless vet with a cardboard sign. That should not be. The suicide rate is unacceptable. There are about 20 suicides a day for vets who have come back from the Middle East. We've tried to get a suicide hotline and suicide counseling. That's a real need. Also vets coming back (with PTSD), we try to get them together with dogs and horses. Being with animals does a world of good. The Fourth of July is not something a vet enjoys. With the fireworks going off, it's just constant red alert in their minds. Helping them transition back to civilian life, that's the hard thing. I don't put politics in any of this, but I would say the Veterans Administration is pretty dysfunctional right now. It's understaffed and the paperwork takes forever.

There seems to be a greater understanding of PTSD by both veterans and the public.

My grandfather was at the front in France in World War I and never talked about it. In World War II, I think there was a great amount of post-traumatic stress that wasn't diagnosed. My wife's dad got shot down over Germany three times and would never talk about it and never watched war movies. My generation was Vietnam. I went to college, but other guys I went to high school with went to Vietnam and came back different people. I think coming back from military service can be very complex.

Rock ‘n’ roll has a history of being anti-war, even anti-military. Did you ever feel conflicted?

I can't say I have any anti-war feelings. I do have feelings about the way the government makes decisions sometimes, but I think it's important that the United States has a strong military. I think more lives are saved than lost because of what we do. I'm really proud of my dad. I always just wanted to make him proud of me. Anytime I see people in uniform, I thank them for their service.

The Eagles just announced a Hotel California tour for 2020.

Bands that have been around for a long time have gone out and performed an entire album, and people really appreciate that experience. We realized we had never played Hotel California from the top to the bottom. It was a real challenge to us because we had never played some of those songs and we had to go back and learn them. Playing the songs in order, it's a pretty profound feeling. It's a real statement. And it's new to us. We have people who have been there for the whole ride and a generation of millennials coming to see us for the first time. That's a blessing. I'm 71, and I never thought I would get to now. But here I am. People are still coming. I'll play as long as somebody shows up.