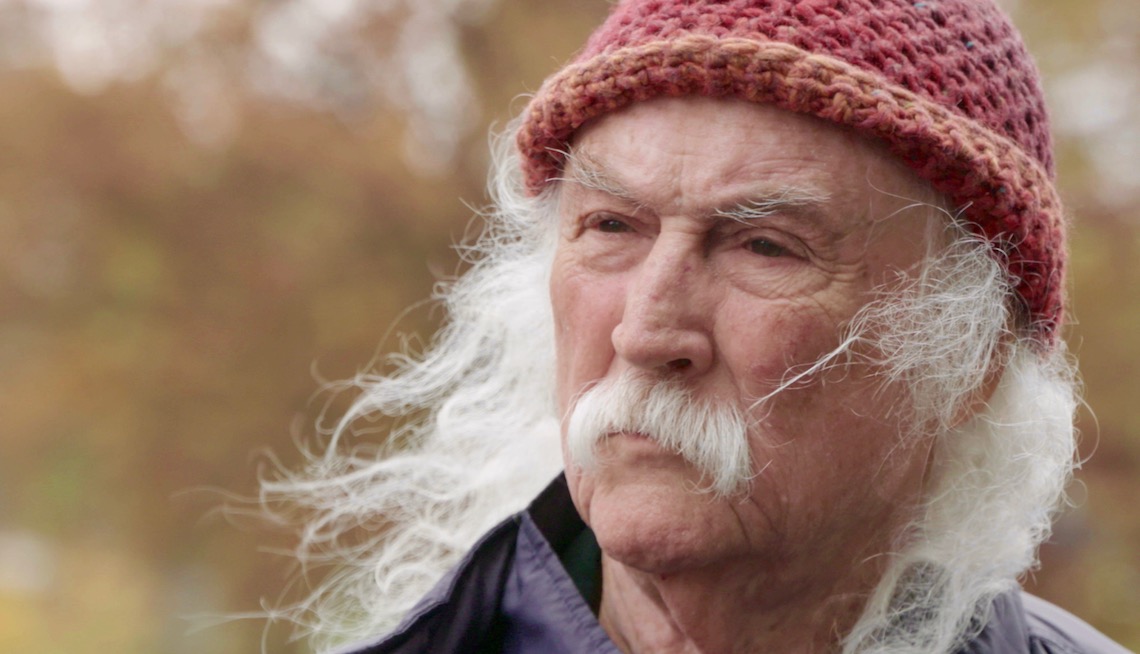 He's a diabetic with eight stents in his heart. He's had hepatitis C, a liver transplant and three heart attacks. How does folk-rock legend David Crosby carry on?

"I'm an insanely lucky human being,” says Crosby, the subject of a new documentary that presents an unvarnished portrait of the musician and his painful history with drugs, women and his famous bandmates.

"I've got a little bit of life left, maybe two weeks, maybe 10 years,” Crosby tells AARP. “What do I do with it? The only thing I can do is music. It's the only contribution I can make and the only way I can make anything better."

In David Crosby: Remember My Name, directed by A.J. Eaton and coproduced by filmmaker and rock journalist Cameron Crowe, the singer confronts his mortality and the wake of ruin left by years of drug abuse and callous behavior. The 77-year-old Crosby, whose long hair and Yosemite Sam moustache have turned silvery white, remains as irascible and blunt as ever. But sobriety and self-awareness have lowered his boiling point, and the blame and abuse he serves up now are directed at himself.

The 92-minute Remember My Name, which premieres in New York and Los Angeles on July 19 and expands to theaters nationwide in later weeks, follows Crosby from the pastoral home he shares with his wife, Jan Dance, in California's Santa Ynez Valley to gigs on the road with a band of young players to old Los Angeles haunts from his glory days.

Crosby joined the Byrds in 1964. He formed Crosby, Stills & Nash with Stephen Stills and Graham Nash in 1968, and they were soon joined by Neil Young.

"I let those guys down terribly when I became a junkie,” Crosby tells Crowe, who coaxes a steady stream of startling confessions from his subject.

"My dad never told me he loved me,” Crosby blurts at one point.

He assesses his failed romance with Joni Mitchell and details the trauma he suffered after girlfriend Christine Hinton died at 21 in a car crash, a low period that drove him to hard drugs.

"A friend of mine gave me a shot of heroin,” Crosby relates in the film. “Feels great, only the first time. After that, you're just trying to catch it. And you never get back there. Ever."

Crosby hit bottom in 1982, when he spent nine months in a Texas state prison for drugs and weapons convictions. His drug use continued. In Remember My Name, Nash and singer/songwriter Jackson Browne recall futile efforts at interventions.

After 40 years, Crosby, Stills, Nash and Young “didn't like each other,” Crosby says. “We've done terrible things to each other."

Angry that Crosby insulted his girlfriend, Young announced in 2014 that CSNY would never tour again. And after a wobbly performance of “Silent Night” at a 2015 Christmas tree-lighting ceremony before President Obama in Washington, D.C., CSN also pulled the plug.

Crosby states with resignation, “All the main guys I made music with won't even talk to me. All of them."

Crosby had no reservations about making this searing, unflinching account of his life and career. He and Crowe were determined to steer clear of hagiography and nostalgia.

"Most documentaries are very shallow and self-serving,” Crosby says. “You don't learn anything about that human being. ‘I invented electricity.’ So what? What makes that person do the things he did? What matters to him? We wanted to go deep. Cameron asked me the hardest things I've been asked in my life. It's a very strong dose.

"People who see it will take away the full picture of a human being, his accomplishments and his flaws, what he's proud of and what's he ashamed of."

What was Crosby's impression of Crosby after watching Remember My Name?

“I liked me after seeing it, which is kind of a miracle,” he says. “There's a certain catharsis. It lightens your load."

"I've been trying to earn my way back,” Crosby says. “I was a junkie, and it doesn't get lower than that. It took prison and 14 years of going to AA meetings. A trick you learn in AA is when you make a mistake, you have to look at it honestly and figure out how to avoid ending up in that little mess again. Then you have to set it down and move on. If you spend your life looking over your shoulder at your mistakes, you'll walk into a telephone pole."

Looking at mistakes meant addressing the women he had hurt over the years.

"When (Crosby Still and Nash) started out, we liked each other. Forty years later, it had devolved into ‘Turn the fog machine on and play the hits.’ "

"I was OK until I did hard drugs,” Crosby says. “I was selfish, and that's something I had to look at. I went to each one of them and said, ‘Listen, I'm sorry. I could have loved you better.’ I was not a good partner."

Crosby does not see a path back to his partners in CSNY.

"When we started out, we liked each other,” he says. “Forty years later, it had devolved into ‘Turn the fog machine on and play the hits.’ When people ask, my response is, ‘I never say never.’ But I think we should be proud and move on. My whole focus is forward."

"Those meet-ups usually go very badly,” Crosby says. “He gave me a clean slate. We're very tight. He is my best writing partner.” (Crosby also has two daughters from earlier relationships and his son with wife Jan, Django, conceived through fertility treatments while his liver was failing.)

He's planning to perform 60 shows through the summer, as much out of need as desire.

"Financially, I have to work all the time to not lose my home,” says Crosby, who argues that plummeting CD sales and negligible streaming royalties are forcing artists to tour nonstop. “I used to sail, but I had to sell my boat. I can't afford to take vacations anymore."

He's happy to spend free time at home, cooking healthy meals with vegetables grown on his land or fetched from local farmers markets. He avoids sugar and processed food. His weight has dropped to 180 pounds from 240.

In Remember My Name, he leaves home reluctantly for the next gig, and Jan worries that every trip might be his last. But Crosby says he wouldn't give up music for a guarantee of “extreme joy” at home.

"This is going to sound cosmic,” he says. “Music is a life force. It lifts us up. It's really all I have to give. As James Taylor would say, I'm trying to shed a little light."