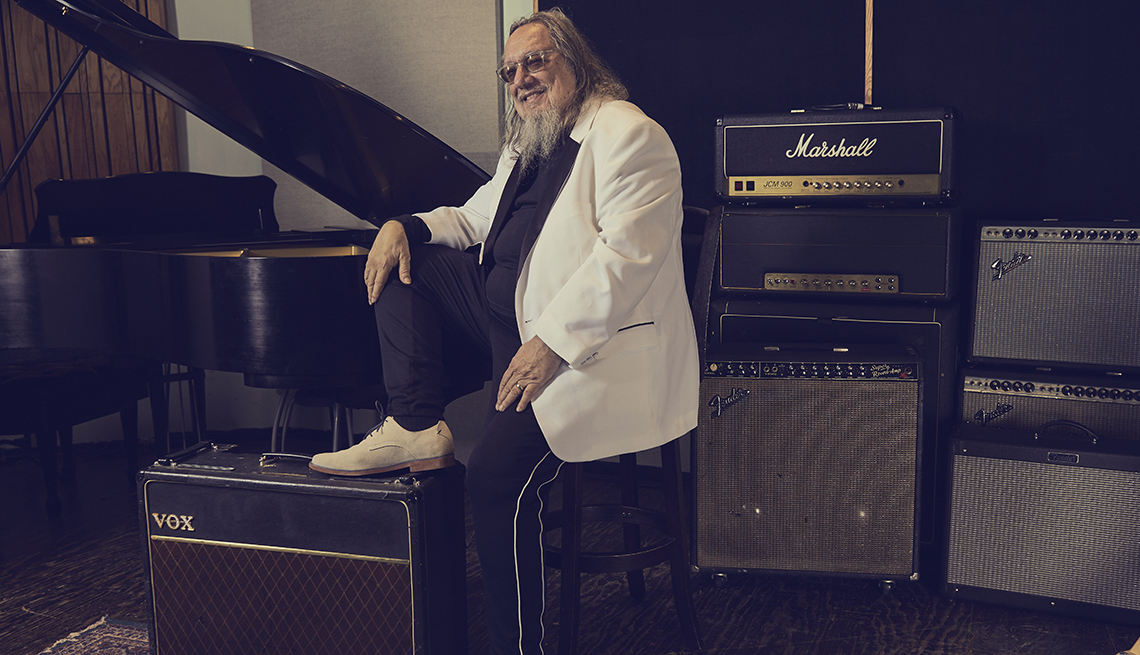 When I was in second grade, in Queens, New York, Elvis Presley was my hero. I bought his albums. I was first in line for his movies. I wanted to be him. My parents would bring the neighbors in, and I’d stand in front of our TV in my underwear, strumming a broomstick and crooning “Love Me Tender.” Later, at my bar mitzvah, I sang my haftarah—a selection from the Book of Prophets — doing my best Elvis impersonation. The head of the temple asked me if I wanted to be a cantor.

No way. So I put my musical career on indefinite hold. After high school I went to Queens College, where I was on track for a nice middle-class existence. Then I bought “Like a Rolling Stone” by Bob Dylan. That single changed my life. Instead of focusing on my studies, I started growing my hair long and going to see revolutionary bands such as the Fugs and the Mothers of Invention.

I somehow made it into grad school — where, perhaps aptly, I studied deviance and criminology — and volunteered as the music editor of the school newspaper, mainly so I could get free albums. That gig led to becoming a stringer for Rolling Stone, and before long I was writing a book about Dylan’s legendary 1975 “Rolling Thunder” tour, which also featured Joan Baez (who gave me the nickname “Ratso”), Joni Mitchell and Roger McGuinn of the Byrds. Traveling with the tour and watching these legends perform nightly was an exhilarating experience, and it moved me to try my hand at songwriting. On the train ride from Toronto to Montreal, I showed Dylan my first attempt at lyrics — a song about a seedy part of Boston. He looked it over as I waited nervously. Then, finally, he said, “Hey, this is good, man.” Coming from your hero, the simplest words of praise can make you feel like you’ve been nominated for a Nobel Prize.

With that validation, I decided to keep at it. Back in New York, I ran into the wife of guitar hero Rick Derringer, and the next thing I knew, I was writing lyrics for Rick. One night at the Lone Star Cafe, I met John Cale, who had cofounded the Velvet Underground, and we began a multiyear collaboration; I provided lyrics for three of his albums. At the time, I was also writing articles and books, but a piece of my heart fell for songwriting. It’s one thing to see your books in the window of a bookstore, but it doesn’t compare with sitting in the back of a club and watching John Cale sing your lyrics. My career as a part-time lyricist fizzled out, though, when Cale moved to L.A. in 1985.

Then, a few years ago, the journalist Mark Jacobson and I started doing a podcast from an East Village bar. One night Mark had booked two indie rockers, Timothy Bracy and Elizabeth Nelson, to perform on the show. Afterward they rushed up to me. “Ratso, we loved your Dylan book.” Flattery will get you everywhere with me, and the next thing I knew, I was hanging out with them in Brooklyn, soaking up the indie-music scene.

Of course, I was always the oldest person in the room, but that didn’t deter me. I just put on one of my wildest suits, donned my dark glasses and walked in like I owned every venue. My musical juices started flowing again. I dug up my old books of lyrics and decided I had to do something to get these songs into the world. My idea was to put out an album of other people singing my songs. I asked a new friend, singer-songwriter Vin Cacchione, if we could record a demo at his home studio in Bushwick so I could use it to persuade someone else to sing the song on my album. I didn’t feel any pressure. Hey, this was just a demo, right? Except when we were through recording, Vin threw me a curve. “Why are you going to give these songs to other people?” he asked. “You’ve got a unique voice.”

Hmm. “Unique voice”? Was that a good thing? I played the track for a successful producer I know, and he gave me the assurance I needed: “What are you waiting for?”

Vin and I got to work. Through my journalism and books, I know a lot of heavy hitters, and several were willing to lend a hand on the project, including Nick Cave, who sang a duet with me. Eventually, Vin and I had an album and then a record contract. Now we have a band, and we’re rehearsing to perform the songs live. I may have taken a 60-something-year detour, but I’m finally about to fulfill the dream of that little kid in his underwear strumming a broomstick. This time, though, I’m doing it with my clothes on — and in my own unique voice. n

Larry “Ratso” Sloman, 70, has authored 12 books, including On the Road With Bob Dylan. His album, Stubborn Heart, was released on April 5.