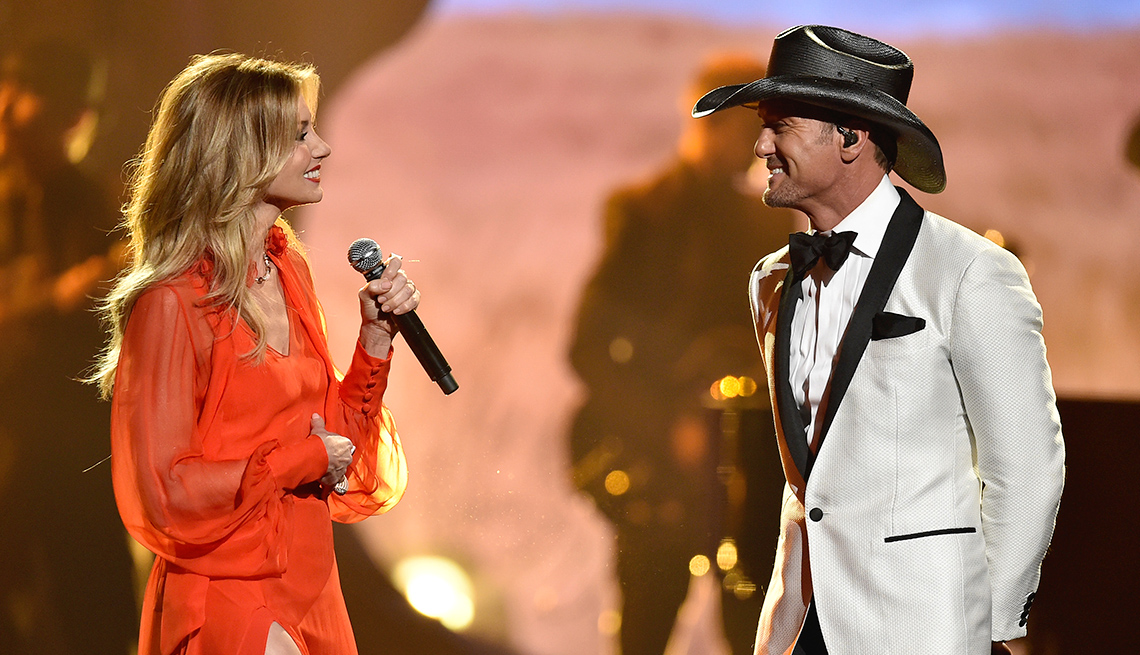 Faith Hill and Tim McGraw performed together at the 51st annual CMA Awards on Nov. 8 in Nashville.

They’re already country music’s most glamorous and recognizable couple but Tim McGraw and Faith Hill, both 50, are even more visible than usual now. They announced new dates in 2018 for their Soul2Soul World Tour, they'll receive Billboard's Legends of Live honor this week, they'll premiere a concert film on Showtime on Friday and on the same day drop a new album, The Rest of Our Life — their first together.

The duo, married 21 years and parents to three daughters ages 15 to 20, showcased the title single from the new album at the Country Music Awards this month and made headlines recently when they talked gun control with Billboard. Speaking less than two weeks after a shooter opened fire on a crowd at the Route 91 Harvest Festival in Las Vegas, killing 58 and wounding over 400, McGraw said, “Look, I’m a bird hunter — I love to wing shoot. However, there is some common sense that’s necessary when it comes to gun control.”

His wife agreed: "It’s everyone’s responsibility, including the government and the National Rifle Association, to tell the truth. We all want a safe country.”

McGraw has sold more than 40 million albums and Hill has sold over 20 million but the collaborative album is her first new studio release in nine years; she took time off to raise their girls. The Showtime special, Tim & Faith: Soul2Soul, airing at 9 p.m. Nov. 17, supports the release of the album, which is about how their love for one another grows as they get older. Their debut of the title track — cowritten by pop superstar Ed Sheeran, along with Johnny McDaid and Steve Mac — at the CMAs highlighted their considerable harmony as well as their palpable chemistry, not to mention their stunning good looks.

Their position on guns can be a difficult one to hold in the country music world, as the genre’s fanbase is generally more conservative on the issue. But the duo’s stance doesn’t seem to be hurting their star power. Their Soul2Soul World Tour, which kicked off in New Orleans this past April, has been a huge success, grossing over $71.3 million and selling over 838,000 tickets. And it’s not done yet – the success of the tour led the couple to add a second leg of 27 dates across North America, starting in Richmond on May 31, 2018.

This is the fourth time the duo has toured together. After beginning a romantic relationship on McGraw’s 1996 Spontaneous Combustion Tour (for which Hill opened), the two have coheadlined two other Soul2Soul tours, in 2000 and in 2006-2007, the latter of which became the highest-grossing country tour of all time with over $141 million in ticket sales. It is that massive success as live performers that is being honored at the Billboard Touring Conference & Awards. The Legends of Live Award recognizes the duo for “their professionalism and devotion to the art and craft of performance across their career.”