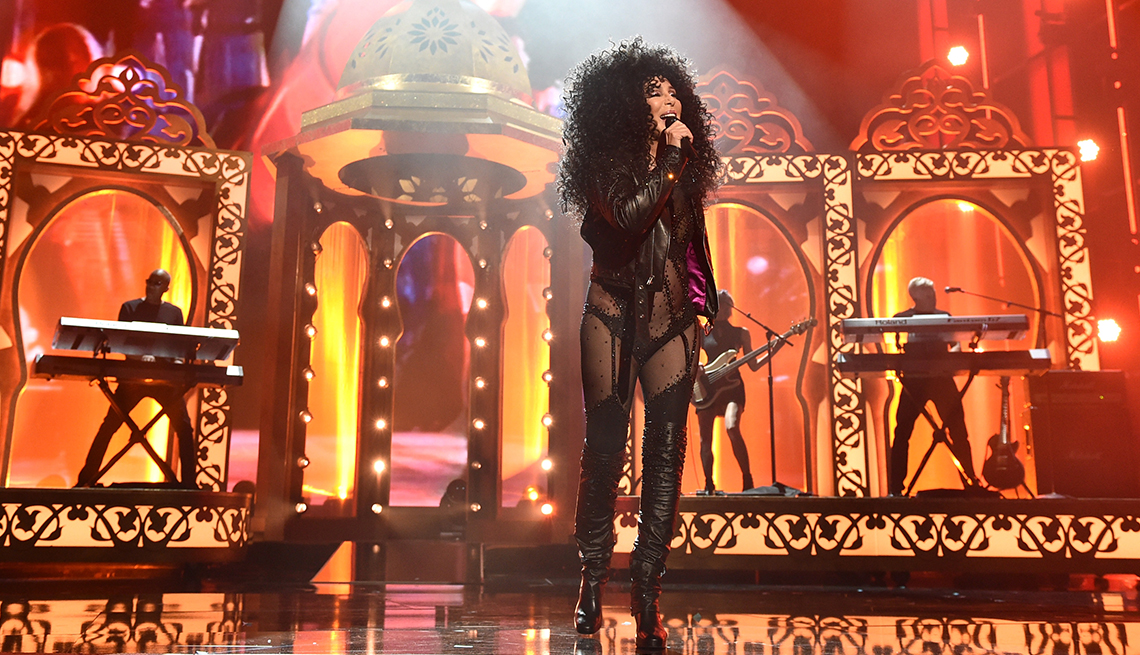 At 71 years old, Cher was honored at the Billboard Music Awards with its Icon Award.

Cher lived up to the title of one of her biggest hits last night, seemingly turning back time as she sashayed onto the stage at the Billboard Music Awards in two barely-there costumes, both of which would have qualified as daring on anyone, let alone the septuagenarian pop legend.

Cher, who turned 71 last week and received the Icon Award at last night’s Billboard Awards ceremony in Las Vegas, performed two of her most popular hits, “Believe” and “If I Could Turn Back Time,” with a Vegas-style costume change in between appearances. Both costumes bared enough skin to make even a showgirl blush. For the second song, she donned the same getup — black mesh stockings with leather jacket and thigh-high boots — that she wore 28 years ago in the original “Turn Back Time” (and controversial at the time) music video, which was set on the battleship USS Missouri.

Cher’s long and multifaceted career has always been marked by her revealing wardrobe choices, highlighted by the sheer black evening gown she wore when accepting her Best Actress trophy (for Moonstruck) at the 1988 Oscars. Clearly, the years have been good to the pop culture icon, whose fame has barely wavered over six decades of success in music, film and television.

Her brashness hasn’t faded, either. In her acceptance speech for the honor, Cher, who plays dozens of shows in Vegas when she’s not on tour, bragged about still being able to “do a five-minute plank.” But she was humble about the cause of her success.

“I think luck has so much to do with my success,” she told the celeb-packed audience, after accepting her award from Gwen Stefani. "I think it was mostly luck and a little bit of something thrown in."

“A little bit of something” would serve as an apt description of both of her costumes, which sparked a blaze of ecstatic reactions on Twitter and kept #IconCher trending overnight and into this morning.

“Almost 30 years ago I got on my knees and begged @Cher to do Turn Back Time a song she hated,” tweeted Diane Warren, the music legend who penned the song that sparked Cher’s comeback as a singer. “And she still looks (absolutely) amazing in that outfit from the video!”