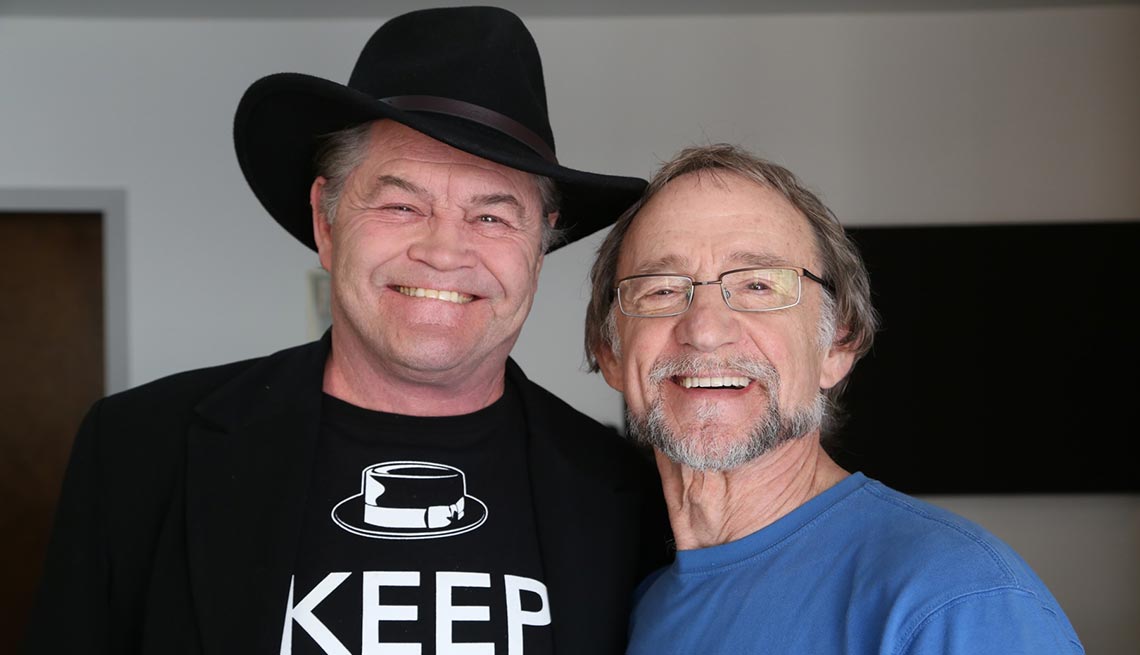 Micky Dolenz, Peter Tork, Davy Jones and Michael Nesmith rose to spectacular success with their popular '60s sitcom about a rock band, The Monkees. Dolenz and Tork, the two remaining band members, chatted with us about their 50th-anniversary album, Good Times, and their global tour together.

Talk about the making of "Good Times." The disc features some new tunes written by much younger pop stars as Paul Weller and Noel Gallagher as well as some never-released-before tracks originally recorded in the 1960s.

Dolenz: We had a lot of demos that we didn't finish back in the '60s. We found some amazing tracks. Some of them were half-finished. Some just had the lyrics and vocals, some without. There's a Carole King tune on the disc that was never released, a Neil Diamond song on which Davy sang. And the title track is a song that Harry Nilsson wrote; it features him singing and playing piano. It [also] has Mike Nesmith on guitar, and the Wrecking Crew [in-demand Los Angeles-based studio session musicians] on some of the other instruments. And it was multitrack, so I sang a duet with Harry on that. I just did a vocal on the Neil Diamond song featuring Davy.

What was it like singing on the tracks in which Davy was singing lead? Was it tough keeping your composure?

Dolenz: It was intense. I had a moment or two of wistfulness. Sometimes it felt like he has never left because we're still hearing him sing on these songs. I had to stop at one point during the recording to compose myself.

Tork: I had no reservations. It was just a straight-ahead "we're making this record" thing. The most interesting thing for me is that it's pretty early Davy, when he was singing in this high, Herman's Hermit singing style. His singing on the song has an eager teenager feel. But there was nothing spooky about the sessions featuring Davy.

In your estimation, what is the greatest contribution of the Monkees on American pop culture?

Tork: In those days, it was pretty well known among the kids — as we thought of ourselves in those days — that the established political hierarchy had completely lost it moral compass. It had no sense of what it was doing in terms of its job, which was to take care of the country. It had no sense of whom its children were, so we were left on our own. Before The Monkees, every TV show involving young adults or kids had a senior adult. Sometimes it was a buffoon; sometimes it was a wise doctor or something — like Father Knows Best or My Three Sons. The Monkees TV show had no senior adult figure. It was just us, except for the landlord who was a very minor figure. The Monkees demonstrated that it was possible for us to take care of ourselves without senior adult figures and be cheerful about it. The show was revolutionary in that sense.

Dolenz: Timothy Leary wrote a book called The Politics of Ecstasy, which contained half a chapter about the Monkees. He argued that we brought the longhaired kids into the living room. It's true. At the time, the only time you saw longhaired kids wearing bell-bottoms on television was when they were being arrested for one reason or another. So it was quite an accomplishment to just get this show on the air — a show about these four longhaired weirdos that were the masters of their destiny. It was debatable at the time if the networks would even put it on the air. Nevertheless, the show got on the air, and the kids related to us.