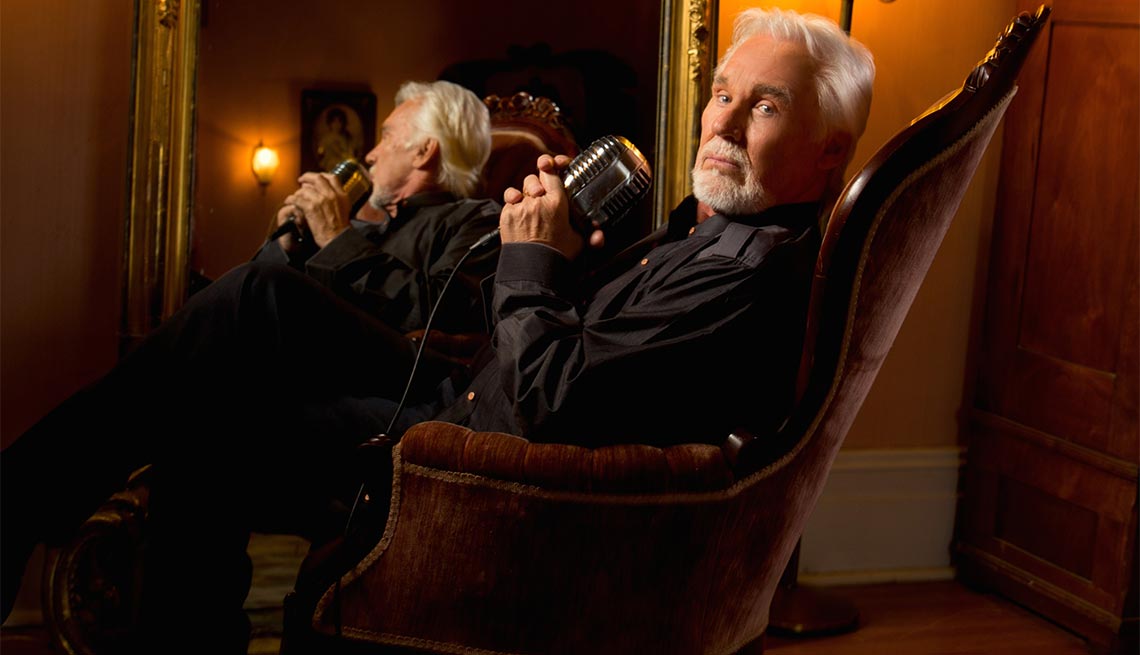 Kenny Rogers, who made the Don Schlitz composition "The Gambler" immortal when he sang it in 1978, has always known how to play his cards. Now, after decades of holding 'em, the 77-year-old Rogers is preparing to fold 'em:  May 15 was the start of his farewell tour,"The Gambler's Last Deal."

"It takes a lot of energy to make these trips around the world," says Rogers of the tour, which will crisscross the United States, touch down in Europe and Asia, and extend into 2017. "I had a knee replacement, so I like to tell people during my shows, 'If I fall down, don't feel like you need to help me up. I've got Life Alert.' "

There are two main reasons spurring his travel — and likewise his retirement. "I have identical twin boys, Jordan and Justin, who turn 12 in July," says Rogers. "I want to spend more time with them, and with my wife, Wanda. We all went on an African safari this year, and the boys literally cried when we had to come home. There's nothing more wonderful than going to unique places with your children."

The "Last Deal" concerts will showcase the many musical incarnations of Rogers' long career, from folk and country to jazz and pop rock. He plans to revisit his work with the Bobby Doyle Trio and the First Edition ("Ruby, Don't Take Your Love to Town"), along with solo offerings such as "Lucille." On duets, singer Linda Davis will fill in for Dolly Parton ("Islands in the Stream") and the late Dottie West. Each show will also feature a filmed thank-you to pioneers such as Kitty Wells, Waylon Jennings and Patsy Cline. "These are the people who believed in country music," says Rogers, "and stayed strong with it until it caught on."

Although that raspy voice made Rogers one of the best-selling artists of all time — three Grammys, 24 No. 1 hits, 120 million albums sold — he may be done recording. "The record business is different now than when I was coming up," notes Rogers. "People bought albums, not single-record downloads. And because they could listen to ten songs instead of one, they felt like they knew the artist better."

Of today's country stars, Rogers puts his money on Blake Shelton, Luke Bryan and Brad Paisley to have the kind of longevity he's enjoyed. Still, his favorite is Parton: Last year he raised more than $600,000 for her Imagination Library, which gives books to young children.

"Dolly's a very special person," says Rogers. "We did a video for 'You Can't Make Old Friends' that shows us together in lots of different situations, going way back. I watched it the other day, and it really touched me. She has the most honest smile of anyone I've ever met."

Fans associate one with the other so much that Rogers is constantly being asked, "Where's Dolly?"

"I told her, 'I get so tired of that question I'm going to start giving out your home number!'"

Another icon for Rogers: Prince. "I never met him," Rogers clarifies, "but through mutual friends I asked him if he'd write a song for me. About two weeks later, I got this song in the mail, 'You're My Love,' with a note saying, 'This is for you.' His death hit me hard."

Other luminaries have come into Rogers' orbit thanks to his passion for photography, which has produced four books. If Hillary Clinton gets elected, he points out, "She will be the fifth president I've photographed."

The singer also devotes time to raising money for the Kenny Rogers Children's Center in Sikeston, Mo. The hospital serves special-needs patients and their families at no cost.

Though Rogers has owned four airplanes over the years, his means of getting from one U.S. concert venue to the next will be much more down to earth: "I really enjoy my bus," says Rogers. "I sit there and watch the news all day. I have a refrigerator, a flat-screen TV and a chair that leans back. What else can a man need?"