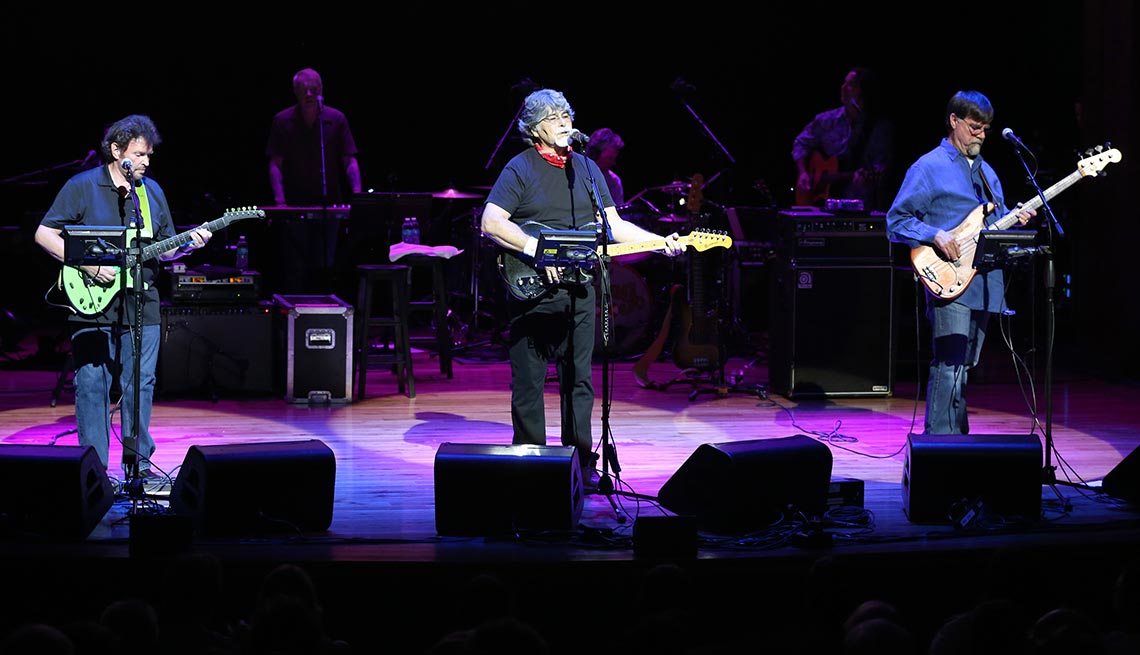 Alabama kicking off a year-long celebration of its history

Alabama, the most successful band in country music with more than 73 million albums sold, gets a special exhibit at the Country Music Hall of Fame this month, kicking off a year-long celebration of the group's history and roots.

Opening Aug. 25 and running until June 2017, "Alabama: Song of the South" is a gallery of musical instruments, personal mementos, stage costumes and awards — including three Grammys. The singers also will appear in concerts and educational programs throughout that span.

"This is a big deal to us," says bassist Teddy Gentry, 64. "It's humbling to be in the company of our heroes — and an honor that our kids, grandkids and great-grandkids can be proud of."

Made up of Gentry and two of his cousins — rhythm guitarist and lead vocalist Randy Owen, 67, and lead guitarist Jeff Cook, 67 — Alabama achieved national prominence in 1980 when "My Home's in Alabama" became a Top 20 hit on country radio.

Since its founding in 1969 (to play in a high school talent show in Fort Payne), the band has changed the game for country musicians: It fused elements of rock 'n' roll with country music, attracting legions of younger fans to the genre. Alabama was also one of the first country acts to incorporate arena-style production and stage movements into its shows, paving the way for country superstars such as Garth Brooks.

According to Michael Gray, curator of the Hall of Fame exhibit, "We thought they had a unique story, with their family harmony, their small-town Southern pride, their dogged determination and perseverance. We plan to focus on their early years, when they were still paying their dues."

Only Country Music Hall of Fame members are eligible for exhibit recognition, a distinction previously bestowed on Patsy Cline (1973), Marty Robbins (1982), Tammy Wynette (1998), Reba McEntire (2011), Kenny Rogers (2013) and other country greats. (Alabama was elected to the hall in 2005.)

Though Alabama staged a farewell tour in 2003, band members reunited in 2011 to raise money for tornado relief in their native state. Next thing they knew, country superstar Brad Paisley was on the phone, asking the group to sing on his track "Old Alabama" and appear in its video. At first, guitarist Cook confesses, they thought it was a practical joke: "A voice said, 'Hey, this is Brad Paisley,' and I said, 'Ri-i-ight.' "

"That sort of got us off the porch," says Gentry. Their comeback album, "Southern Drawl" — the band's first collection of original songs since 2001 — was released last year and reached No. 2 on Billboard's Top Country Albums chart. Alabama has also embarked on a concert tour, which will keep it on the road through the fall.

Gentry's hardscrabble upbringing — his family managed without running water — shows in the artifacts he's held onto through the years. His grandfather's Sears, Roebuck transistor radio, for example, was his lifeline to music as a child. Owen, who worked cotton fields as a boy, hopes the museum will spotlight "my grandmother's cookstove, or my papaw's mule-drawn wagon.

"I don't know what-all they'll use," Owen acknowledges. "Whatever they do, I'm going to be honored just to be part of it. You only dream about being in the Hall of Fame."