The slow and easy resurgence of an all-American troubador 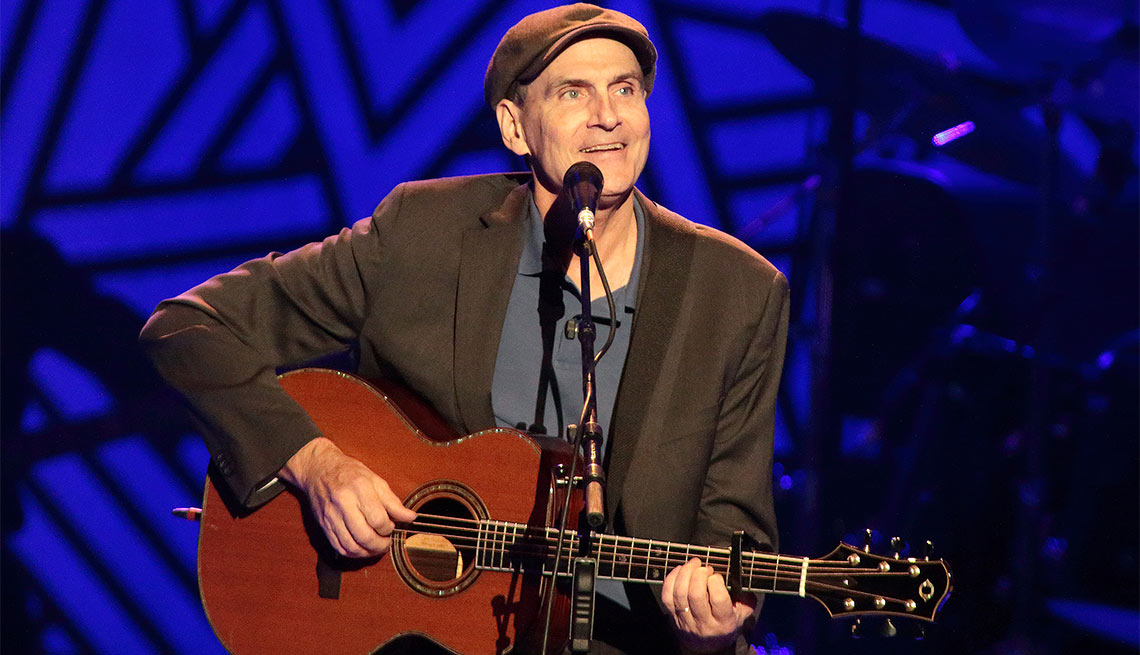 On March 12, some 1,800 fans packed Olympia Hall in Paris to hear James Taylor perform on his 67th birthday. To welcome the American songwriter on stage, the crowd sang "Happy Birthday" in French — Taylor speaks the language fluently — then applauded as his band trundled out a white fondant cake. Audience members also gleefully sang along on familiar songs throughout the show, occasionally calling out "Je t'aime, James!" Taylor thanked the throng for the "grand cadeau," or big gift.

"To have a musical conversation with this many people is profoundly rewarding," the soft-spoken Taylor remarked between swigs of water backstage. Dressed in a T-shirt and a newsboy cap, he had signed autographs and posed for countless selfies during intermission. Now he sat alone, buzzing from the crowd's energy.

For three hours, the lanky singer had charmed his audience with his trademark warm baritone. But no matter how calm he appears on stage, Taylor is anything but relaxed before a show.

"James always acts like it's his first big concert," says his wife, Caroline "Kim" Smedvig, who married Taylor in 2001. "Almost every single concert, he gets hugely jittery. He definitely feels the import of a place like Paris."

Music has been Taylor's salvation from a host of lifelong demons, so there's much at stake whenever he takes the stage. And on this day there was another reason to be nervous: Concord Records was preparing to release Before This World, Taylor's first studio album of new material in more than 13 years. Friends Sting and Yo-Yo Ma perform on the title track; Kim and their son Henry add their voices to "Angels of Fenway," about the 2004 World Series win by the family's beloved Red Sox.

"James was always at the top of his game," says close friend Carole King, "but he just raised the top to a new level. And his voice sounds better than ever."

Taylor wrote all but one of the 10 songs on the new record, most of which tap into classic JT themes: love, travel, a longing for home. There are bittersweet musings on what was and what might have been. And there are lots of goodbyes, even on the new album's first track, "Today Today Today."

When Taylor graced the cover of Time in 1971, he recalls, "It felt surreal." Outsiders might have concluded his career path would be smooth, but in fact almost nothing had ever come easy: "Fire and Rain" drew on his experiences in psychiatric hospitals and the suicide of a friend. "Focusing on recovery and making music saved me," he says.

For Before This World, he sought inspiration by holing up in friends' homes in Montana and Rhode Island for a week at a time. He begins the writing process by simply strumming his guitar, waiting for a riff — and eventually a song — to emerge. "The songs are whatever comes through," he explains with a shy smile. "It's a mysterious thing. There are lots of story-line songs, but all of them come from life — either how I experience it or observe it."

And, perhaps, from his reading — Thomas Mann, Tolstoy, Elmore Leonard and "a fair amount about religion: Everybody is spiritual to a certain extent," notes Taylor, "but I am very curious about religion. My dad was a scientist and an atheist, so I missed that boat young." 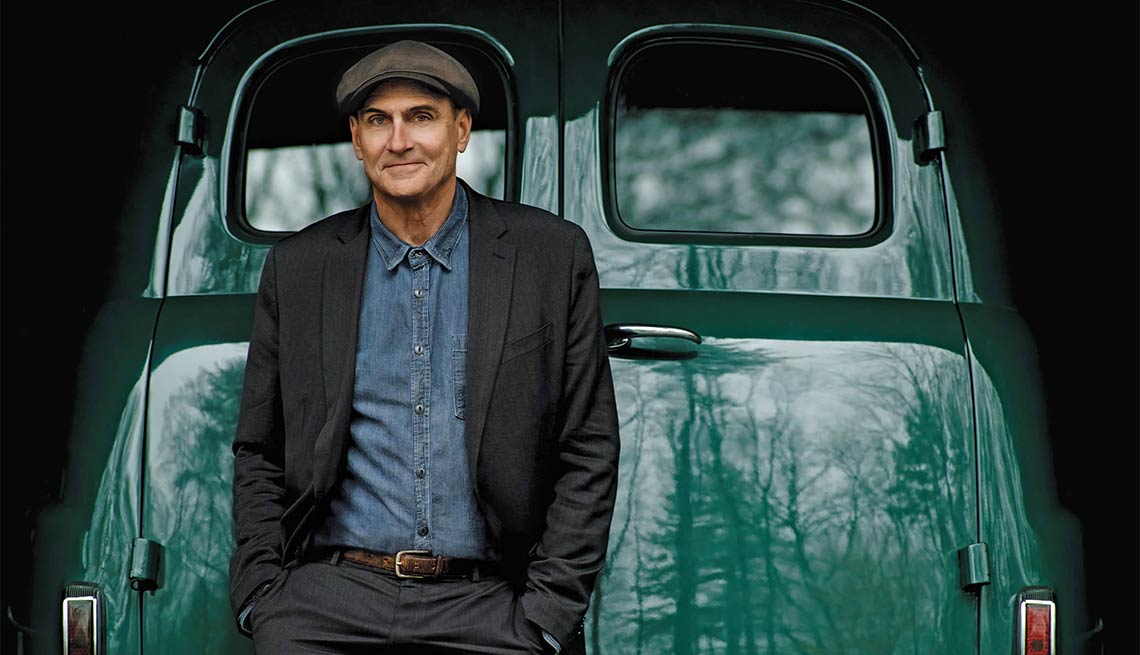 Taylor achieved his breakthrough in 1970 with the No. 3 single "Fire and Rain" and had his first No. 1 hit the following year with "You've Got a Friend", a recording of Carole King's classic song.
Timothy White

Discovered by the Beatles when he was 20, James Taylor has been making music for nearly 50 years. Beginning with Sweet Baby James — his second album, released in 1970 — his soothing voice and heartfelt lyrics have endeared him to millions. Critics declared the album, which went triple platinum, a folk-rock masterwork, and it made him an overnight star. Taylor would go on to sell 100 million records, win five Grammys and get inducted into the Rock and Roll Hall of Fame.

"There's an intimacy to his music that everybody feels," continues Carole King, who has toured off and on with Taylor since 1971 — the year he covered her "You've Got a Friend" and scored his biggest hit. "He makes you feel he's singing directly to you. The first time I heard him, he threw back his head and sang these notes and I thought, 'Oh my God.'" Their 2010 Troubadour Reunion Tour, which spawned a live album, sold 700,000 tickets and grossed more than $59 million.

Yet there were days when Taylor couldn't have dreamed of such love and acceptance, and much of his work reflects his troubled past.

His early childhood appeared serene. His mother, Gertrude (an aspiring opera singer), and his physician-father, Isaac (dean of the University of North Carolina Medical School at Chapel Hill), encouraged James and his four siblings to play instruments. He started out on cello, then switched to guitar.

But at Milton Academy, a Massachusetts prep school, he tumbled into depression. His father wanted his son to follow him into the sciences; James, feeling marginalized and alienated, had "a tough time finding a place in this world," he remembers. He sought ways to escape his family's expectations.

Taylor's grades began to slide his senior year, and he started sleeping 20 hours a day. Near the end of 1965, 17 and suicidal, he spent nine months in McLean Hospital in Belmont, Mass., where he was treated with thorazine.

His draft board classified him as unqualified for military service, which kept him out of the Vietnam War, and he received his high school diploma from the hospital-affiliated Arlington School. His brother, Livingston, and sister, Kate, would also spend time in psychiatric facilities. Father Isaac waged a fierce battle with alcohol, which eventually killed James' older brother, Alex; he died on James' birthday in 1993. (Taylor wrote "Sweet Baby James" for Alex's son, his namesake.)

"It felt like the whole thing blew apart between '65 and '70," Taylor recalls. "I was in my early 20s. I had a really rough stretch. I see it now as a typical adolescent emotional roller coaster, and that gave into a really hazardous addiction. So at the same time that I felt extremely vulnerable, I was hospitalized in various rehabs and my family came apart at the seams. My mom and dad split up. We left North Carolina and eventually moved up to Martha's Vineyard."

At McLean, Taylor discovered his love of songwriting. "Self-expression was a way of coping," he says.

Upon his release, Taylor moved to New York to become a professional musician. He got hooked on heroin within a year. "I learned a lot about music," he has said of that era, "and too much about drugs. I just fell into it. It was as easy to get high in the Village as to get a drink." 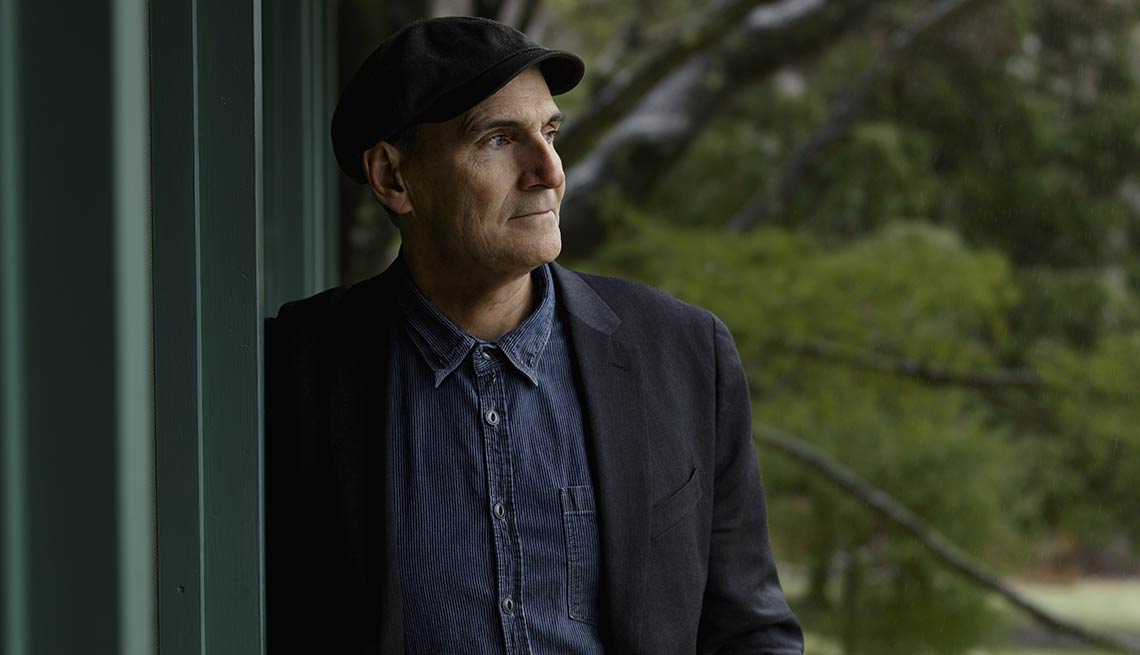 Taylor achieved his first number one album in the U.S. in 2015 with his recording 'Before This World'.
Timothy White

One especially bad night, he made a frantic call to his father. Isaac Taylor flew to New York and rented a car to bring his son home. A 1997 song, "Jump Up Behind Me," evokes that painful drive back to Chapel Hill.

Taylor continued to battle depression and addiction, enduring stints in rehab and five overdoses before finally getting sober in 1983. Three decades on, he remains mindful of keeping sobriety a priority.

"If you don't," says Taylor, "you can surprise yourself by how quickly it can come back and get you. There's an 85 percent chance that if you are an active addict, you will die of it. I have been in 12-step programs for 32 years. I go to meetings when I'm on the road. There are other people in our traveling community who go too, so we have support."

And much that is good has come of his struggle. "Fire and Rain," for example, forged a spiritual connection to millions of others wrestling with loneliness and loss — especially boomers. "The world was young," Taylor says. "The baby boomers surrounded me as a population, and I played to those people. To me, music offers an escape from the isolation of human consciousness."

In 1972, Taylor married singer Carly Simon. The couple recorded their biggest hit, "Mockingbird," two years later, and often performed together. Before the marriage unraveled in 1983, they had two children: Sally, now 41, and Ben, 38. Both are musicians.

A good place to come to

With his current wife, Kim, marketing director for the Boston Symphony Orchestra, Taylor looks happy." Kim understands what I do," he says. "It was one of those things that made our finding each other such a great match."

Just as Taylor's childhood home was filled with music, so is his own house in western Massachusetts today. Twins Henry and Rufus, 14 (born through a surrogate), sing and occasionally perform in a small band with their parents.

Her husband is "a failure as a disciplinarian," Kim laughs. "James is so loving and kind that he has a hard time drawing the line. I think because he is away a lot, too, he doesn't want to cause any upset."

Taylor tries to give his boys as normal a life as possible, often taking them hiking or sailing. "I think of myself as a working musician, as a father and husband, and as a recovering addict," he says.

To build stamina for his rigorous tour schedule, the singer cycles, rows and cross-country skis. He also does voice exercises regularly when not performing. "You sort of use it or lose it," he jokes. "I got that from Tony Bennett. He is my role model."

Though it's well past midnight in Paris, James Taylor's night is far from over. His tour manager, Chip, knocks on the door to say it's time to board the bus for the 11-hour ride to the next gig, in Barcelona.

Sweet Baby James reacts with gratitude, not fatigue: "I've been fortunate over and over again — to survive a suicidal adolescence, to find music at just the right time, to survive my addiction. I don't really feel I have anything I want to accomplish or need to do. I'm happy just to carry on."

Formerly an editor and writer for People magazine, Joanne Fowler is a London-based freelancer.