Sometime in the late summer of 1962, I realized that I was not cut out, mentally or physically, to play football. Preseason practice was hell. I wasn't afraid of hard work, but running laps in the 100-plus-degree temperatures of Texas summers until nausea or dizziness set in was not my idea of a good time. Neither was getting flattened by guys twice my size. The junior high coach, fresh out of college, was something of a stereotype: immature, mean and fond of dishing out corporal punishment, which, in those days, was perfectly acceptable. Players who neglected to hang up their practice uniforms would be summoned to a small enclosure in the locker room called the Cage. Once inside, they would be told to bend over and place their hands on their knees.

"Licks" were administered with a wooden paddle about the same length as a baseball bat, with holes drilled in it to cut down on air resistance and increase velocity when being swung. The number of licks a wrongdoer received was arbitrary, the coach's choice. I had always dutifully hung up my uniform, but one day I arrived at the locker room to find my equipment strewn on the floor. I looked around to see some of the older boys smirking, and I knew immediately what had happened. Then I heard a voice say, "Henley, the coach wants to see you in the Cage." I had a decision to make. I could go in and take a beating for something I didn't do, or I could hand in my resignation, which is exactly what I did. This, of course, was no great loss to the team, but, looking back, I have sometimes wondered if the coach was in on the whole thing from the beginning. If it was, in fact, his way of culling poor performers from the roster, he could have done it in a much more grownup, civilized manner by simply taking me aside and advising me to choose a different path. But I chose one for myself.

I could have ground out the remainder of my school years in PE class but, at the suggestion of a friend, I joined the high school marching band. I loved music and had always thumped away on my schoolbooks with pencils or beat out cadences on dashboards with my fingers. So I took up drumming. Having missed the first year of "beginner band," I was primarily self-taught. But I eventually landed the position of drummer in the high school stage band and in my friend's Dixieland jazz combo. From 1963 to 1970, this band went through several incarnations, eventually becoming one of the more popular locally based rock bands on the circuit. We wore out two Ford Econoline vans, driving all over the Texas-Oklahoma-Arkansas-Louisiana area, playing everything from smoky clubs to beer-soaked frat parties to fancy debutante balls to Knights of Columbus halls. It wasn't always fun and we weren't getting rich, but I was making enough money to support myself and pay a portion of my college tuition. The independence felt good. I was considered a long-haired freak in most quarters, but my parents were tolerant and proud.

One day in 1968, my bandmates and I chanced to meet Kenny Rogers in a Dallas clothing boutique. He was in town to do a show with his band, the First Edition, which was enjoying national success. We boldly asked Kenny to come and hear us play at a Dallas club and, to our surprise, he did. He was looking for artists to produce and he eventually got us a recording contract with a small Los Angeles-based label. We were over the moon about our good fortune, but there were a couple of problems. As his success continued to grow, Kenny was extremely busy touring with his band and promoting their recordings. He would have to find the time to produce our album. The fact that we lived in a small East Texas town, about 1,600 miles from Los Angeles, was also a challenge. We had, at intervals, lived in Dallas, but we were still basically small-town boys. We knew absolutely no one in L.A. except Kenny Rogers. 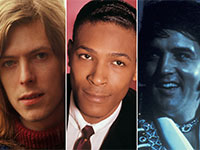 From The Who to Marvin Gaye, these deluxe music reissues will reel in the years for hours

But there was another problem, at least as far as I was concerned. In 1968, my dad's health had begun to fail. His decline was precipitous. Seemingly overnight, he went from running his business to being retired and housebound. Tests revealed that he suffered from acute atherosclerosis. Having lived through the Great Depression and always putting my mother and me first, he refused to spend money to get the best private medical care, opting instead to go to veterans hospitals, where he was treated with varying degrees of competency.

In addition to playing in my local rock band, I had been attending college since the fall of 1965. But as my dad's condition worsened, I decided not to return to college for the spring semester of 1969. During that historic year, while I sat at my dad's bedside in one depressing VA hospital after another, the Beatles gave their final performance on a rooftop in London; the Apollo 11 spacecraft carried the first men to the moon; thousands of young people flocked to Bethel, N.Y., to attend the Woodstock Music & Art Festival, and a war raged on in faraway Vietnam—a war to which I might still be called.

My bandmates and I had kept in touch with Kenny Rogers and, as 1970 dawned, word came that it was finally time to record in California. Kenny graciously offered to lodge us in his home during the initial sessions. Once again, I had a decision to make: Stay at home, maybe finish college and then … who knows what … or go for what was almost certainly a long shot in far-off L.A. My dad had already had one heart attack and it was hard to contemplate leaving, knowing I might not see him alive again. But he, along with my mother, had worked and saved since the day I was born, to give me opportunities that they never had, and they didn't want me to miss this one.

The album we recorded with Kenny wasn't successful (as songwriters, we were very green), but the project brought us to Los Angeles, where we were able to go on to other things. I will be forever grateful to my parents, my bandmates and Kenny Rogers—and to that junior high football coach—for the opportunity.