"I didn't want to take pop songs and turn them into jazz standards — instead I wanted to do these songs in a way that would honor the original writers," says Grammy winner Diana Krall.

Though best known as a jazz artist, Diana Krall has occasionally flirted with pop music in the two decades since she became a solo artist. Yet until the Feb. 3 release of her magnificent new disc, Wallflower, Krall had never released a bona fide pop album.

On Wallflower, Krall teams with legendary producer David Foster to deliver winning interpretations of songs by Bob Dylan, the Eagles, the Mamas and the Papas, Elton John and others.

In a phone conversation, Krall retraced the forces that inspired her to create Wallflower's unapologetically pop sound. She also revealed how she snagged a new Paul McCartney tune for the album and explained why hitting 50 last November was no big deal.

Q: Fifteen years into this new century, what inspired you to revisit pop music from the 1970s?

A: I've been performing "Wallflower" [which Dylan wrote in 1971] for about a year and half now. I love Bob Dylan, and I love that song. For the album, though, we didn't start out thinking, "We're going to do such-and-such an era." The disc does focus on those songs, but there's also a Paul McCartney song on it ["If I Take You Home Tonight"] that was written three years ago.

Q: Why did you decide to cover "If I Take You Home Tonight" on Wallflower? Did Paul McCartney write it specifically for you?

A: No. He wrote it for his disc Kisses on the Bottom. He played it in the studio when I was working with him on his disc and I really loved it. I never thought "If I Take You Home Tonight" fit in with the other songs on Kisses on the Bottom, but when I came across the sheet music for it I asked him if I could do the song. And he said sure. 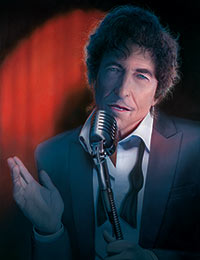 Q: What has it been like to step outside the world of jazz and make a purely pop record?

A: Not only did I play all these songs when I was a kid, but before I could make a living playing jazz I supported myself by playing pop music. So these are all songs that I know well. In that sense it wasn't so much stepping outside jazz as just going back to what I know.

Q: You ventured into pop on The Look of Love (2001) and experimented with Brazilian repertoire on Quiet Nights (2009). Did you take a similar approach with Wallflower?

A: There are definitely references to those two discs, but on Wallflower we did things so that it wasn't a radical change from the originals. Wallflower still sounds like music that I do. At the same time, I didn't want to take pop songs and turn them into jazz standards — instead I wanted to do these songs in a way that would honor the original writers. By keeping the original chords and not hipping them up too much, we hoped to make a beautiful record of the songs that I really love.

Q: Which track is closest to your heart?

A: I don't think you're allowed to ask me trick questions like that. [Laughs.] Seriously, though — I don't know! I like all of them.

Q: You were in the last wave of boomers turning 50 last year.

A: I still can't believe I'm 50, but at the same time I haven't given it that much thought. When you start obsessing about a certain number, you can put too much pressure on yourself and lose sight of your true goals — which, for me, are making sure I have as much time as I possibly can with my children and my husband, and playing music that I really want to play.

I feel like I'm moving backward a little bit — not physically, but from the point of view of what I need in life. I still want to play music, and I still want to do it really well.