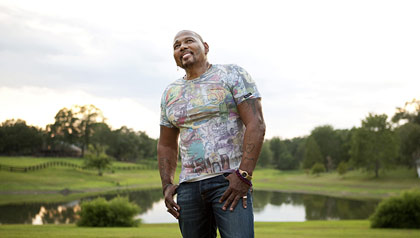 Musician Aaron Neville poses for a portrait in 2009 in Covington, Louisiana.

November was a hallmark month in the remarkable life of Aaron Neville, the platinum-selling solo artist and member of the Neville Brothers, who have personified New Orleans music for decades.

• Mavis Staples releases You Are Not Alone. Read

Arriving early in the month, I Know I've Been Changed marks Aaron Neville's third gospel album and first release on his own Tell It label, a sly reference to "Tell It Like It Is," the 1966 hit single that launched his career. Produced in artfully rustic fashion and featuring the piano playing of Allen Toussaint, with whom Aaron recorded his first single fifty years ago, I Know I've Been Changed is arguably the most musically satisfying album of the 69-year-old's career.

A few days after the album's release, Aaron tied the knot with photographer Sarah A. Friedman in New York. (Joel Neville, whom Aaron married in 1959, died of cancer in 2007.) These days Neville lives in Manhattan when he's not at his other home in Covington, La., north of New Orleans across Lake Pontchartrain.

"I'm a lucky man," Neville said of his upcoming nuptials, although something in his voice over the phone always suggests that trouble's just a misstep away.

Aaron lived much of his life on the wild side as a longtime heroin addict. Jailed for six months in New Orleans parish prison after being caught in a stolen car, Aaron thought it would be a good idea to tattoo a dagger onto his left cheek. His father made him try to scrub it off with a Brillo pad and industrial soap after his release, but it didn't come off. Over the years, however, the dagger has come to more closely resemble a cross.
Often airbrushed away, Neville's dagger-cross is evident in several of his wife's photos on I Know I've Been Changed, and appears iconically on the CD itself. His youthful folly is now an imposing brand.

Aaron wrote "Every Day" during that same stint in parish prison and recorded it at his first session with Toussaint.

"Every day about noon," he croons, "oh, how I'm dreaming of the day that I'll be home soon."

A similar yearning for a more peaceful place can be heard throughout his new album, beginning with its opening track. "When the storm of life is raging, Lord stand by me," sings Aaron, his angelic vibrato swooping and dipping and testifying in free time as Toussaint's piano, a female chorus and other instruments swirl about him. In case we'd forgotten, this is also Aaron's first album since Hurricane Katrina overwhelmed poorly constructed levees and flooded 80 percent of his hometown in 2005.

Despite his misspent youth, Aaron has long been the most devout of the Neville Brothers. "I used to sing 'Ave Maria' in church," he recalls. Even earlier, he says, "I'd sit with my grandmother and listen to the Soul Stirrers, Dixie Hummingbirds, Sister Rosetta Tharpe and the Blind Boys of Alabama." The doo-wop singing of groups such as the Drifters and the Spaniels was no less an influence on Aaron, as was the cowboy yodeling of Gene Autry and Roy Rogers he enjoyed at the movies.

Producer Joe Henry chose most of the songs on I Know I've Been Changed. Aaron was well-acquainted with songs such as "Oh Freedom," a mainstay of New Orleans funerals, but others were new to him. Henry dug deep in the treasure trove of gospel music, emerging with gems such as Big Bill Broonzy's "Tell Me What Kind of Man Jesus Is" and Mississippi Fred McDowell's "You've Got to Move," which Toussaint embellishes with a rollicking piano solo. Each track drips with feeling and resonates with the quiet, confident mastery of a nearly lost sound reclaimed.

I Know I've Been Changed was recorded quickly, over five days. The sessions were focused yet casual, Neville says. The interplay between singer and pianist is especially inspired, as befits their history.  The duo's relationship has long been more than musical, in fact: Toussaint and Neville co-founded New Orleans Artists Against Hunger and Homelessness in 1985.

Earlier this month Neville hit the road accompanied by brother Charles and a quintet for his annual Christmas tour. In addition to his new CD and a T-shirt emblazoned with his dagger-cross, Neville's merchandise table will also proudly display his new book of poetry, I Am a Song. These verses from the title poem recount the gospel truth of Aaron Neville's life:

The gift of singing that I have —
Is God-given.
Even with the way I walk,
God provides the rhythm.

So why don't we live
Together in sweet harmony,
So that our children of the future
May all be born free.
We're all a song.
So why don't we sing together?
There's nothing more on earth
That God would rather.

That all His children would live as one,
In harmony under His big, bright sun.