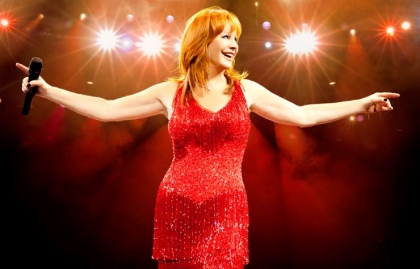 Reba McEntire performs on Sept. 11, 2010, in Nashville, Tenn., at the Bridgestone Arena.

When Reba McEntire was a girl, growing up on an 8,000-acre ranch in Chockie, Okla., she couldn't wait to get to school. "It was the camaraderie," explains the onetime tomboy, who spent her early years playing alone in the barn. "We didn't have neighbor kids, so school was where I got my buddies."

That long-ago memory is what stokes her excitement about Malibu Country, the singer and actress's new ABC sitcom, about a divorced mom from Nashville who moves to L.A. to reboot her country music career. Singing doesn't offer the camaraderie she gets from acting. "It's something that's wanted to come out ever since I was little, at playtime with another person," the spunky redhead recalls, her accent as thick as buttermilk. "That's what I absolutely love to do."

And it shows. Veteran comedian Lily Tomlin costars as McEntire's wisecracking mother. She admires the crooner's non-Hollywood approach to stardom: "Reba totally makes it fun. There's no ego. She comes in like she's a teenager, laughing, going, 'How are yew?' Or, 'He's a mo-ron.' That accent is to die for. And that little impish grin of hers cracks me up. She's just normal, but you'd hardly call her average."

Over four decades, McEntire, 57, has racked up 35 No. 1 songs; wowed critics with her Broadway performance in Annie Get Your Gun; and, along with her husband, Narvel Blackstock, 56, who manages her, developed her own eponymous line of clothing, luggage and household goods. In fact, she says, settling into the sofa in the conference room of her Starstruck Entertainment building in Nashville, "everything I'm wearing today" — from her flag-inspired blouse to her jeans and boots — "is Reba."

But Reba Nell McEntire has always committed herself to balancing "Reba," the hard-driving icon, with her family interests. Her father, Clark, was a world-champion steer roper, and Reba's earliest goal was to be a rodeo barrel racer. But Mama Jackie, who once wanted to be a professional singer, encouraged her children to live out that dream. When Reba and two of her siblings were teens, she helped them form a trio called the Singing McEntires. After cowboy singer Red Steagall heard Reba sing the "Star-Spangled Banner" at the National Finals Rodeo in Oklahoma City in 1974, he agreed, at Jackie's request, to try to get Reba a record deal.

Ten years later, when McEntire was named Female Vocalist of the Year at the Country Music Association Awards, she held up her trophy. "This is for me and Mama," she said.

In the beginning, she admits, she was woefully green. "All I knew is, you recorded a song and got on the radio, and you was a star," she says. "I thought, 'OK, I'm ready.' I wanted to be Loretta Lynn, Dolly Parton, Tammy Wynette, up there with that stature." Today McEntire holds the record as the female artist with the most CMA Award nominations (49), beating Parton (with 43). "It's not that I'm a better singer," she says. "Dolly is still my idol. I still have not passed her in my eyes." 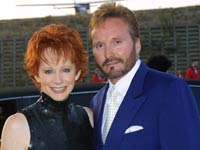 McEntire credits "baby steps" for her longevity, since success was slow in coming. Her first single came out in 1976, the year she married Charlie Battles, a national steer-wrestling champion. They managed McEntire's career from their ranch in Stringtown, Okla. But it would be seven long years before she landed her first No. 1 song.

By that time, Narvel Blackstock had been playing pedal steel guitar in her band for three years. Though he had dropped out of high school in the 11th grade, he impressed McEntire with his organizational skills and ingenuity, and, in 1984, she promoted him to tour manager. "We'd set on the bus, and he'd think of new things to do," she remembers. "It was just always another step higher up, getting better."

In 1987, McEntire's marriage to Battles ended. She wanted to focus more on music; he wanted her to stay home and help run the ranch. "I wasn't that little girl anymore, taking orders and doing what he said," she revealed not long afterward.

A year later, McEntire asked Blackstock to manage her entire career. By then she'd become a big star, her shelves crammed with awards. "God gave her vocal cords of steel," says singer Linda Davis, " but he also gave her a sweet style that sounds like nobody else." In the Nashville way of doing business at the time, that should have been enough.

But it wasn't for Reba. "Narvel became my manager because everybody kind of patted me on the head and said, 'You've done it. Good girl,' " McEntire explains. "They assumed I had peaked. Narvel was like, 'Oh, no, no, no, no, no. Here's what we could do.' "

In 1989 they married, and McEntire became a stepmother to his three kids, now grown. "I love those beautiful children with all my heart," she says. "We don't use the word step."

McEntire never yearned to have biological children, but early into the marriage she became pregnant. Shelby arrived in 1990. Two weeks later he attended his first McEntire concert. "From the minute I knew I was pregnant, he and I bonded," McEntire says with a smile. "It's a special connection."

"We're best friends," confirms Shelby, now 22 and the spitting image of his mother. "We always get along." He laughs. "At least 99.9 percent of the time."

As she did with her older kids, McEntire raised Shelby to respect right and wrong, and to have solid values. "I can't stand spoiled children," she says.

Shelby grew to appreciate such humility. When he was in high school, his parents bought him his first car — a V-6 Mustang. After that, says Shelby, "it's been, 'If you want it, you have to work for it.' "

Looking back, McEntire says her biggest problem as a parent was time management. When Shelby was little, the harried mom kept a grueling schedule — performing, then flying home to get her son up and take him to school. "I wanted to work," she says, "so I made the time to be with him and still keep a career."

Next page: From tragedy to "grateful happy camper." »

When tragedy struck in 1991, keeping busy helped her cope. A chartered plane carrying eight members of her road band crashed near San Diego, killing all. "She grieved like she had lost family," recalls Davis, who was part of her group at the time. But McEntire is enormously resilient. "She's a very disciplined woman," Davis adds. She assembled another band, dedicated her next album, For My Broken Heart, to her late fellow musicians and headed back out on the road.

Two years later McEntire unexpectedly veered in another direction. She'd always had a hankering to act, and in 1995 she played Annie Oakley in the TV movie Buffalo Girls. The role was a natural. "You don't want to be on her bad side," jokes Davis. "You know that shotgun? We used to do a lot of trap shooting, and she can hold her own when it comes to protecting herself."

Still, almost no one was prepared for McEntire's theatrical incarnation of the famed sharpshooter in 2001's Broadway revival of Annie Get Your Gun. Declared the New York Times: "Without qualification the best performance by an actress in a musical comedy this season." It was her first play.

"People said, 'Weren't you scared you were going to fail?'" McEntire remembers. "I'm not afraid of failure. I just want to try things. If they don't work out, I'll do something else."

Shelby was 11 at the time, and McEntire and Blackstock assumed he'd eventually follow his older brother, Brandon, who manages country singer Blake Shelton, into the business. But later, when Shelby was struggling with his grades in college, he made a deal with his mother: If he finished the year strong, she would send him to the Bob Bondurant School of High Performance Driving. The bet paid off. In another two years, he became a professional driver, racing in the Grand-Am series in Daytona and Indianapolis.

McEntire tries to arrange her schedule around his races. "When I found out I had interviews in L.A. the day he was running Indianapolis, I almost cried," she says. She suffers from some nerves as well. "You never quit worrying about your children."

Now a grandmother to five, McEntire plans to spend family time at her farm outside of Nashville for the holidays. Often, even in the middle of work, she and Blackstock will gather the whole brood and take off somewhere. "Narvel will go, 'OK, we've got three days; where do you want to go?' We keep it interesting."

So it's no wonder that McEntire says, "I love what I'm doing, and I love me in my skin. Of course, I'm still trying to figure out how to fix my hair, because I never learned that as a kid." She laughs. She keeps a bucket list: performing on Broadway again, traveling, and saddling up for a trail ride with her country music singing mentor, Red Steagall. And while she'd rather sleep in a hotel than under the stars, when asked to write the headline of her life right now, she offers a puckish grin and says, "I am a very grateful happy camper."

Country music, rock music, all kinds of music, movies and deals every day, on the AARP home page.