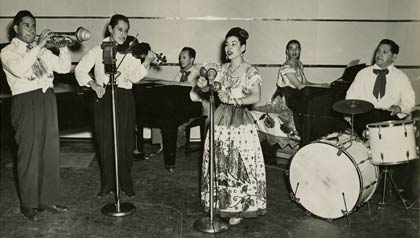 Photo by: Courtesy of the University of Texas at San Antonio Libraries Special Collections

En español | Alejandra "Alex the Jet" Rodriguez, 11, already has calluses on her delicate fingers. She plays accordion at Jovita's, an Austin club. Her aunt Mary Castillo's love of the queens of Tejano music who reigned in the 1930s and '40s led to Castillo signing Alex up for lessons with legendary accordion player Joel Guzman.

Tejano (Tex-Mex) music originated among Mexican Americans in Texas. Traditionally male-dominated, women had to fight for a place in the spotlight. The genre eventually produced the female artists Castillo revered and, later, superstars like Selena.

Alex says she doesn't expect to encounter the criticism her predecessors did — though men typically play the accordion. Her experience, she says, will be different: "Being a girl won't be a problem for me. I will play the accordion forever."

Lydia Mendoza learned to play the guitar on an instrument she fashioned from rubber bands and plywood. She memorized song lyrics, which at that time were printed on gum wrappers, then picked up the tunes from itinerant street musicians. Born in Houston in 1916, "La Cancionera de los Pobres" (singer of the poor) traveled with her parents between Monterrey, Mexico, and the fields of the Midwest. But they soon found they earned more playing music than picking beets.

A radio host discovered Mendoza when she was 18 and singing for tips with her family in San Antonio's lively Plaza del Zacate. She went on to cut the records that made her internationally famous — "El Tango Negro" and "Amor Bonito" among them — and lived long enough to perform at President Jimmy Carter's inauguration and receive the National Medal of Arts from President Bill Clinton in 1999.

"I saw Lydia when I was a little girl, in 1953," says Rosa Canales Pérez, 62, who left teaching at 51 and started a band that plays South Texas classics as well as her own compositions. "She stood in front of the red curtains and played solo. She played the 12-string guitar, which is my instrument. My middle name is Lydia, so I was fascinated by her."

The women of those times were pioneers, says Canales Pérez. "Tejano music to this day is pretty much a man's world."

Mendoza's husband, who repaired shoes for $7 a week in the 1940s, wanted her to end her career — until he realized the money she made would allow them to buy a car. Her in-laws never approved of her singing in public, Mendoza said during the taping of an oral history.

The popular Tejano songs of Mendoza's day were written and sung from a man's point of view and were often about women who cheated on their men, recalls Austin's Clemencia Zapata, 56, a singer and drummer in the band Conjunto Aztlan. "And then Lydia came out with ´Mal Hombre´ (bad man)," she says, strumming an imaginary guitar and singing the first few lines. "She took a man's industry and grabbed it by the balls. She said, 'I have a life too. My experiences are worth talking about.' She spoke the truth, from her heart."

When Consuelo "Chelo" Silva, born in 1922, was a little girl, she stood on a soapbox outside a cantina in her hometown of Brownsville, Texas, pretending she was the singer that the audience was listening to so raptly. In the school choir, the teacher always placed her back in the second or third row — her voice, she was told, overpowered those of the other children.

Silva longed to be the center of attention. Perhaps because they needed the money to support a family of seven children, Silva's parents bucked the taboo against women singing in public and allowed her to perform when she was in her teens. In the 1930s, she sang at clubs, at church and with the local Tito Crixell Orchestra.

The whiskey-voiced cabaret singer performed throughout the Western Hemisphere songs such as "Imploración" and "Soy Bohemia," which she sang with Mexican superstars such as Vicente Fernández. She signed her first recording contract at age 30.

She had two turbulent marriages, both damaged by her infidelity — one to famous folklorist Américo Paredes, and a short-lived one with the owner of a nightclub. Both husbands furthered her career — her first radio appearance was on a show hosted by Paredes. She and Paredes would travel to border radio station XERF in Villa Acuña, Mexico, across from Del Rio, Texas. That station, where disc jockey Wolfman Jack became famous, had a signal far more powerful than those allowed in the United States. Amateur and professional singers simply dropped in and performed.

Silva was a rebel in her personal and professional life. Her frank and sensual approach might have shocked her contemporaries, but she has inspired Clemencia Zapata. "Just listen to these words of hers," says Zapata. "'I've never been an open book, but for you I am/Fill my pages/Escríbeme.' Whew. That's hot."

Peter Gonzales Falcón, who has acted in many international films, recalls meeting Silva when he visited the Million Dollar Theater in Los Angeles. "Chelo had this blond bouffant hairdo, a comfortable dress and was drinking liquor; I forget what her drink was. She was onstage, in her flip-flops. She was surrounded by young men. She would motion to them and say, 'Vené, mis hijos! Todos son mis boyfriends!' I said to her assistant. 'She's just joking, right?' Her assistant laughed and said, 'No.'"

That rather naughty reputation follows her, even years after her death in 1988. When a website recently ran the poem "Bohemian Rhapsodies" by Rose Canales Pérez lauding the "Queen of Tejano," it was sharply criticized for publishing a poem praising her. How can you praise a woman of such poor repute, people said.

A promising national movie and singing career awaited Rosita Fernández. She was born in 1919 and, after moving from Monterrey, Mexico, to San Antonio with her parents in the 1920s at age 9, toured with her uncles in their Trío San Miguel.

"It was hard because of the social barriers against Mexican Americans and other minorities," she once said in an interview. "I remember when I would perform with my uncles in the surrounding towns. We couldn't even go into the restaurants to eat when we were hungry."

But that modest beginning, and a starring role on radio's Gebhardt Chili Show, propelled her upward. The songstress performed with Dean Martin and Joan Crawford, and was a guest on The Ed Sullivan Show. She appeared in The Alamo starring John Wayne and starred in the Disney TV movie Sancho, the Homing Steer. She recorded hits such as "María Bonita" and "Cuando Vuelva a Tu Lado."

But her husband's disapproval led Fernández to cut her film career short and remain in San Antonio. There she became known for headlining the city's famed Fiesta Noche del Río for 28 years and for appearing in ads for local tortilla brands.

Her husband, Raúl Almaguer, recalls in a 1999 interview that when he made Fernández quit working, "she became ill, actually ill, and I swallowed my ego and realized I was hurting our marriage and hurting her."

So the Rose of San Antonio returned to the stage, but she didn't go to Hollywood. "I decided that even though I knew I could make more money if I toured, I wanted to stay close to my family and not have to travel," she said in an interview.

Even staying close to home, she entertained five presidents and other U.S. dignitaries, Pope John Paul II and Prince Charles. Like Mendoza, she sang at President Jimmy Carter's inauguration. She performed for guests of President Lyndon Johnson at a 1968 event for ambassadors where Lady Bird Johnson dubbed her "San Antonio's First Lady of Song," and the title stuck. In 1982 a bridge on San Antonio's River Walk was named the Rosita Bridge for Fernández, who died in 2006.

What also stuck is the popularity of Tejano music, and the influence of Tejana legends such as Fernández, Mendoza and Silva still holds.

You may also like: Painter stamps Latin music legends into postal history.