"When I started liking opera, it was a time in Mexico when Jorge Negrete and Pedro Infante, two big singers and actors from the movies, had died," says Domingo. "I had the voice, was very young, and I said, 'I'm giving myself a limit. I want to make my debut at the Met [New York's Metropolitan Opera House] and at Italy's La Scala before I turn 30. And if I don't make it, then I still have time to do movies.' I made my debut at the Met at 27 and at La Scala at 28. So I forgot about [being a movie star].

Good thing, too. The Spanish-born, Mexico-raised singer now wears more sombreros than the idols of his youth: he's a singer, conductor, director, restaurateur, mentor, and humanitarian. Domingo takes on so many responsibilities that it seems impossible he can be good at all of them. Yet he is.

"What makes him so great is his drive and his personal energy and love for the art form," says Trevor Scheunemann, a young baritone who's known Domingo for several years. "He's an unstoppable juggernaut for promoting opera. He does it all, and I don't know how he gets the energy he does."

And he does it all without affectation. In person, Domingo is charming and attentive, his eyes lighting up with pleasure when discussing his favorite meal (gazpacho with paella and arroz con leche), soccer team (he's torn between Spain's Real Madrid and Mexico's Club America), or guilty pleasure (the soap opera Pasión, which features his niece Maité Embil).

As he walks through the bowels of the Met, he stops to chat with stagehands, security guards, and even a tour group passing by. "Plácido is always humble and deeply appreciative of his universal popular appeal," says Marc Stern, chairman and CEO of the Los Angeles Opera, where Domingo is general director. (Domingo is also the general director of the Washington National Opera.) "He's never lost that sense of where he comes from and how much he owes the people who work hard to help him succeed, whether they're our highest-level benefactors, our orchestra and chorus members, stagehands, administrative staff, or cleaning crew. He never loses track of his roots." 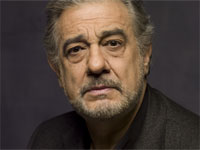 Domingo has been in the limelight for so long—he celebrates his 40th anniversary with the Met this year—that it seems he's always been with us. But even though he grew up in a musical family—his parents ran a small company specializing in the Spanish form of operetta known as zarzuela—opera wasn't his first love. First there was soccer, which Domingo thought of pursuing as a goalie. Then came the movies and the chance to be the next ranchera film star—abandoned when he met his self-imposed opera deadline.

Domingo began as a baritone. Then, at the advice of a colleague, he switched to tenor and quickly became noted for his performances in Tosca, Otello, and other works. In the early 1970s he began a conducting career and soon made forays into popular music. But he didn't become a superstar until the 1990s, when he teamed up with Luciano Pavarotti and José Carreras to form the Three Tenors. With Pavarotti's death and Carreras's career in decline, Domingo is easily the biggest name in opera.

He's taken advantage of his fame to encourage up-and-coming singers and to introduce opera to young audiences. He founded Operalia—an annual competition for young performers—and runs youth programs at the Washington, D.C., and Los Angeles operas. "We're worried [about attracting young people to the opera]," he says, "and we are doing something about it."

Domingo has also been involved in raising money to help victims of natural disasters in Mexico and Peru, and he is currently a spokesperson for, among other things, Hear the World, an initiative which focuses on hearing loss.

How does he choose charities? "Everything is important," he says, "and you have to choose those things that are not necessarily the more obvious things that might touch you. You see an unbelievable tragedy, and you immediately react."

But it's not that this human dynamo doesn't like to relax. During his vacations, he escapes to his house in Acapulco, where he spends time with his wife of 46 years, Marta Ornelas, and their sons: Plácido Jr., 42, a composer, and Alvaro, 39, a filmmaker who also books his father's Latin American engagements. Another son, José, a 50-year old businessman who was born during a prior short-lived marriage, also joins the clan. Watching television and going to the movies, the theater, and sporting events like soccer, Formula One, and tennis are Domingo favorites for relaxing.

When he's in New York City, Domingo drops by Pampano, a Mexican restaurant he co-owns with chef Richard Sandoval. "I'm not good as a cook," says Domingo. "One of the things for a cook is to have time, and that's one of the things I don't have." But he does, says his partner, have a phenomenal palate. "He knows what he likes; he's experienced a lot. He'll tell me what he wants to see on the menu. We'll be talking and he'll say, 'I came up with this idea of doing this sushi in a Serrano chili [sauce],' and I'll play with it."

Even though he has sybaritic appetites and remains vibrant, attractive, and in good voice, Domingo recognizes that aging brings change, something he's been dealing with for years. He has, for example, altered his repertoire—"I'm always searching for new things as my voice changes over the years"—and is contemplating what might happen as he gets older.

It's not that he wants to quit the stage, but performing makes incredible demands: the eight-hour-a-day rehearsals that can go on for weeks, the three-hour productions. "I don't know if I can go forward after 70," Domingo says. "I don't [mean] singing, but singing roles on the stage. I am healthy, but I never thought [at this age] I would still be singing at the Met."

Alvaro says that when Domingo finally leaves the stage, if it's a sad moment [for him], it's something none of us will ever see. "He's been gearing up for it for the past 25 years. He's been conducting, he has a lot of recordings to do, he has Operalia and concerts," Alvaro continues. "There's plenty to do. He'll probably be conducting the following night. He won't give us the chance to mourn that last onstage performance."

Plácido Domingo mentors youth, promotes hearing-loss prevention, and has helped during disasters. See how others demonstrate their humanity. —Brenda Durán

I like to give back to the senior citizen community. Seniors deserve it; they have worked all their lives. Now it's time to take care of them. They need someone to do things for them. It makes me feel proud to help my peers.

I've spent time reaching out to the young people in my community and letting them know they need to be doing something they love. I try to motivate them to volunteer. If we guide them, whatever community they go to will prosper.

Since my retirement 15 years ago, I have been doing a lot of volunteer work. I have been able to repair and paint houses for people who can't afford it. I have always felt the desire to help those in need. My father was the same way.

[In] my community, we were able to get teen moms back in school and graduating. I'm concerned about the youth. I've lived a long life. I have a lot of grandchildren and would like the world to be a better place for them.

These links are provided for informational purposes only. AARP does not endorse, and has no control over, or responsibility for, the linked sites or the content, advertisements, materials, products, or services available on or throughout these sites.