If you're a Beatles fan, check out these tunes and listen closely to see whether you can identify the influence of the Fab Four. It's easy — we promise.

Big Star never got its timing quite right. Alex Chilton had tasted early success at age 16, when he sang the hit single "The Letter" (1967) with the Box Tops. By the time he joined Memphis-based Big Star in 1971, however, its deceptively simple power pop had given way to more complex progressive rock from groups such as Yes and Genesis; boogie from acts like the Guess Who; and nascent metal from bands such as Black Sabbath. Long after Big Star's 1974 breakup, its vibrant sound would be rechanneled by bands such as R.E.M. and the Replacements. (That 70s Show features a Big Star song in its title sequence.) "September Gurls" is archetypal Big Star: Concise, to the point and impossibly catchy. The lyrics manage to be both sweet and melancholic. 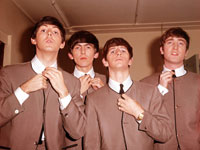 What would you do to support Social Security?

Troubled singer-songwriter Elliott Smith gained attention with his whispery, painfully confessional acoustic songs. Once he signed with a major label, however, Smith surprised many by going the heavily produced route — more "Sgt. Pepper's" than "Plastic Ono Band." Yet the ghost of the Beatles seems to hover over many of his compositions, notably "Say Yes": This poignant and complex ballad, featured in the film Good Will Hunting, shows how effortlessly Smith could match Lennon-like lyrics to a McCartney-style melody.

OK Go's awesomely fun videos deserve all the attention they get (treadmill dancing, anyone?). But the amazing visuals sometimes obscure the tremendous pop songs they're meant to illustrate. They've got good lyrics, tight playing and — as proved by "Here It Goes Again" — catchy hooks that grab you from the first note and keep you listening 'til the end.

Lead singer Michael Stipe famously claimed that he had never listened to the Beatles. He said nothing about his bandmates, though, who were obviously close students of the Fab Four. "Fall on Me" features a wonderfully unpredictable melody and some of the most intricate vocal harmonies of any post-Beatles rock band; listen for the three separate lines that seamlessly intertwine. Another big lesson R.E.M. learned from the Liverpool lads: It's fine to surprise the audience, but stay true to your artistic impulses. That's one big reason why R.E.M., IMHO, was the finest American band of the '80s.

When their debut album hit in 1990, no one would have predicted that these four guys from Liverpool would be just a flash in the pan. Titled simply "The La's," the album abounded with songs such as "There She Goes" that burrow under your skin and stay there forever — but in a good way. In the tradition of "Norwegian Wood," there's some ambiguity about what's going on in the lyrics: Is it a song about heroin, or just an inaccessible girl? One thing not open to debate: "There She Goes" is utterly beguiling.

Weezer is a band of music fanatics happy to pay homage to their sources of inspiration. Sound familiar? On "Buddy Holly" they name-check a certain forefather of rock, but the Beatles' energetic pop sense pervades every second of the song just as much as Buddy does. Plus the lyrics laud Mary Tyler Moore — and how can you ever do enough of that?

Like the Beatles, Wilco picks a few elements from Columns A, B and C, then mixes them into a sound that's familiar and accessible and all their own. Despite its title, "Heavy Metal Drummer" is a breezy tribute to childhood summers spent listening to favorite bands. It looks back toward the past ("I miss the innocence I've known") even as it creates something new.

Perhaps the most openly loyal Beatles fans of the post-punk era, Britain's XTC often wallowed in the psychedelic trappings of that formative band's "Magical Mystery Tour" era. On "Peter Pumpkinhead," however, they emulate later Lennon-style lyrics with shining mid-period Beatles harmonies and propulsive drumming. Andy Partridge even throws in some harmonica riffs reminiscent of "Love Me Do." Some things just always hit home.

You may also like: John Lennon lives on in the memory of fans.