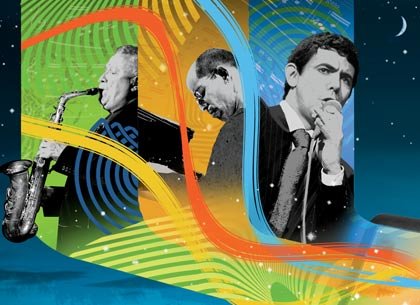 Sure, you can play a record any time of day, the 10-time Grammy Award–winning saxophone and clarinet virtuoso admits, but it’s under the stars, with moonlight reflecting off the waves and palm trees, that this soft romantic ballad can best evoke the magic that held Latin Americans spellbound for generations. “It's like bossa nova and filin,” says D'Rivera, referring to the samba-style sounds of Brazil and a style of Cuban music with roots in American blues and jazz. “It’s music for the night, to be enjoyed near water.”

It’s also music that could be in for a resurgence across the United States. A group of renowned artists has dusted off some of the most cherished ballads of the bolero era and blended their passionate rhythms with the progressive sounds of jazz for the Bolero Project, a fan-funded venture spearheaded by pianist Edward Simon and singer/percussionist Leonardo Granados as a tribute from the new generation of musicians to their parents.

D’Rivera is among them. Best known for his acclaimed ensembles of Latin jazz, D’Rivera accepted Simon's invitation to participate as a guest artist in the Bolero Project. As D'Rivera's former pianist, the two not only share a close working relationship, but D'Rivera has a long-standing affinity for the genre.

“I'm a bolero man,” says D'Rivera, who grew up and learned to play music in Cuba, bolero central during the genre’s heyday. “I love the sound of the old trios, with two people playing the guitars and maybe one playing the maracas; the sound of such groups as Los Panchos, Los Tres Caballeros, and Los Tres Ases.”

That sound—slow-tempoed and often accompanied with poetic lyrics voicing the longing, the bliss, and the torments of love—was part of the Latin American psyche for many decades, explains Simon.

“The bolero is Latin America’s romantic song. It was a genre that played a highly important role in our parents’ generation,” says Simon. “Today’s generations don’t seem to be aware of what the bolero is all about, and that's why we're rescuing it by giving it a more modern vision.”

This rejuvenated vision incorporates jazz in compositions that substitute guitar sounds for that of the piano, sax, trumpet, flute, and percussion. The result is a CD, to be released in June, followed by a brief U.S. tour, with destinations still to be determined. Other artists participating in the project include Granados’ brother Marco, who plays the flute; percussionist Pernell Saturnino; vocalist Brenda Feliciano; and trumpeter Diego Urcola.

Despite the alterations, the selected ballads will be quite recognizable. “The lyrics will be left intact,” says Simon. “What is going to change is the color, the surroundings in which the boleros will be displayed, the harmonies, and the concept. Jazz is a very open type of music that provides a great deal of space [for other types of genres to be blended in], so the ballads won’t be altered much. Jazz will only enhance their beauty a bit.”

Next: Restoring some of the old ballads. >>

As for the technical aspects of blending both genres, D’Rivera says it's quite easy. “I've been doing it most of my life.”

Simon—who has also performed alongside other renowned jazz musicians such as Herbie Mann, Bobby Hutcherson, and Don Byron—says that while he hasn't been playing boleros all of his life, like D’Rivera, it was the first music genre he came in contact with.

His father, an avid bolero lover, on occasion would ask his then 10-year-old son to sing a few ballads in front of his guests while he played guitar. The only problem was the boy hated it. “I used to hide during these parties to avoid having to sing,” he recalls. “Back then, I really couldn’t understand the meaning of a bolero and what it represented.”

That changed through the years, and when Granados came up with the idea of restoring some of the old ballads, Simon thought it a great way of paying homage not only to his father, who introduced him to music, but also to the bolero, which for decades taught Latin Americans the art of romance.

Granados, on the other hand, loved to sing boleros at a young age. He followed his father around the old town of San Pedro Del Río, in the Venezuelan highlands, as the elder serenaded the community with violin and guitars in the town square.

But unlike his father, a respected violinist who founded a music school in Venezuela, Leonardo showed from an early age a predilection towards singing, a preference that Leonardo’s mother, Marisol, says came from her side of the family. “That is something that I always tell him,” she says. “When it comes to the appreciation and the ear for music, I believe that comes from my husband’s side, but it's on my side of my family that we have singers.”

D’Rivera, on the other hand, when asked to play boleros, even incorporated some of the old sound into his own work. The 1992 recording, La Habana - Rio Conexión, for example, is a compilation of boleros and bossa nova instrumentals. “I always have a little bolero somewhere nearby,” he says. “It has always been present in me. Boleros are a way of life.”

Next: How to sponsor Bolero Project CD. >>

Bolero fans can do more than just purchase the Bolero Project CD. ArtistShare, an interactive online platform, allows fans to become sponsors—similarly to how the Medici family of Italy sponsored the great artists of the Renaissance—and gain access to the creative process.

Depending on their degree of sponsorship, participants can receive an autographed and personalized limited-edition Bolero Project CD, obtain iPods pre-loaded with the artists’ favorite music, receive the original signed music chart used in the recording session, get complementary admission for one year to any performances, and even gain a credit listing as executive producer on the new recording, says Leonardo Granados, the project’s main vocalist.The online platform, he says, frees musicians from some of the limitations imposed by traditional recording companies. Since artists obtain the financial support of their followers in the early stages of the process, they can concentrate more on producing the most appealing work with less consideration given to whether it’s marketable.

“From the start, we wanted to avoid the limitations to the creative elements in our work,” Granados says. "ArtistShare’s platform grants us the freedom to work on a product more in line with our conception, our feeling, and our artistic inclinations.”

You may also like: Johnny Pacheco — King of Salsa.