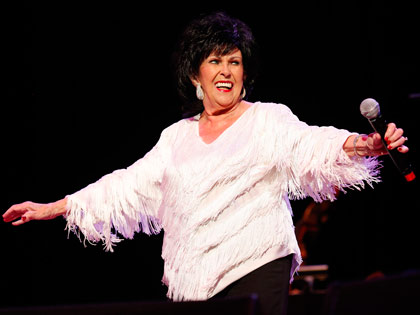 Wanda Jackson performs during The Americana Music Awards at the Ryman Auditorium in Nashville, Tenn.

When a petite 73-year-old woman sporting big jet-black hair and a sparkling, fringed white sweater demands to know if you're "ready to rock," you sit up and pay attention.

Wanda Jackson on the Town Hall Party show in 1958

And that's exactly what her much younger audience did when rockabilly queen Wanda Jackson stepped onstage at Brooklyn's Music Hall of Williamsburg. The world's first female rock star was making her public debut with a 10-piece band led by guitar hero Jack White (of White Stripes fame), who produced and arranged Jackson's wall-shaking new album, The Party Ain't Over.

It's tempting to suggest that The Party Ain't Over marks a comeback for Jackson, who switched from country to rockabilly during her teens at the urging of a guy named Elvis Presley (whom she also dated) — but it wouldn't be accurate. Jackson has been on the road throughout her life. Born in 1937, she released her first country singles while still in high school and hit the Top 40 in 1960 with "Let's Have a Party." She's big in places such as Sweden and Japan, where her "Fujiyama Mama" was a hit in 1958, and she'll be rocking across the USA throughout February.

Jackson's recent surge actually began in 2009, when advocates such as another Elvis (Costello) and Bruce Springsteen facilitated her induction into the Rock and Roll Hall of Fame. Jack White, who'd produced Loretta Lynn's Grammy Award-winning Van Lear Rose five years earlier, asked Jackson to record a vinyl single for his Third Man label (motto: "Your turntable is not dead"). On one side, Jackson purred and shrieked her way through the rock 'n' roll evergreen "Shakin' All Over," a driving highlight of the duo's live shows; on the other, she found a perfect contemporary vehicle in British bad girl Amy Winehouse's hit, "You Know I'm No Good."

But Jackson was always "good," even when she rocked. Her mother made the sexy short skirts and fringed shirts she wore onstage, and her father was both her manager and chaperone. A glamorous, sexy girl able to hold her own on tour with Elvis and Jerry Lee Lewis, she's also a devout Christian whose 50-album discography contains many releases of a sacred nature. White suggested that she record the Louvin Brothers' "Dust on the Bible," which turned out to be a song even Brooklyn's hippest audience could get into.

A recent documentary about Jackson is titled The Sweet Lady With the Nasty Voice, which just about sums her up — except maybe for the "sweet lady" part, she has noted. OK then, try "an atomic fireball of a lady," which is how Bob Dylan has described her. In person, White played the rambunctious pup to Jackson's maternal dignity. The band, dressed in matching vintage suits, was loud and loose. Jackson belted out "Funnel of Love," "Mean Mean Man" and her country hit "Right or Wrong" as though they'd been written yesterday. Following an encore, Jackson's husband of some 40 years escorted her slowly up a short flight of stairs while the crowd screamed for more.

But Elvis' former girlfriend had left the building.