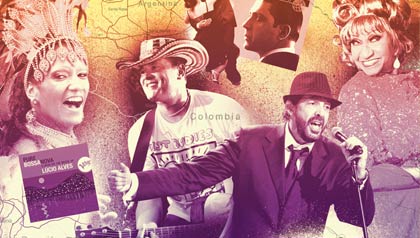 En español | If there's one element that defines Latin American music, it is its richness. From Brazil and Argentina to Cuba and Puerto Rico, the soundscapes are endless—evoking a kaleidoscope of feelings, moods, and textures. And although Latin America has produced its own giants in the genre of classical music, it is the rhythms and melodies of its people that have captured the hearts and souls of fans in other parts of the world. Specifically, the recordings made between the 1950s and 1970s reflect a golden era, a time when such enduring icons as Tito Puente, Los Panchos, Antonio Carlos Jobim, Celia Cruz, and José José created their best works.

In the United States, official recognition of the diversity of Latin music is evident in the increased number of Latin categories in The Recording Academy's Grammy Awards and the creation of the Latin Grammy Awards in 2000.

Let's take a brisk tour through the major genres and styles of Latin music, focusing on a few essential albums that are guaranteed to take your breath away.

Don't Cry for Me, South America

Argentina is the home of the tango, the music of European immigrants who brought the sweet-sounding, accordion-like bandoneón from Germany. Tango is bitter by nature—a reflection of endless nostalgia for the homeland. Carlos Gardel is an inevitable reference. The Best of Carlos Gardel (Blue Note, 1998) includes such tango anthems as "Mi Buenos Aires querido" and "El día que me quieras." Of equal importance is Astor Piazzolla, the temperamental genius who updated tango through the influence of jazz and classical music. A nocturnal masterpiece of moods, his Tango: Zero Hour (Nonesuch, 1986) is the place to start. Although tango is known as a macho genre, many female vocalists blossomed in it: both the sassy Tita Merello and raspy-voiced Adriana Varela are indispensable.

Even by Latin American standards, Brazilian music delivers an embarrassment of riches. It all begins with the lilting samba, a song format that through the juxtaposition of bouncy beats and bittersweet melodies manages to sound wistful and uplifting at the same time. Crooner Lúcio Alves recorded a number of stunning LPs during the fifties—the compilation Pure Bossa Nova (Verve, 2006) is a dreamy delight. During the sixties, the bossa nova (a jazzier, highly sophisticated version of the samba) took over the world through the breezy "Garota de Ipanema," the Antonio Carlos Jobim composition performed by João and Astrud Gilberto with American jazz tenor saxophone giant Stan Getz. It is the opening track of the classic Getz/Gilberto (Polygram, 1964) LP—a bestseller to this day.

Next: Caribbean rhythms: From cumbia to merengue. >>

South America's other musical giant is Colombia, birthplace of the bouncy cumbia and the hot vallenato. Cumbia is the perfect distillation of the three contrasting cultures that collide within Latin American music: European melodies, African rhythms, and an indigenous sensibility. There are dozens of excellent cumbia ensembles, from the authentic folklore of Totó La Momposina to the unabashedly commercial hits of La Sonora Dinamita. One of the best primers is Greatest Cumbia Classics Of Colombia, Vol. 1 (Discos Fuentes, 1997), a record that dares you not to dance.

The vallenato, on the other hand, originated from the region of Valledupar. It fuses addictive accordion melodies with soulful lyrics. In the nineties, singer/songwriter Carlos Vives resurrected the vallenato aesthetic with touches of rock and pop. The seamless El amor de mi tierra (EMI Latin, 1999) may inspire you to explore the works of genre godfathers like Diomedes Díaz and Lisandro Meza.

Colombia has also developed its own brand of tropical dance music. Here, the presence of Joe Arroyo is of particular importance. A brilliant singer and composer, his Grandes éxitos (Discos Fuentes, 1999) includes 12 classic tracks, with the historically flavored "Rebelión" a dance-floor scorcher.

A Night in the Caribbean

Many people think of Cuba as the jewel in the crown of Latin music. Not only has the island produced thousands of unforgettable records, but it is also responsible for creating genres that would blossom and develop in other countries: son, cha-cha, mambo, bolero, rumba, and danzón, to name a few. Infinitely warm, the protean son is the basis for everything else that followed it. Troubadours like María Teresa Vera and Sexteto Habanero were its pioneers. But in the late nineties, American guitarist Ry Cooder assembled a choice group of veteran musicians for one of the most unexpected success stories in pop history: Buena Vista Social Club (Nonesuch, 1997). For once, here's an album that deserves the hype associated with it: sweet, joyous, timeless, and boosted by the luminous piano work of the late Rubén González.

In the fifties, during the golden era of Cuban music, Orquesta Aragón perfected the charanga aesthetic—not a song format per se, but rather a type of band, anchoring its sound on lush swashes of violin and acrobatic flute melodies. Cuban Originals (Sony International, 1998) delivers nuggets like the wide-eyed "El bodeguero." During that time, La Sonora Matancera developed an endearing combination of tropical formats with pop, the rustic rhythm section sharing the spotlight with no-frills trumpets. Boasting such singers as Celia Cruz, Carlos Argentino, and Bienvenido Granda, the orchestra recorded a battery of hits, some of which can be found on Serie nostalgia: Éxitos originales, Vol. 1 (Fonovisa, 2009). Beny Moré, Pérez Prado, Arsenio Rodríguez, and the underrated pianist Peruchín also occupy a place of honor in the pantheon of Cuban music.

Perhaps the one Latin rhythm that is easiest to dance to is the sticky merengue. Born in the Dominican Republic, the modern merengue is made instantly recognizable by its 2/4 beat—performed on the guiro and tambora drum—and staccato brass riffs. The other popular Dominican export is bachata, also known as la música del amargue (music of bitteness). Here, bitter lyrics of tragic love affairs are embellished by spiraling guitar lines and soft bongo beats. On the commercial side of Dominican pop, Antony Santos includes both merengue and bachata on the memorable Sin ti (Plátano Records, 2003).  A more cosmopolitan approach is favored by singer/songwriter Juan Luis Guerra on Bachata rosa (Karen, 1990)—a revisionist effort to enhance bachata's appeal with jazz harmonies and poetic lyrics.

Next: Mexico: The land of rancheras. >>

Boasting a polka-like beat and tuneful accordion melodies, norteño is hugely popular. One group rises comfortably above all others: Los Tigres Del Norte, whose double-CD Jefe de jefes (Fonovisa, 1997) is a bona fide norteño masterpiece. Emerging from the state of Sinaloa and spreading throughout Mexico and the U.S., banda sinaloense is larger-than-life, often boasting more than 40 musicians onstage. The sound is opulent and somewhat frantic, combining syncopated drum rhythms with bursts of tuba and clarinet. The punchy Con la banda...el recodo!!! (Sony International, 1998) finds pop star Juan Gabriel teaming up with the biggest banda of all.

Puerto Rico occupies a unique place in the continent's music history. Besides boasting its own brand of danceable folklore—the plena and bomba, luscious styles in their own right—this Caribbean island was instrumental in the development of the pan-global genre known as salsa.

The salsa explosion of the seventies took place in New York City, crystallizing a volatile meeting of styles. The initial ingredient was a number of Cuban formats:  guaracha, cha-cha, mambo, and guaguancó. These were transformed by musicians, mostly of Puerto Rican origin, who brought forth the luxurious sheen of American big band jazz, the gritty vibe of urban R&B and soul, and the subtle influence of boricua folk. The resulting sound spawned such salsa stars as El Gran Combo, Héctor Lavoe, Ray Barretto, La Sonora Ponceña, and Rubén Blades.

Of the bandleaders, Tito Puente was the grandest. He emerged in the mambo era of the fifties and continued recording copiously until his death in 2000. His Dance Mania (Sony International, 1958) showcases the rich buffet of tropical formats that would eventually morph into salsa. The modern salsa sound explodes with full force on Eddie Palmieri's 1964 masterpiece Azúcar Pa'Ti (Tico/Fania, 1964). It contains the nine-minute-long "Azúcar"—devastating in its intensity and swing. In former Sonora Matancera vocalist Celia Cruz, salsa found its most flamboyant star. A collaboration with Nuyorican producer Willie Colón, Only They Could Have Made This Album (Vaya/Fania, 1977) has an indelible quality to it—the diva's chocolaty voice surrounded by lush layers of trombones and Colón's savvy production instinct.

The comforting voices of Pedro Infante, Celia Cruz, and Beny Moré may not be with us anymore, but Latin music continues to thrive in the new millennium.

Granted, much of nuestra música has succumbed to the commercial parameters of record labels. At the same time, new artists emerge in all corners of Latin America. Many of them find inspiration in the glorious recordings of the past for the creation of a new aesthetic.

The development of digital recording technology and the genre known as electronica—artificial beats, lots of synthesizers—have resulted in fresh new sounds. In Brazil, for example, artists like Bossacucanova, Cibelle, Céu, and Rosalia de Souza reinvented the bossa nova with electronica beats. The daughter of bossa pioneer João Gilberto, Bebel Gilberto shines on the moody Tanto Tempo (Six Degrees, 2000). Leave all electronics aside, and the album feels like a recording from the sixties. The same treatment was bestowed on tango by such sound collectives as Gotan Project, Tanghetto, and Bajofondo Tango Club. Chock-full of melancholy melodies, Gotan's Lunático (XL Recordings, 2006), is every bit as authentic as an Astor Piazzolla original.

Cuban music continues to be an endless source of inspiration. In its debut album A lo cubano (Surco, 2000), the Paris-based Orishas combined typical Cuban patterns with rap; the end result is exhilarating. In Mexico, quirky artists like young chanteuse Natalia Lafourcade experiment with rock, folk, and confessional songwriting. Her Casa (Sony International, 2005) is playful and wry.

Even the world of Latin pop can surprise with an idealistic vision. In the case of Juanes, the Colombian troubadour has demonstrated that you can be commercially successful and create quality music with interesting lyrics, too. The seamlessly produced La vida... es un ratico (Universal, 2007) would appear to imply that, at least for now, the future of Latin music is in good hands.