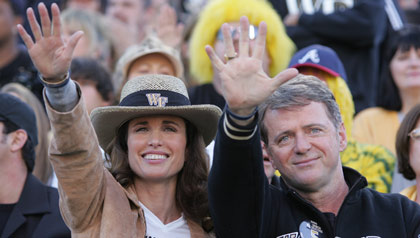 Andie MacDowell and Aidan Quinn as Maryanne and Steve Abbate in The 5th Quarter.

En español  |  The 5th Quarter doesn’t want you to think. It wants you to feel. Sure, there’s a story: the true tale of how the death of a teenager inspired Wake Forest University’s football team to play its best season ever. But at its big bleeding heart, the movie seeks simply to toggle viewers between bathetic tears and triumphant cheers — with little or no attempt at transitions in-between nor lessons to be learned. It’s like making an exhausting slog up a steep mountain, only to find the summit enveloped in clouds.

Writing about Greek drama, Aristotle called the concept “dramatic catharsis.” Writing about The 5th Quarter, I call it “shameless exploitation.” Admittedly, I didn’t much like The 5th Quarter — I prefer more subtle dramatic currents and ones that serve to address a meaningful subtext. Still, I suspect The 5th Quarter provides precisely the effect it aims for, and that there is a sizable audience looking for just such an emotional outlet.

Andie MacDowell and Aidan Quinn (as appealing a movie couple as you could imagine, by the way) play Maryanne and Steven Abbate. In a series of heartwarming vignettes we meet them and their happy family, all of them deliriously in love with each other. But the more they smile fondly in each other's direction, the more the parents coax their aw-shucks boys into giving them a kiss before they get out of the car, the more we know something truly awful is about to happen.

It does — the family’s middle son, Luke, is killed in a senseless car crash. Most filmmakers would do the expected here: a speeding car, a whirl of trees, and cut to the funeral. But director/writer Rick Bieber isn’t about to spare us the details in-between. There’s Dad getting the horrible phone call, his face melting from smile to incomprehension to dread. There’s the long drive to the accident site, then the frantic ride to the hospital, then the sad gathering of family around the comatose boy’s bed, each family member taking turns to sob and pray. Next comes the doctor telling them it’s time to turn off the ventilator, the family’s resistance and ultimate agreement; then a procession of friends and strangers who file through the hospital room to say their goodbyes. Then comes the woman from the organ-harvesting foundation, and the family has to agonize over that. Finally the family follows the gurney to the operating room, where Luke’s organs will be removed, for yet another set of goodbyes.

Did I say finally? Now comes the funeral, and we sit through what seems to be the whole sad ceremony, complete with a girl at the lectern who relates a long story about how Luke used to tease her. And the clergyman, who gives a stirring memorial extolling the virtues of a character we’ve never really met.

So about this time, a half-hour or so into the movie, I start thinking: “Wait a minute, isn’t this supposed to be about football?” And about 45 minutes in, we do finally see older brother Jon (Ryan Merriman) half-heartedly practicing with his Wake Forest teammates. He’s having trouble focusing, so a friend talks him into seeing a sports motivational expert, who, in a Rocky-inspired montage, helps whip him back into physical and emotional shape.

Somewhere along the line, and it’s not clear precisely when, the team gets the idea to dedicate their season to Luke — a kid who they, like us, barely knew. Miraculously, Wake Forest goes from divisional dog to darling, although even in the film’s narrative that success seems to have a lot more to do with the skillful leadership of its coach (Michael Harding) than the spirit of Luke, who is presumably smiling benevolently over the gridiron. There’s occasional lip service paid to Luke’s memory, but in the whirl of big games and against-the-odds heroics, the film seems to lose interest in him, and instead generates its emotional power from the Wake Forest miracle. The stand-up-and-cheer sentiment Bieber seeks never quite gelled for me, but I’m pretty sure there are those in some quarters of this country who will be fist-pumping as those final seconds tick down.

It seems as if The 5th Quarter is two parallel movies, each with its own brand of punch. Quinn, in particular, wrings every emotional molecule from his character: Steven’s hospital anguish is palpable; at the funeral, he’s heartbreaking as he waves off the pallbearers and, alone and sobbing uncontrollably, wheels his son’s coffin from the church. And by the end, when he tearfully presses his ear to the chest of the woman in whose body Luke’s heart is beating, well, you’d have to be heartless yourself to not feel a lump in your throat.

True to Aristotle’s view of cathartic drama, the characters in The 5th Quarter do nothing to deserve their travails, and at the end they are not expected to have learned anything. They endure. They also pray, and although from beginning to end it seems to be their faith that sustains them, that element of their experience seems to be muted — a strange choice for a film that is clearly aimed at America’s Heartland. Then again, when you put things into God’s hands, that can take some of the drama out of life, and drama of the most obvious and over-the-top kind is what The 5th Quarter is all about.