Editor's Note: This is the fourth of a series of interviews with veteran television stars who are featured in the PBS series Pioneers of Television. The series runs through Feb. 8.

Speak Out!
Are you a fan of Willard Scott and the Today Show? Join the TV Talk community and chat with fellow readers about Willard and his famous weather report. Do

Before he was a Today show weatherman, Willard Scott was Bozo the Clown. And it is that credential that gives him a part in the PBS series Pioneers of Television, airing its last episode Tuesday.

Scott, now 77, was in the forefront of TV programming for children back when baby boom viewers — a huge new audience of youngsters — came home from school and tuned in to local shows. Scott was one of about 50 Bozos in kids' shows around the country in the 1950s.

TV's contemporary landscape is populated by national sensations such as Hannah Montana on Disney and the Carmen Sandiego shows on PBS. But back in Scott's day, local kids were in the audience and on the show.

"When we filmed the pilot, they sent the wrong bus to the studio," Scott recalls of his first day as Bozo. "They sent the bus from the senior home. So, my first Bozo show wasn't for kids at all. It was for people who were my age now." The retirees loved the show, but it was kids who made Bozo a long-running success.

"What was special was that kids could come to the show, be on it and see themselves. That local connection was really important," Scott says.

But, as with all things television, "important" eventually meant getting high ratings. For example, in Los Angeles, so many people fell in love with another kids show, Beany and Cecil, Albert Einstein among them, that at one point 7 out of 10 viewers were tuning to the show's telecasts. And high ratings also meant that soon there would be commercials. 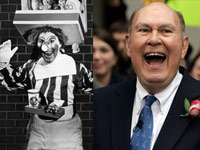 Willard Scott as Ronald McDonald (left) in the 1950s and today

Pioneers of Television chronicles the transition of children's shows from pure entertainment to mass marketing. Eventually, Congress intervened and hosts such as Scott were barred from devoting show time to promoting cereal and toys.

"I love commercials," Scott says when asked about his long association with on-air selling. "I saw one the other day with elephants dancing to Benny Goodman's Sing, Sing, Sing. I nearly fell out of my chair." (The ad is for GE).

He is proud also of having been the first Ronald McDonald, a kids' character created solely as a marketing entity. Though that was nearly a half-century ago, the pitchman remains devoted to his brand. "I go to McDonald's at least once a week. I always get a No. 2."

Scott is less concerned about the commercialization of young people's programming than about its coarsening. He says he has sampled the controversial MTV series Skins, which depicts sex and profanity among preteens. He says, "It is a long way from Skins to Miss Frances," of Miss Frances' Ding Dong School, which first aired on NBC in 1952. Deploring the drugs ingested on the MTV series, Scott recalls, "We had ice cream after the show."

This grandfather of texting teenagers is concerned that "nobody actually talks to anybody anymore. People in cubicles next to each other, they e-mail each other." So, any chance he has, Scott gets out and talks to people. This week, he was in Peoria, Ill., for Groundhog Day. "They have Gertie, who they are trying to compete with Punxsutawney Phil." If anyone can give Gertie a paw-up, it's Weatherman Willard.

Describing himself as semiretired, Scott still hosts his Today segments from a studio in Washington, D.C., or from Fort Myers, Fla., near his Sanibel Island cottage. As viewers know, age counts in earning his birthday well wishes. "When I started in 1983 occasionally you would get someone 101 or 102. Now, 100 hardly gets you on the show; it's more like 110."

From kiddie clown to centenarian celebrator, Scott says his career has been "one fluke after another." Still, he draws this connection between Bozo and the Today show.

Jack Curry, a former editor at USA Today and TV Guide, is a freelance writer and editor and serves on the editorial board of the U.S. Chamber of Commerce, specializing in corporate philanthropy and the media.