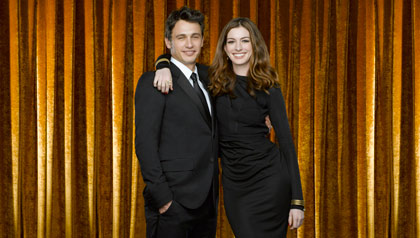 James Franco (left) and Anne Hathaway (right) will serve as co-hosts of the 83rd Academy Awards.

Political junkies have election night. Sports nuts have the Super Bowl. Sunday is Oscar Night, the best of both worlds for movie fans as it involves a secret ballot, victory speeches, tasteless production numbers and more.

Like everyone else, I have my preferences as to who will walk off with the statuette; unlike everyone else, my reasoning is unassailable. And, despite Oscar's focus on youth — the hosts are James Franco, 32, and Anne Hathaway, 28 — I think it could be a big night for grownups. Some thoughts:

Best Picture: The King's Speech ought to win, and it probably won't. The Academy most likely will go with The Social Network, and then all its members will get on Facebook to crow about how right they were, which makes the whole process kind of unfair, don't you think? Next year's winner — Twitter: The Movie.

Best Actor: If Colin Firth doesn't win for his breathtaking performance in The King's Speech, I hereby vow I'll never watch the Oscars again until next year.

Best Actress: It's true that The Kids Are All Right does not represent the greatest performance of Annette Bening's career (that would be American Beauty). But after four nominations, she deserves to get recognized this year. I know everyone's buzzing about Natalie Portman, but mark my words: 10 years from now people are gonna look back at all the praise being heaped on Black Swan and say, "What were we, drunk?"

Best Supporting Actor: Geoffrey Rush (The King's Speech) is a gentleman. Christian Bale (The Fighter) is a punk. That ought to be worth something.

Best Supporting Actress: The rightful winner, Lesley Manville (Another Year), wasn't even nominated, so I really don't care who wins this.

Best Animated Feature Film: Of course the Pixar juggernaut will prevail with yet another Oscar for Toy Story 3 — but I'm telling you, Sylvain Chomet's hand-drawn Illusionist is the most stunningly visual, exquisitely human, animated film of the past decade. A win for this French-made masterpiece would be the most welcome wrong guess of the year for me.

Disagree? Well, feel free to let me know how wrong you are.