For his first movie, writer/director Richard Levine followed that timeworn piece of storytelling advice: Write what you know. Every Day tells the story of Ned and Jeannie, a New York City couple (Liev Schreiber and Helen Hunt) whose daily routines are disrupted when Jeannie’s dyspeptic father Ernie (Brian Dennehy) moves in with their family after a fall. There’s also drama at Ned’s job — he’s a writer on a raunchy cable show called Mercy Medical  — and the revelation that their teenage son is gay to contend with. 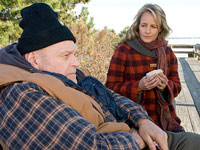 Brian Dennehy and Helen Hunt play an estranged father and daughter in Every Day.

We chatted with the 56-year-old Levine, a former executive producer of Nip/Tuck and a veteran of several TV dramas and comedies, about his new movie. Every Day opened in limited release on January 14 and is also available on-demand through many cable companies (check your local listings).

Q: Having the main character as a TV writer seems like a tip-off that the movie is autobiographical. Is it?

A: It reflected certain elements in my own life that were happening to me. I thought it was a complicated and interesting time, and I felt like I wasn’t alone, raising young children and dealing with sick parents. My son was 14 when he came out. It was a shock to me and highlighted the unpredictable process of parenting. I remember being surprised and having no rulebook to fall back on. And at the same time, my wife’s father was ill and we were in the process of bringing him to Los Angeles for the end of his life. I like to think of it this way: The seeds of the movie are true but the actual scenes are not.

Q: Having an older, sick parent to care for can be difficult — both for those who are in need of care and those providing it. It certainly is for Jeannie and Ernie.

A: I loved my father-in-law. He was an interesting, smart, soulful guy. But he was also tormented by regret and held onto a certain bitterness. He was of a generation that to some extent put their dreams on hold. And I think Ernie reflects that generation. And in the movie, when [Jeannie] makes an effort at connection, it’s like doors are being slammed in her face. And that relationship and the responsibilities that go with it have ripple effects that can create a really bumpy journey for an entire family.

<p>&quot;[T]he over-49 crowd is still tremendously undervalued just in terms of a demographic that supports entertainment. But I think that will change — it has to change&quot; —<i> Richard Levine</i><br> </p>

Q: Given his stature — both physically and from his acting career — it’s shocking to see Brian Dennehy confined to a wheelchair. You could feel Ernie’s frustration at where he has ended up.

A: That was really important because I didn’t want him to be in any way villainous. You want to feel for him and you want to understand the experience that’s behind the cantankerousness. But you also wanted to convey a forcefulness so that you could understand what Jeannie had been up against throughout her life with this man. What was nice is that it turned out Brian had known Helen through Hollywood circles since she was a little girl, which made their scenes together really special for them. I got very lucky with the two of them.

Q: Your movie deals with some grown-up, Sandwich Generation themes that aren’t really touched on by many films that come out of the Hollywood machine.

A: I think maybe that’s in the process of changing. Right now, the over-49 crowd is still tremendously undervalued just in terms of a demographic that supports entertainment. But I think that will change — it has to change — especially as people are living longer, and really living vibrant lives into their 80s and 90s. If you’re still lucky enough to have your health and to have financial comfort as you get older, there's a lot of freedom. And so I think that they will be seen as more important, and hopefully you’ll see more stories like this.