More than a quarter of the Academy Award nominees whose names were announced this morning in the acting categories are film veterans older than 50. And it’s quite possible that, come Oscar night, all four acting statues will go home with one of them.

Jeff Bridges, 61, and Colin Firth, 53, are front-runners in the best actor category for the second consecutive year. Bridges, nominated for True Grit, won last March for Crazy Heart, so odds are that Firth will be giving his own acceptance speech this year for his standout performance in The King’s Speech. 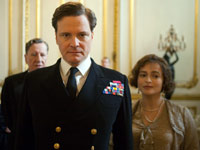 Annette Bening, 52, is nominated as best actress for her role in The Kids Are All Right, for which she won a Golden Globe earlier this month. Her toughest competition may be Natalie Portman, 29, nominated for Black Swan. Portman also won a Golden Globe for best actress because the Golden Globes have two categories for movies — comedy/musical and drama. But this is Bening’s fourth Oscar nomination, and the fact that she has not yet won could give her an edge.

Melissa Leo, 50, who plays the mother of Christian Bale, 36, and Mark Wahlberg, 39, in The Fighter, was nominated in the supporting actress category. Leo also won a Golden Globe for the role. Her toughest competition in the category could be Australian actress Jacki Weaver, 63, who was nominated for Animal Kingdom.

Geoffrey Rush, 59, is nominated as supporting actor for The King’s Speech, and John Hawkes, 51, for Winter’s Bone. This category is full of competition — including Bale, Jeremy Renner, 40, and Mark Ruffalo, 43 — but Rush, who won an Oscar for best actor (Shine) in 1999, is a favorite.

The Academy Awards air Feb. 27 on ABC at 8 p.m. ET. AARP The Magazine’s Movies For Grownups Awards gala — where film icon Robert Redford will be presented a lifetime achievement award — is Feb. 7 in Beverly Hills, Calif.