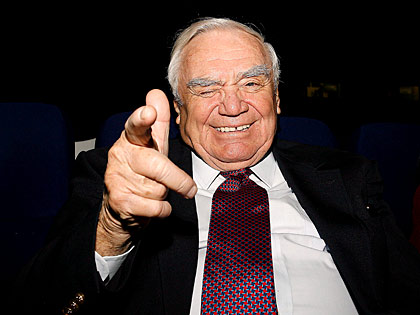 Besides McHale's Navy, Ernest Borgnine, 94, has made more than 200 movies. He also won an Oscar for the 1955 film Marty.

Ernest Borgnine, the 94-year-old actor most of us remember from the 1960s sitcom McHale's Navy, received the Screen Actors Guild Life Achievement Award Sunday night from his second-in-command on the popular show, Tim Conway.

While Borgnine played Quinton McHale for just four years (1962 to1966), he made more than 200 movies — including last year's Red — and won an Oscar in 1956 for the 1955 film Marty. With wit and warmth, he reminisced about that big night, other aspects of his career and joining James Earl Jones, Betty White, James Garner and other distinguished colleagues as a SAG Life Achievement honoree.

Q: The year that you won an Academy Award for best actor, your competition was Frank Sinatra, Spencer Tracy, James Cagney and James Dean. Talk about that night.

A: I was sitting in my seat, watching, and the time came when they were going to call out the best actor. I was looking over at Jimmy Cagney and all the rest of them and thinking, "These guys are really good," and then my wife is pounding on me saying, "They called your name!" I couldn't believe it. I had nothing planned; I just walked up those steps.

Q: But you did have a little something planned, right?

A: In the morning we had [rehearsal] and Jerry Lewis, who was master of ceremonies that year, made me a bet. He said, "I bet you a buck-98 you're going to win." Grace Kelly said the same thing. When I got home, I took a red sack of my little daughter's and I put 198 pennies in it, just in case. I had it in my pocket, and as I walked up the steps I handed it to Jerry and I said, "Here, you won." Grace Kelly handed me the statue. A few years later, I met up with her and her husband in Monaco and she said, "Ernie, do you still have that little trinket I gave you?"

Q: Have you thought about what you'll say when you receive the Life Achievement award?

A: I have. I want to say something to the people who belong to the Screen Actors Guild, that we carry on; that the work that was done for us years and years ago — that's what it's all about. We carry it on.

Q: For many people, you are remembered not for an Oscar or your films but for your TV series, McHale's Navy. Is that OK with you?

A: Absolutely. I think it's wonderful. A lot of people come up to me and say "I was just a child when I was watching you in McHale's Navy."

Q: Another of your life achievements is your long marriage to your fifth wife, Tova. What's the secret to this one?

A: We call each other all the time. We talk to each other. The whole premise of a good marriage is people talking to each other. There are times between husbands and wives that get a little feisty. That's life. But if you come to reasonable sense and just say I'm sorry for what I did. … Like I forgot to send flowers to my wife on her birthday. The next morning, I sent beautiful orchids and I wrote, "Mea Culpa." We respect each other and we talk to each other. It looks like we're going to be going for the rest of our lives.