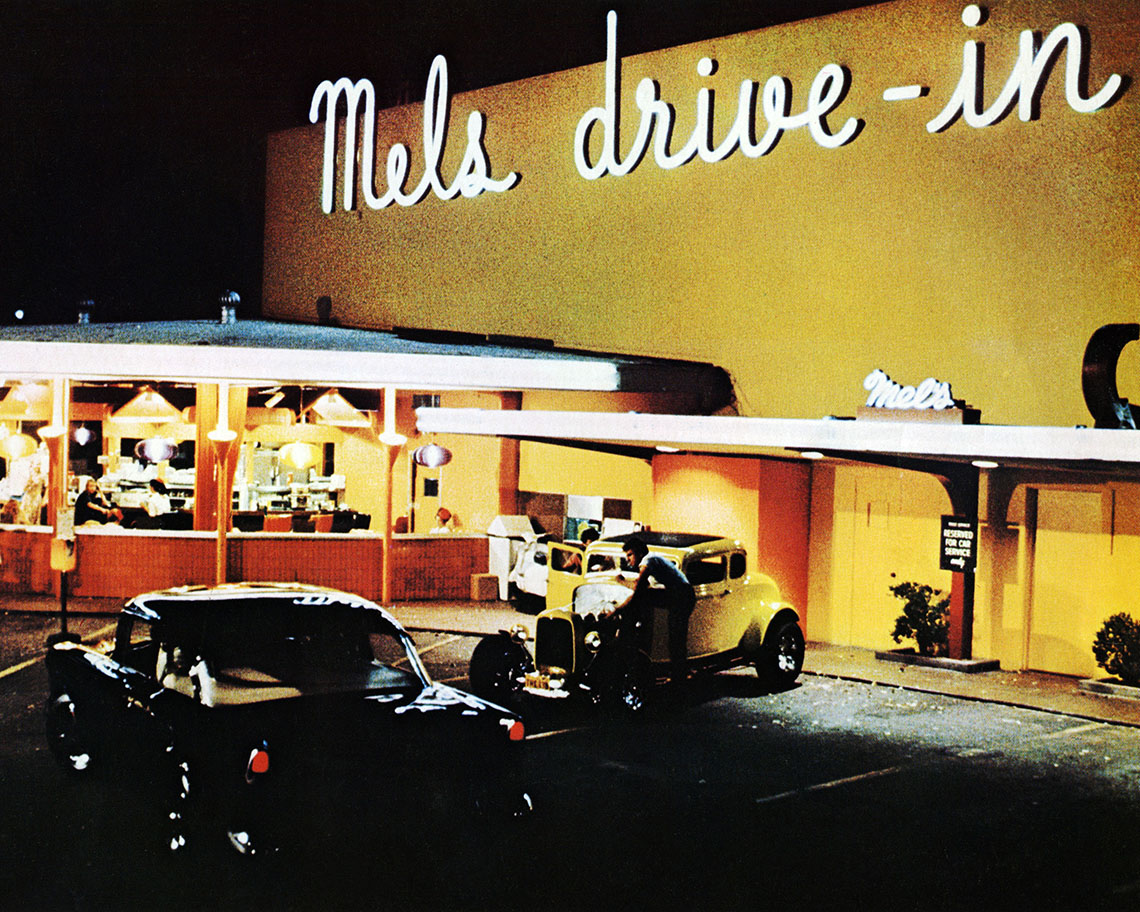 A nighttime scene outside Mel's Drive-In in San Francisco, California, from the film "American Graffiti."

En español | Ah, the drive-in. The joy of finding just the right parking spot, hooking a tinny speaker into your window… and then splattering nachos and orange soda all over your soft Corinthian leather upholstery.

Drive-ins, actually, were already back on America's 21st-century radar as the nostalgic alternative to the theater multiplex, and this year's COVID-19 cautions have put them right at the forefront of socially distanced moviegoing.

But with only about 300 drive-ins currently operating in the whole country, it might be easier to pop up a drive-in vibe right in the comfort of your own home. And for that, all you really need is the right movie — something summery and light, or goofy and gory, with more than a pinch of sweet nostalgia — and a bucket of buttered popcorn to spill all over the sofa.

Check out these 16 critic-picked films that bring the drive-in to you.

The best drive-in movies are thrill rides, and they don't get more thrilling than Steven Spielberg's classic fish tale. Last summer, a drive-in in Texas figured out how to make the film even more gripping by holding screenings in a lake with the audience floating in inner tubes. This summer, Bruce — as Spielberg (now 73) nicknamed his mechanical great white shark — is back in land-based drive-ins, which have been screening mostly vintage features as they wait for the studios to start releasing new pictures again. But it plays just as well at home, with or without inner tubes.

RELATED: Which Jaws cast member was shot at the day he arrived on Martha's Vineyard to film? Who kept having nightmares for weeks after the movie wrapped — and why? Get the answers to these and 18 more trivia ticklers for Jaws aficionados, right here: 20 Things You Didn't Know About Jaws

Olivia Newton-John sings! John Travolta dances! This bubbly musical rom-com set in the late 1950s — greaser Danny and good girl Sandy fall in love, break up, reconcile, then inexplicably fly off together in a convertible at the end — is such a drive-in classic that it actually includes a scene set in a drive-in. (Sadly, the location for that sequence — Pickwick Drive-In in Burbank, California — was demolished in 1989, replaced by a strip mall.) Travolta, now 66, had a smaller part in the earlier Broadway production and almost didn't make it into the film version; the producers wanted Henry Winkler for Danny, but the Fonz turned them down.

Slasher movies and drive-ins go together like chainsaws and Texas. After all, who better to encourage dates to scoot closer together than a disfigured maniac slicing and dicing teenagers? This particular B movie, directed by Wes Craven, stars Robert Englund, now 73, as the demented Freddy Krueger, and Heather Langenkamp, now 56, as his victim-who-gets-away, Nancy Thompson. It also happens to include a then-21-year-old Johnny Depp in his first film appearance, as Nancy's boyfriend, Glen Lantz. Depp, now 57, gets sucked into a bed as his blood splatters to the ceiling.

Another terrific drive-in flick that happens to have a drive-in in it: At one point in the film, a tornado blows up an Oklahoma theater in the middle of a screening of The Shining, sending Bill Paxton and Helen Hunt (now 57) scurrying for cover. In 1996, in an incident that all but proves God is a movie fan, an actual tornado landed on a drive-in in Canada. The movie playing in that theater? That's right: Twister. Luckily, there was far less damage than in director Jan de Bont's version, and nobody was injured.

Harold Ramis reunited SNL alums Chevy Chase, now 76, and Bill Murray, now 69 — who in real life hated each other's guts — in this sweetly raunchy golf-caddy comedy that also stars Ted Knight (who hated both Chase and Murray) and Rodney Dangerfield (who knew so little about filmmaking that Ramis had to explain what it meant when he yelled “Action!"). And even though the last-minute inclusion of a dancing gopher was one of many artistic decisions that frustrated writer-producer Douglas Kenney (who was on his own tragic decline with substance abuse and depression, and died during a postproduction trip to Hawaii), the resulting picture remains one of the most enduring cultural touchstones of the ‘80s.

George Lucas’ tone poem to the early 1960s — with Richard Dreyfuss, now 72, Ron Howard, now 66, and Charles Martin Smith, now 66, playing high school graduates goofing off for the summer before starting college (or shipping off to Vietnam) — is so bursting with Kennedy-era exuberance that even millennials might get choked up. “A load of wonderful characters who whirl around in ducktail haircuts and shirtwaist dresses,” is how the Hollywood Reporter described it in its rave review, predicting that it “may well prove to be a watershed film of major importance.” Much of the film was shot in the original Mel's Drive-in restaurant in San Francisco, which is still in business today. (Indeed, there are now Mel's up and down the California coastline.) Grill up some burgers for this showing at home.

Eddie Murphy's first film role — in producer Joel Silver's first movie — nearly went to Gregory Hines (who dropped out to do The Cotton Club). In fact, Richard Pryor, Howard E. Rollins Jr. and a young unknown named Denzel Washington (pre-St. Elsewhere) were all considered before 21-year-old Murphy, now 59, finally landed the part of a convict who joins forces with Nick Nolte's cop to hunt down a pair of killers. Film historians can debate whether or not it's the first “buddy cop” movie (1974's Freebie and the Bean also has a claim), but either way it's great drive-in fare.

In the first cut of Pixar's anthropomorphic CGI-animated road comedy, there was a sequence in which Lightning McQueen (voiced by Owen Wilson, now 51) takes Sally Carrera (Bonnie Hunt, now 58) to the Radiator Springs drive-in theater for a date. Talk about meta! Alas, that scene got cut, with just a piece of it ending up in Cars’ closing credits. Still, talking automobiles are a natural for drive-ins — and so far, nobody's made a big-screen version of Knight Rider.

Science fiction generally doesn't fare well at drive-ins — the genre usually does better in dark, enclosed spaces — but Woody Allen's futuristic farce is an exception. Allen plays a 20th-century health food store owner who gets cryogenically frozen for 200 years after a botched ulcer operation and defrosted “like a TV dinner” in 2173. As preposterous as the plot sounds, it's actually grounded in some science: Allen, now 84, met with real-life scientist and sci-fi writer Isaac Asimov for lunch while writing the script to make sure his predictions for the future (which included an orb-like object called the Orgasmatron) weren't too fanciful.

Alfred Hitchcock's seminal slasher thriller was actually an experiment to explore cheaper, TV-style filmmaking techniques (he hired mostly television pros for the crew). But this scaled-down, black-and-white production — starring Anthony Perkins as the ultimate momma's boy, Norman Bates, and Janet Leigh as his not-so-squeaky-clean victim — went on to become one of Hitch's biggest hits. Film history bonus: It also happens to be the first Hollywood movie ever to show a toilet.

RELATED: Not only is Psycho a masterpiece for the drive-in, it's also one of our critics’ picks for the all-time best movies of the entire decade. See which other films made our list, right here: Stream the Best Movies of the 1960s

Not everyone fell in love with this East-meets-West buddy comedy starring Chris Tucker, now 48, as an LAPD cop who's investigating a kidnapping and forced to babysit a visiting Chinese detective played by Jackie Chan, now 62. “I still don't like the movie,” Chan told the Los Angeles Times in 2002. “I don't like the way I speak English, and I don't know what Chris Tucker is saying.” Still, the film, directed by Brett Ratner, was a box office smash, grossing $244 million worldwide (off a budget of just $33 million), and it spawned two sequels, with Chan appearing in both.

Somewhere in a Hollywood vault, there's footage of Eric Stoltz playing Marty McFly. Thankfully, director Robert Zemeckis and producer Bob Gale took a mulligan five weeks into the production and recast Michael J. Fox, now 59, as the ‘80s teenager who accidentally drives a time-traveling DeLorean back into the 1950s. One of the decade's biggest hits, its fans included President Ronald Reagan, who quoted one of Christopher Lloyd's lines in his 1986 State of the Union address: “Where we're going, we don't need roads.” What Reagan's speechwriters neglected to note is that in the film, Doc Brown himself expresses pure incredulity that an actor could become president: “Then who's vice president? Jerry Lewis?” A classic for any screen — and era.

Twenty-seven years after its original release, Steven Spielberg's dinosaur epic was once again number 1 at the box office this summer, thanks in part to new-release-starved drive-in theaters. The picture earned a (sort of) whopping $517,000 during just one weekend in June (adding to its lifetime gross of $1.03 billion). Obviously, those sneezing brontosauruses and scheming velociraptors are best experienced on a big screen — as are stars Jeff Goldblum, now 67; Laura Dern, now 53; Sam Neill, now 72; and, in a small role, Samuel L. Jackson, now 71 — but a 50-inch 4K flat screen will do in a pinch.

Fans have been waiting 34 years for a sequel to John Hughes’ 1980s idyll about a super-confident high school senior who's got the world (or at least Chicago) on a string. At one point there was talk of a Ferris Bueller-in-college movie, then a Ferris-as-a-grownup film, but star Matthew Broderick, now 58, nixed all suggestions, arguing that the original didn't need updating. He was right, of course. All these decades later, Ferris holds up spectacularly well: “The most life-affirming movie possibly of the entire postwar period,” is how cast member Ben Stein described it (he all but stole the movie playing the boring economics professor). “This is to comedies what Gone With the Wind is to epics."

Writer-director Sam Raimi's campy, low-budget horror film — it cost a mere $350,000 — spawned a cult media empire, with four sequels, a TV series and a slew of video games (not to mention four decades’ worth of cabin-in-the-woods knockoffs). The original film isn't for everyone — series star Bruce Campbell, now 62, the so-called “Laurence Olivier of bad movies,” spills enough plasma battling the menacing supernatural entity that's lurking in the fog to fill an Olympic-sized pool. (Characters are stabbed, bludgeoned, assaulted by evil trees, hacked to bits and burned.) Still, by today's standards, the fake blood looks more comical than disturbing, and hats off to Raimi for trying so hard to make the goriest drive-in movie ever.