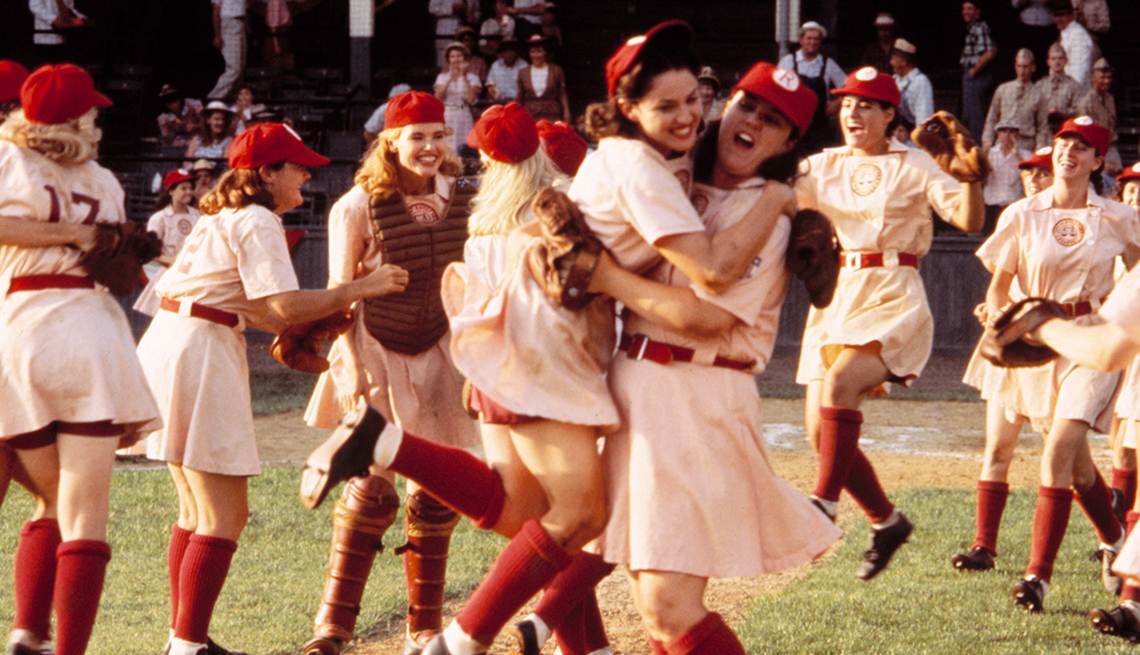 Geena Davis, Madonna and Rosie O'Donnell star in "A League of Their Own."

En español | We miss sports. We're guessing you do, too. But fear not, we've got you covered. There may be no baseball spring training, pro basketball, hockey, tennis, golf or the ritual of college basketball's March Madness — but there are many terrific sports movies and documentaries available on streaming services to get us through the drought. Here are 14 gems to get you cheering.

Tom Hanks is hard-drinking Jimmy Dugan, manager of the all-female baseball team the Rockford Peaches (Madonna, Rosie O'Donnell and brilliant Geena Davis) — who prove one can cry and still hit it out of the park. Inspired by the actual All-American Girls Professional Baseball League, started in 1943 when male players were off at war, it's written by the authors of Parenthood and Splash and directed by Penny Marshall (Big), with all the smart comic spirit of their previous smash hits. It's a lighthearted romp with affecting moments, some great catches and one of Hanks’ most famous lines: “There's no crying in baseball."

Gene Hackman plays a basketball coach who gets the last chance of his endangered career, trying to take a small-town high school team to the Indiana state championship. The newcomer coach angers the locals, and shocks them by hiring the town drunk (Dennis Hopper) as his assistant. Of course, the drunk knows basketball, and the team — based on the 1954 Indiana team that played one of the most miraculous games in sports history — knows basketball. Except for Rocky, there are practically no sports movies as inspiring as this one.

Emma Stone never had a better role than tennis champ Billie Jean King, who challenged self-proclaimed male chauvinist, former champion and gambling addict Bobby Riggs (Steve Carell) in a much-hyped, televised 1973 match watched by 90 million people. King struggles with a closeted gay love affair, and Riggs with aging, his gambling problem and his rich wife (Elisabeth Shue). Made by the creators of Little Miss Sunshine, this one's a ray of warmth for tennis fans.

Kevin Costner took a break from blockbuster hero roles to play an irresistible antihero, Roy “Tin Cup” McAvoy, a brilliant golfer who won't play the careerist game, always going for the risky shot, not the sure thing. His old frenemy (a perfectly cast Don Johnson) made it as a pro, so wouldn't it be sweet if Roy could shake off his lazy ways, steal his rival's psychiatrist girlfriend (incomparable Rene Russo in one of her finest roles) and make it to the U.S. Open? Golf has a loping pace that this sharp, heartwarming comedy really gets. Cheech Marin steals a lot of scenes as Roy's caddy and golf philosopher.

What better way to commemorate the 40th anniversary of The Miracle on Ice than with this rousing box-office sleeper starring Kurt Russell as Herb Brooks, head coach of the U.S.A. men's hockey team? Russell's wig and closetful of loud plaid sports coats are a draw in themselves. But the real attraction is watching him whip a ragtag band of scrappy, blue-collar college players into the crack squad that would finally topple the Soviet Union's decades-long reign at the Olympic Games. Inspiring stuff. 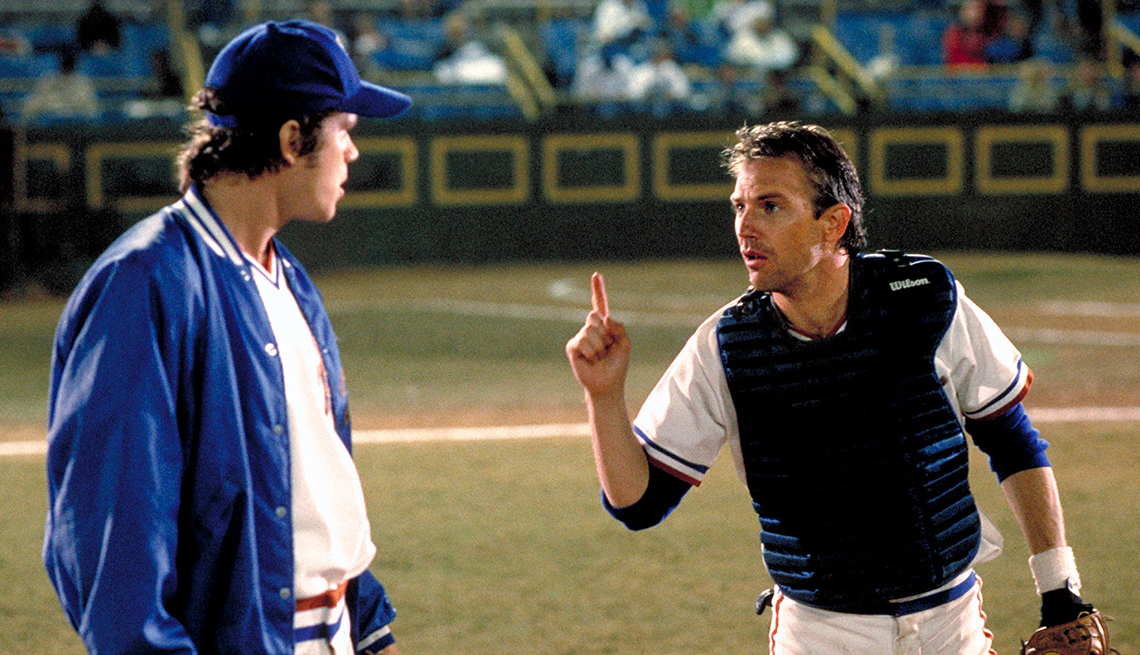 In a movie that's an elegant, eloquent love letter to baseball, Annie (Susan Sarandon) supports her beloved team by having an affair with a player each season. Should it be Crash Davis (Kevin Costner), a down-on-his-luck one-time major league player now forced to play in the low minor leagues? Or should she become the lover and life coach of the talented, untrained rookie pitcher, Nuke LaLoosh (Tim Robbins)? How about both? Funny and original, with a backspin of lovely melancholy, this may be the great American movie about the great American game.

They were diametric opposites on the tennis court: Bjorn Borg, the cool, precise baseline automaton and John McEnroe, the brash, serve-and-volley hothead. Fire and ice. In Janus Metz's underseen snapshot of their brilliant rivalry, a perfectly cast Shia LaBeouf steals the show as the “super-brat” McEnroe, showing us what made this champion tick against the backdrop of the two players’ epic match in the finals at Wimbledon in 1980.

Written by Ron Shelton, who played in baseball's minor leagues and wrote Bull Durham and Tin Cup, Blue Chips shows us the darker side of college basketball recruiting — without ever letting up on the gas when it comes to on-court action. It's part morality tale, part ESPN highlight reel, with Nick Nolte as a grizzled NCAA coach in the mold of Bobby Knight, who bends the rules to save his job. Shaquille O'Neal, Larry Bird, and Penny Hardaway all chip in to give it some authenticity. 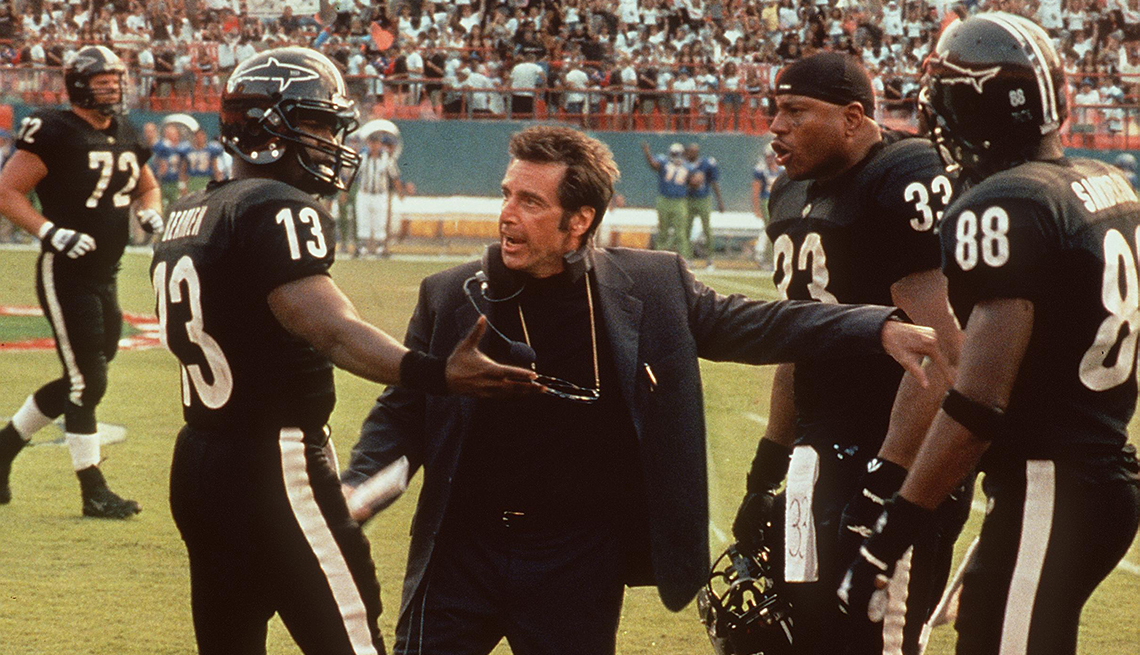 We could argue for days about why there aren't nearly as many great football movies as baseball movies, but this Oliver Stone pigskin flick is wild, and wildly entertaining. Al Pacino hams it up mightily as the old-school head coach of the fictional Miami Sharks, struggling to adapt to the new-school corporatization of the sport he loves. Jamie Foxx, Cameron Diaz, James Woods, Dennis Quaid, Charlton Heston, Ann-Margret, and about a million other A-list stars round out the cast.

They first met at the 1979 NCAA Championships. Larry Bird was the “hick from French Lick” playing for Indiana State; Earvin “Magic” Johnson seemed to possess an effortless grace on the court playing for Michigan State. The next year they would enter the NBA, redefine the sport and spark an East Coast-West Coast rivalry between the Boston Celtics and Los Angeles Lakers for the next decade plus. Narrated by Liev Schreiber and featuring interviews with both of the legends, this is a giddy, glorious snapshot of the moment when the NBA came of age.

Where to watch: HBO On Demand, Vudu 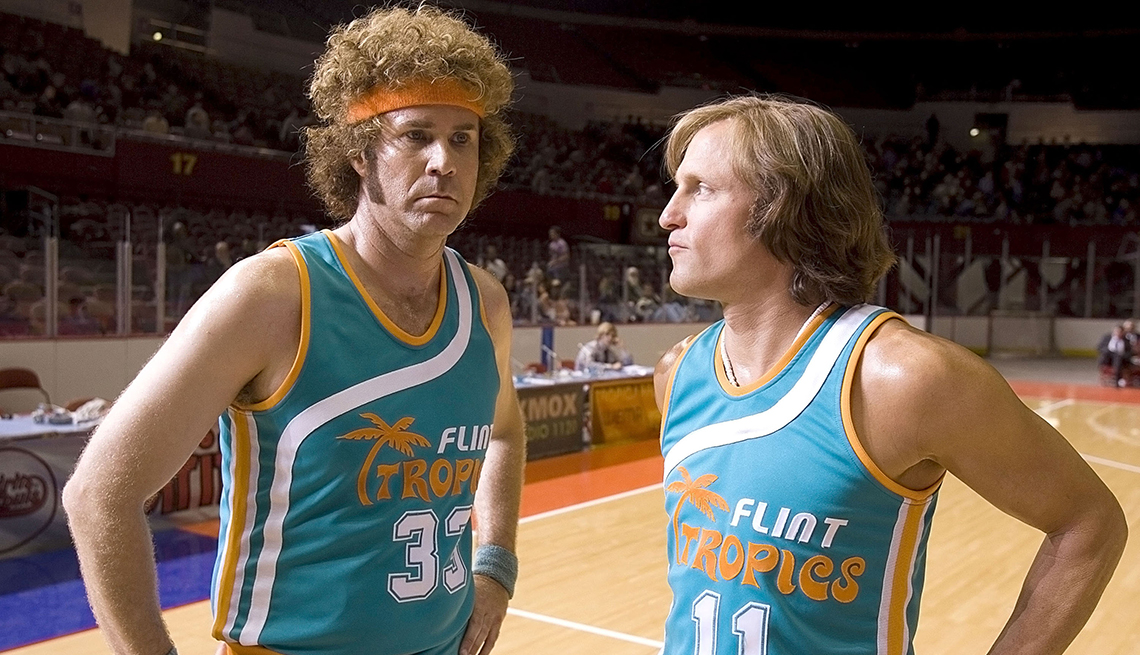 This Will Ferrell comedy may not quite soar to the same lofty heights as Anchorman, but it has some inspired moments of hilarity. Ferrell stars as Jackie Moon, the player/owner of the woeful ‘70s ABA franchise the Flint Tropics. The Me Decade jokes come fast and furious and the shorts couldn't be any shorter or snugger. If you don't mind a few comic air balls, this one sinks more gags than it misses.

If you've seen this adaptation of Bernard Malamud's literary masterpiece inspired by a mad fan's 1949 shooting of Phillies player Eddie Waitkus, it's even better the second time around. And if you haven't, what are you waiting for? Robert Redford is at the peak of his blonde, matinee-idol prime as Roy Hobbs, a baseball phenom whose career is cut short by a shooter (Barbara Hershey) and a femme fatale (Kim Basinger). But he loves the game too much to give it up, and returns for one last shot at glory. This is a magical movie in every sense of the word. Glenn Close, Robert Duvall and Wilford Brimley seal the deal.

The Battered Bastards of Baseball (2014)

Imagine Bull Durham, but real. Then you'd have something like the Portland Mavericks, a motley gang of renegade baseball players formed by ex-TV Western star Bing Russell, who shocked the minor leagues in the mid-'70s. Bing built it and the crowds came. Bing's son, Kurt Russell, played for the team and lends this wacky documentary some of his grinning mischief. It's a look at a brief window of time when a band of outsiders became insiders … before it all went up in smoke.

Where to watch: Netflix

Without question the greatest sports documentary ever made. Steve James follows two inner-city Chicago basketball phenoms for their entire high school career. The obstacles they face are devastating, but their dreams are boundless. This is as personal as filmmaking gets, and at times you want to look away, but can't. You're already in too deep — too invested in these kids’ lives. This is a movie about beating the odds, and what happens when the odds beat you. A masterpiece.