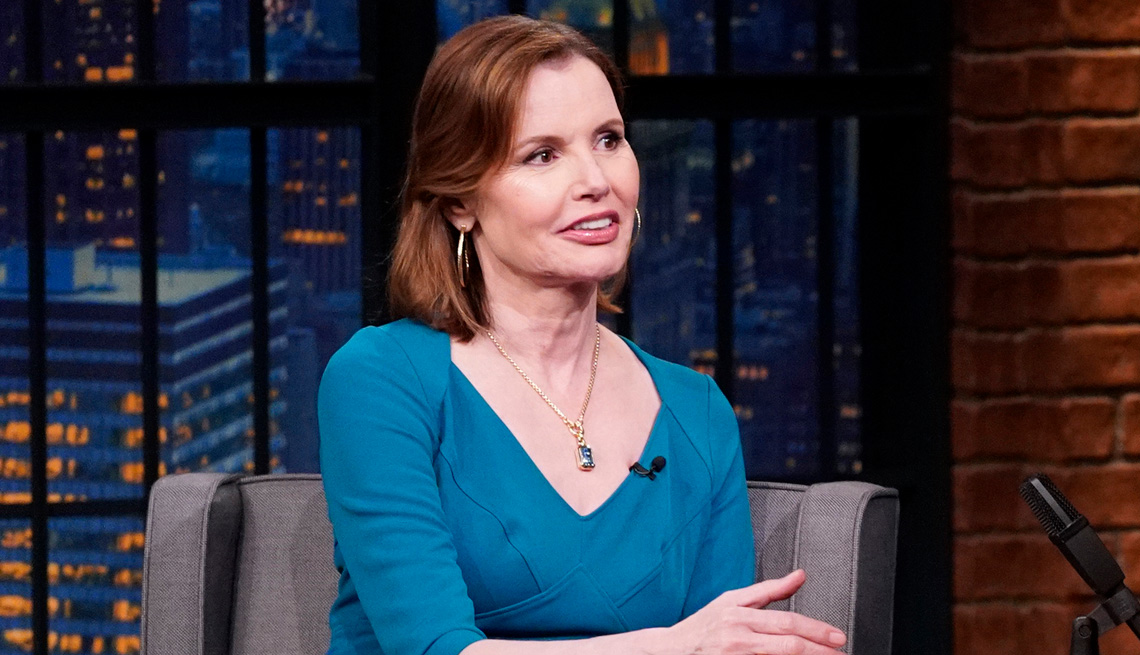 Geena Davis has two big news flashes. She's costarring in her first female-dominated drama since 1992's A League of Their Own: Netflix's excellent 1980s lady-wrestler show GLOW (third season premiere Aug. 9). And her documentary This Changes Everything also opens Aug. 9. She tells AARP about her fight to change Hollywood and her presidential plans — on- and off-screen.

Why did you produce the documentary This Changes Everything, about Hollywood's underrepresentation (and misrepresentation) of women, featuring Meryl Streep, Natalie Portman, Judd Apatow, Reese Witherspoon, Sandra Oh and Cate Blanchett?

It's a very powerful look at what's going on, very eye-opening to men and women when they see it all laid out. It's pretty astounding, the level of gender discrimination that goes on in the entertainment industry.

Your Geena Davis Institute on Gender in Media says that the ratio of male to female characters in film has remained 3 to 1 since 1946. But aren't things getting better?

See, everybody thinks that — that's part of the problem. The press was predicting “Thelma & Louise is going to change everything — now we're going to see so many movies starring women. Female road pictures, female buddy pictures.” I was very excited. Then it was The Hunger Games: “Now everything is going to change.” Then it was Wonder Woman. Female directors are still around 4 percent, with equally poor numbers for editors, cinematographers, writers and producers.

"The people who make kids’ entertainment love kids, and they're horrified that they're shortchanging girls... Why teach kids to have unconscious gender bias?"

But how do you help change things?

I focus on what kids see first: gender portrayal in TV and movies for kids 11 and under. The people who make kids’ entertainment love kids, and they're horrified that they're shortchanging girls. We've seen some definite progress. Why teach kids to have unconscious gender bias?

Your statistics show that The X-Files had an impact through “the Scully effect."

Isn't that amazing? Sixty-three percent of women working in STEM (science, technology, engineering and mathematics) cite The X-Files’ FBI medical expert Dana Scully as their inspiration. It's incredible what power that images have.

Has the Time's Up/#MeToo movement had an impact?

It's suddenly OK to talk about all of this. For so long, we've all kept silent. Now it is no longer OK for a young actress to be sent to a meeting with a director or producer in a hotel room — alone.

What made you decide to devote your life to women in entertainment?

Thelma & Louise. It made me realize how few opportunities we give women to feel empowered by female characters. So I decided, “I'm going to make my acting choices differently now.” Then it was when my daughter was a toddler, and I suddenly realized how shockingly male-dominated kids’ entertainment was. We're showing them that boys do everything, all the important stuff. This has to stop!

She's a former Vegas showgirl who's made a whole new career for herself in management, in charge of entertainment at a hotel. Even on the show, she's a great role model for the girls on the wrestling team because she shows there's life after whatever you're doing. You can reinvent yourself and find positions of more control and power in your life.

You've said you'd like to play a Marvel superhero. What's your superpower?

I kind of tend to take things too far. It's a trait of mine. I commit a thousand percent to something and see it through. That's my superpower. I'd like to be like Captain Marvel — that strong. That would be really fun.

You got 12 big movie roles (plus an Oscar) in your 30s and just two in your 40s. Are things improving for grownup women?

No, that's a myth in film. There are definitely more opportunities on TV, both in front of and behind the camera.

Oh yeah, I am. I love TV. I don't enjoy having my ass canceled. I was so bummed when ABC's Commander in Chief went off the air. As President Allen, I had a very short administration [2005-2006].

How can Hollywood be changed fast?

Just find the roles that could be either men or women and say, “So which ones can we switch?” Sigourney Weaver's character in Alien was supposed to be a man. Look how great that worked.

The bill to give women the right to vote was passed 100 years ago this summer. What's our next struggle?

The president I played on Commander in Chief got the ERA Amendment to pass, in an alternate universe. The goal in a true democracy would be for our representatives to reflect the population, and we're far from 50 percent. The U.S. ranks 104th in the world as far as female representation.

Will you run for president for real?

People have encouraged me. And I figure since I played one on TV, I know exactly what to do. I haven't ruled it out, actually. It's something that just hovers in the back of my mind.