Everything about Apollo 11, the remarkable new documentary about the first moon mission, is enormous, from the historic moment it chronicles to the emotional impact it leaves on its viewers.

That’s because director Todd Douglas Miller (Dinosaur 13) built his documentary, which arrives just in time to mark this summer’s 50th anniversary of the first moon landing, around newly unearthed large-screen, 65 mm footage that captured all aspects of the mission and then was forgotten. “Never-before-seen footage” sounds like a catchphrase that’s destined to disappoint. Not here. The new footage, restored and reformatted in high resolution, provides a more intimate look into the mission than anything we’ve ever seen, from the lead-up to launch, to the eight long days in Mission Control, to the astronauts’ dramatic reentry and recovery. How authentic is the experience? Among the movie’s credited cinematographers are astronauts Neil Armstrong, Buzz Aldrin and Michael Collins. 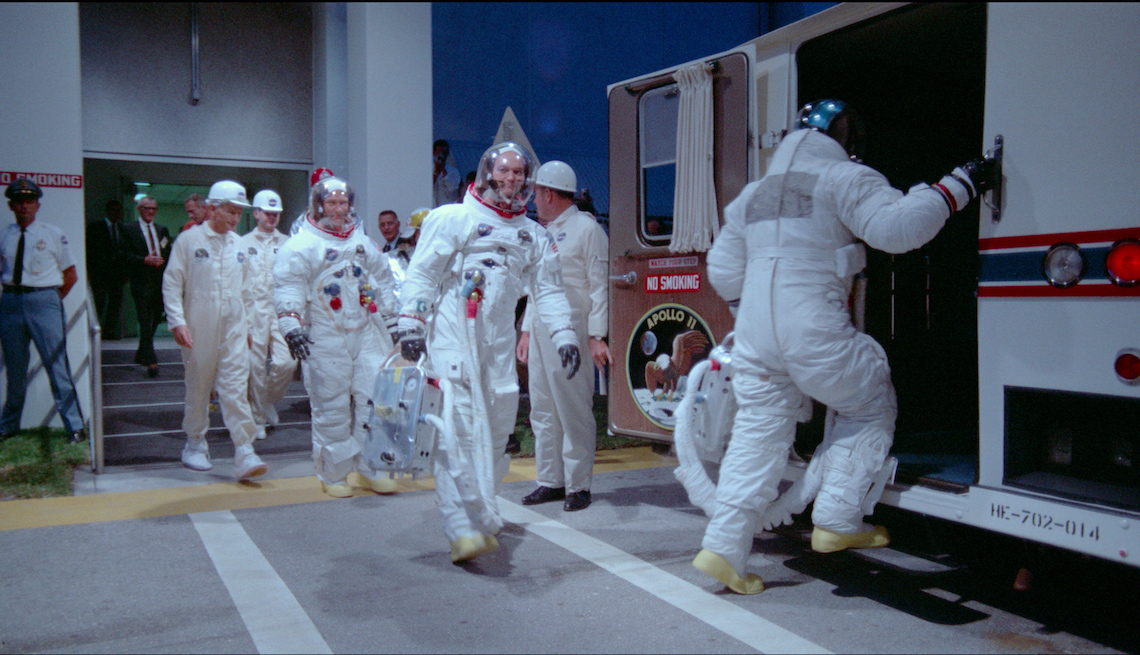 In the smartphone/Netflix era, it’s the increasingly rare moviegoing experience that rewards a big screen, but watching Apollo 11 is so immersive it feels as if you’re living the Apollo 11 mission. (Do yourself a favor and see it on the biggest screen you can. It has an exclusive one-week run in the mega-screen Imax format before expanding to more theaters.) Aldrin, who has been championing the film on Twitter, says it’s the closest anyone has come to re-creating the real thing. Miller and his team also benefited from another unexpected find: more than 11,000 hours of undocumented audio recordings that captured dialogue from all key personnel during every moment of the mission. The audio paints such a vivid picture that the movie has no narration, relying instead on the recordings, and the occasional voiceover from archival newscasts, along with on-screen data (countdowns, speedometer and altimeter data, astronauts’ vital signs) to shepherd the audience through the mission.

Apollo 11 is more than just a technical achievement. By integrating scenes from the ground, including the estimated million people who dotted the Florida coastline to catch a glimpse of the launch, it captures a seemingly fleeting moment in American history when nearly everyone was united in a moment of wonderment and pride. Sure, the space race may have been a hubristic endeavor aimed at asserting Cold War technical dominance over the Soviets, but it was a race, and we won. Near the middle of the documentary, we hear a news anchor mention the earthbound news of the day, including the ongoing horrors of the Vietnam War and the Ted Kennedy Chappaquiddick scandal, details of which were just emerging as the astronauts hurtled toward the moon. It’s a reminder of how divided the nation was about to become and remain, outside the orbit of the mission.

By the time Armstrong and Aldrin guide the lunar module Eagle toward the moon’s pockmarked surface, the movie has somehow built a shocking sense of suspense. It’s cliché, but not hyperbole, to say that Miller’s documentary is a giant leap forward for the craft, not to mention for historical preservation. It’s also a nostalgic look backward to a time when, instead of staring down in boredom at screens in our palms, we gazed up in wonder at the stars.