You know Isle of Dogs is a Wes Anderson film in the first few seconds: Each shot is as bold and wonderfully textured as a Van Gogh. Like his previous stop-motion animation film, 2009’s Fantastic Mr. Fox, the colors are so bright and characters and plots so whimsical that his stories take a back seat.

If you’re an Anderson fan, this movie is for you — it earned the top Rotten Tomatoes score (96 percent) of his quarter-billion-dollar career. All the familiars are there: awe-inspiring world-building, hilarious one-liners, Bill Murray. It’s set in fictional Megasaki, Japan, where the humans speak Japanese, sometimes subtitled, and the dogs speak English. The cast is a who’s who of grownup vocal talent: Bryan Cranston, 62, Harvey Keitel, 78, Liev Schreiber, 50, Courtney B. Vance, 58, even Yoko Ono, 85. The dogs include Murray, 67, F. Murray Abraham, 78, Jeff Goldblum, 65, Edward Norton, 48, and Tilda Swinton, 57. But the vocal star is double Oscar winner Frances McDormand, 60, who provides a ton of humor as a translator who pops up throughout the film. 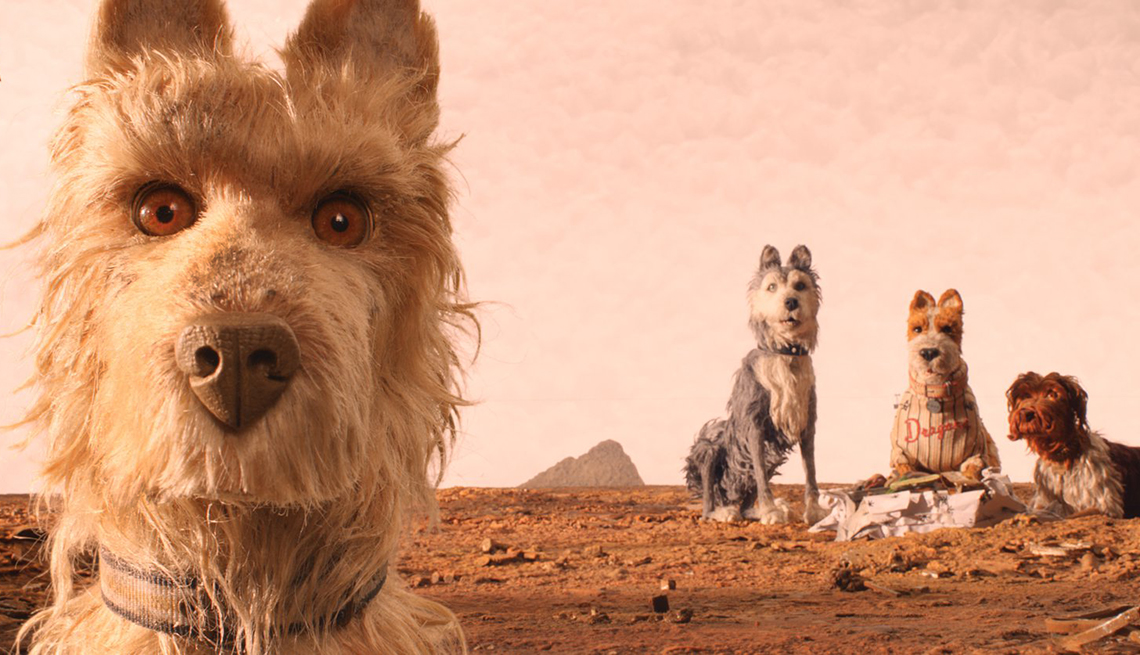 As often with Anderson, two parallel stories converge, with many a flashback and droll aside. Strongman Mayor Kobayashi bans all dogs from Megasaki, exiling them to Trash Island, near the city. The mayor’s nephew crash-lands a stolen biplane on the island to rescue his canine bodyguard, Spots (Schreiber), with help from top dog Cranston. Meanwhile, back in Megasaki, an American exchange student (Greta Gerwig) works to expose Kobayashi’s corruption.

Anderson is clearly enamored of Japanese culture and film, and skillfully pays his respects to classics including Seven Samurai. But good as Gerwig is, her B plot feels lazy and unearned. If you want to see it with animation-loving offspring, Isle of Dogs falls in the gray area of child-friendly, with its confusing translations and reliance on visual humor. It’s good for the teenage grandchildren, who will likelier get the jokes and oddball storytelling style, though you may like the psychedelic 1965 soundtrack tune and Oscar-hogging Alexandre Desplat's taiko-heavy score better than they do.

All that said, Isle of Dogs is still a wonder of visual filmmaking, with lively voices and Anderson’s trademark humor. It’s worth watching just to hear dogs Bryan Cranston and Edward Norton arguing about “pack democracy.”