Lebanon’s 1975-90 civil war, which killed about 120,000 of its 4 million people, is not exactly over, as proven by the skyrocketing career of its most famous filmmaker, Ziad Doueiri, 54, a cameraman for Quentin Tarantino’s first four movies. Even though his biggest hit yet, The Insult, about a court case between a Palestinian refugee and a Lebanese Christian who won’t forget the war’s tit-for-tat massacres, is Lebanon’s first-ever nominee for the foreign-film Oscar (and also for AARP’s Movies for Grownups Awards in February), Doueiri was briefly arrested at the Beirut airport right after the Venice Film Festival nominated it for best picture.

His previous movie The Attack, about a respected Arab Tel Aviv surgeon whose wife becomes a suicide bomber, was voted best picture at four international film fests, and banned by all 22 Arab League nations. Doueiri could have been executed for treason because he had shot scenes in Israel with an Israeli playing the Palestinian bomber. (The Middle East is a place where Wonder Woman was banned because its star was once an Israeli soldier.)

But because nobody is better at dramatizing its politics in gripping personal stories, Doueiri has a fan base there, too. Though The Insult gives a vivid glimpse of Lebanese society — many hotheads in a hot place — it’s also rooted in today’s indie cinema and Hollywood classics. It’s largely a smart, sensitive courtroom drama like the Oscar-nominated Paul Newman film The Verdict, and the dueling attorneys are a father and daughter with personal issues, like Gene Hackman and Mary Elizabeth Mastrantonio in Class Action.

The insult that sparks the action happens when Christian nationalist Tony (prizewinning Lebanese actor Adel Karam) waters his balcony plants and accidentally drenches a high-strung construction worker below, Palestinian refugee Yasser (Kamel El Basha, the first Palestinian ever to win best actor at Venice). Such an argument really occurred between Doueiri, who insulted a Palestinian worker, who then refused to accept Doueiri’s apology. The Insult is about what might happen if the argument erupted into a court case that riles up people on both sides. 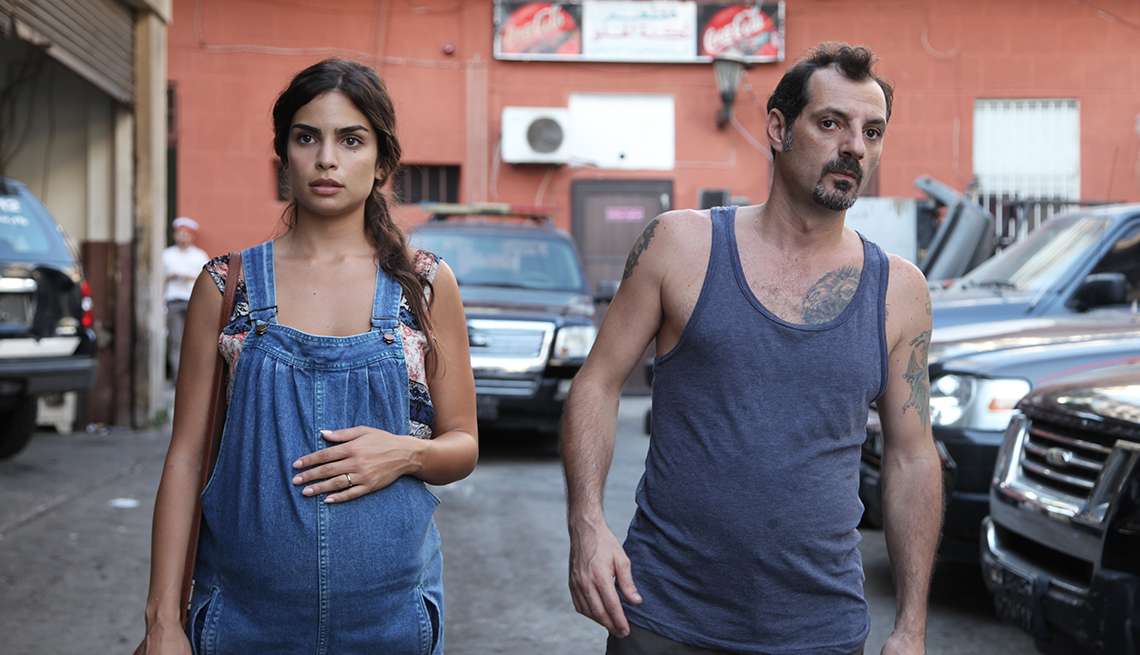 Rita Hayek plays the pregnant wife of Adel Karam, who stars as a Christian nationalist, in "The Insult."

Doueiri makes you see where everyone is coming from emotionally and historically. Tony, whose childhood village was attacked by the PLO just as Palestinian refugee camps were attacked by Christians, isn't feeling the forgiveness part of the Christian tradition. "I'm not Jesus Christ to turn the other cheek!" he snaps. "No, we are not all brothers."

Doueiri says that to apologize is against Lebanese tradition, so neither guy can bear to say he’s sorry, even after they come to blows and their wives berate them for obviously being at fault. (Doueiri, a secular Muslim and French-Lebanese citizen, wrote the movie with his ex-wife Joelle Touma, a Lebanese Christian.) Apologies incite more violence, and yet, in a largely unsentimental way, the movie shows the enemies inexorably growing to understand each other, sometimes to sympathize, entirely against their will.

The Insult isn’t just about Lebanon, or the Middle East. Doueiri says that at film festivals in Spain and India, different audiences saw their own conflicts in it, between Catalonian separatists and the Spanish government, between Muslims and Hindus. Americans will think of our own politically divided society. It is very hard to see hope in any of these conflicts. Without being a Pollyanna — and because he is one talented filmmaker — Doueiri makes it seem as if, just maybe, people can conquer history and stop attacking each other. And even if you don’t buy that prospect, The Insult is a terrific yarn with deep characters, superb acting, sharp dialogue and entertainment value that transcends its historical importance.