Even if you can’t quite place the name, you remember Gloria Grahame, the pouty-lipped film noir star. She was once the flounciest floozy in movies. She tried to pry James Stewart away from Donna Reed in It’s a Wonderful Life, got hot coffee in the face from gangster Lee Marvin in The Big Heat, puckered for any guy who said her lips were like cherries in Oklahoma! and played Bogart’s lover in the masterpiece In a Lonely Place.

She earned two Oscar nominations and won for her husband Nicholas Ray’s The Bad and the Beautiful. But after she wooed and eventually married Ray’s young son Tony Ray, her career chilled. To be fair, Nicholas was no innocent — he bedded the 16-year-old Natalie Wood — but Hollywood is not fair to female sexpots. In her 50s, Grahame wound up doing stage shows like The Glass Menagerie in non-prestige theaters in Britain.

That’s where Grahame, 54, met actor Peter Turner, 26, in 1978 at a theatrical boarding house. She invited him to come into her room and dance with her to “Stayin’ Alive,” then asked him to lend her five quid. The odd but loving couple lived it up until her death from cancer at 57 in 1981, bouncing between London, Manhattan, his parents’ place in Liverpool, and Pacific Palisades, Calif.

The touching film of his memoir Film Stars Don’t Die in Liverpool chronicles their poignant yet seemingly deeply fun relationship and stars the best possible actress: Annette Bening, 59. Bening was a great stage actress and bit-part film starlet until age 31, when she earned the first of her four Oscar nominations as a high-strung, down-on-her-luck con artist in The Grifters. She modeled that breakout role, which critic Hal Hinson called “one of the most feline performances in movie history,” on Gloria Grahame’s movies, and also on her desperation and subversive determination. 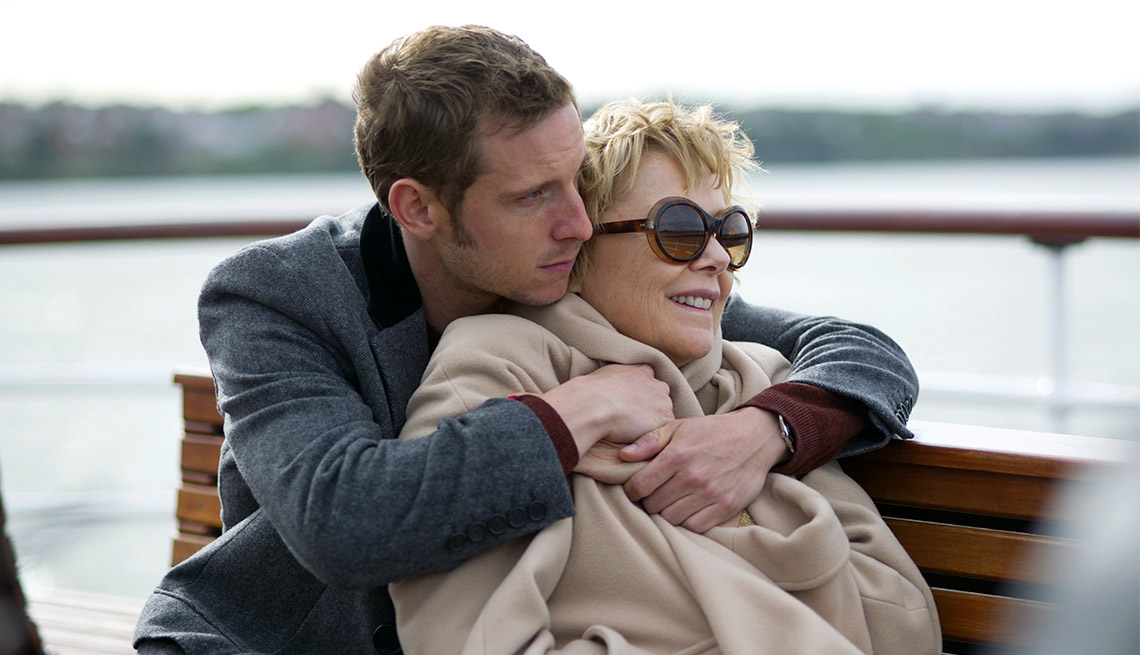 Jamie Bell, 31, and Annette Bening, 59, live out a romance in "Film Stars Don't Die in Liverpool."

Bening rewatched Grahame’s movies to play her and nimbly captures the actress’ never-say-die charisma and diva moves. It’s breathier than usual for Bening, but not a celebrity impression, and she doesn’t try to approximate Grahame’s trademark pout, notoriously tortured by bad plastic surgery and wads of cotton stuffed under her upper lip. Mainly, Bening captures Grahame’s classic-Hollywood girlishness, her ambition and a defiance of aging as heroic as it was neurotic. At an age when actresses get to play the Nurse in Romeo and Juliet, Grahame still aimed to play Juliet. Like the actor who plays him (Jamie Bell), Turner didn’t know who Grahame was at first. Somebody tells him, “She was a big name in black-and-white films — not doing too well in color.”

Yet her life seems quite colorful — she’s stayin’ alive as an artist and a romantic — and there’s some sweet humor when the film star moves in with Turner’s working-class Liverpool relatives as her illness gets serious. Julie Walters, 61, Oscar nominated as Bell’s ballet teacher in Billy Elliott, plays his mum this time, and their scenes together are like a warm bath of sentiment. So are the scenes in L.A., where Turner met Grahame’s stage mother (nicely played by Vanessa Redgrave).

In fact, the whole movie is a warm bath, and that is its achievement and its limitation. There are a few flinty touches, as when Grahame’s sister (Frances Barber) tells Turner that Tony Ray was 13 when his dad caught him in bed with Grahame, and Grahame snaps an unsentimental response. But this movie is mostly about honorable romance remembered in melancholy, not scandal, bad behavior and reckless impulsiveness.

I would have preferred something harsher, with infinitely more backstage film drama, which might explain why we care about Gloria Grahame and the many movie masters in her life: her neighbors Bogart and Bacall, her rebel husband Nicholas Ray, and his son Tony Ray, who grew up to be the Oscar-nominated producer of An Unmarried Woman. This movie is emotionally rewarding, but most Gloria Grahame movies are startling as a gangster's slap in the face. Go watch all her hits, plus the forgotten 1979 masterpiece Chilly Scenes of Winter, in which she plays a highly theatrical madwoman.

Bening deserves awards for yet another performance of lapidary exactitude, but there's a deeper look at theater people's lives in her Oscar-nominated Being Julia, and she was closer to the anarchic, scary spirit of Grahame when she channeled her in The Grifters. Film Stars Don’t Die in Liverpool shows Gloria Grahame’s softer side — so it’s the absolute opposite of the noir films that made her famous. Bening convinces us that Grahame was, for all her eccentric genius and pride, quite soft-boiled.