Before Judi Dench became an overnight movie star at 63 with 1997’s Mrs. Brown, everyone thought of Queen Victoria as a dour, sexless being who was not amused, let alone aroused. Dench showed us a devastated widow whose monarchical heart blooms thanks to the love of her commoner bodyguard, John Brown. Now, at 82, she plays Victoria when a new man caught her twinkling eye after Brown's death: India’s hunky young Abdul Karim (Furious 7’s Ali Fazal), who really was her Urdu teacher but probably didn’t rank as high in her heart as this film entertainingly claims. Still, if you crave a fix of Brit royalty while waiting for Season 2 of The Crown,  this is your jam.

Many viewers and Oscar voters will swoon for Victoria & Abdul, inspired by Abdul’s diaries that were discovered in 2010. (After she died, Victoria's own letters to Abdul were burned by the royals to erase him from history.) Directed by Stephen Frears, 76 (The Queen, starring Helen Mirren), it is sumptuously shot by Danny Cohen, 53 (The King’s Speech, The Danish Girl, Les Misérables). Despite the macular degeneration that vexes her, Dench’s eyes in close-up can still outact all competition. Perhaps that's because she gets so much practice: $3.5 billion worth of movies since she turned 70, and three films this year alone.

Her Victoria starts out a sad captive of her own castles, occasionally attended by an irritable son (Eddie Izzard, 55) who wants her to die and hand him the crown already. When Abdul gets whisked from Uttar Pradesh to London in order to present the queen an official gift from India, he’s warned not to look in her eyes. He impulsively smooches her feet, and she says, “I suddenly feel a great deal better.”

So do Anglophiles in the audience, as Victoria snaps back to life, whirling on the dance floor with her new quasi-swain. Abdul works his way up to being her “munschi” (teacher), instructing her in Arabic script and curry cuisine, peeving jealous courtiers like the prime minister (Michael Gambon, 76) and dashing off with her to Scotland and Florence, where Simon Callow, 68, has a blast playing Puccini, who's performing his latest opera. He coaxes Victoria to sing “Little Buttercup” from H.M.S. Pinafore in a girlish voice. You can’t help but applaud, even if you're not loyal to royals. 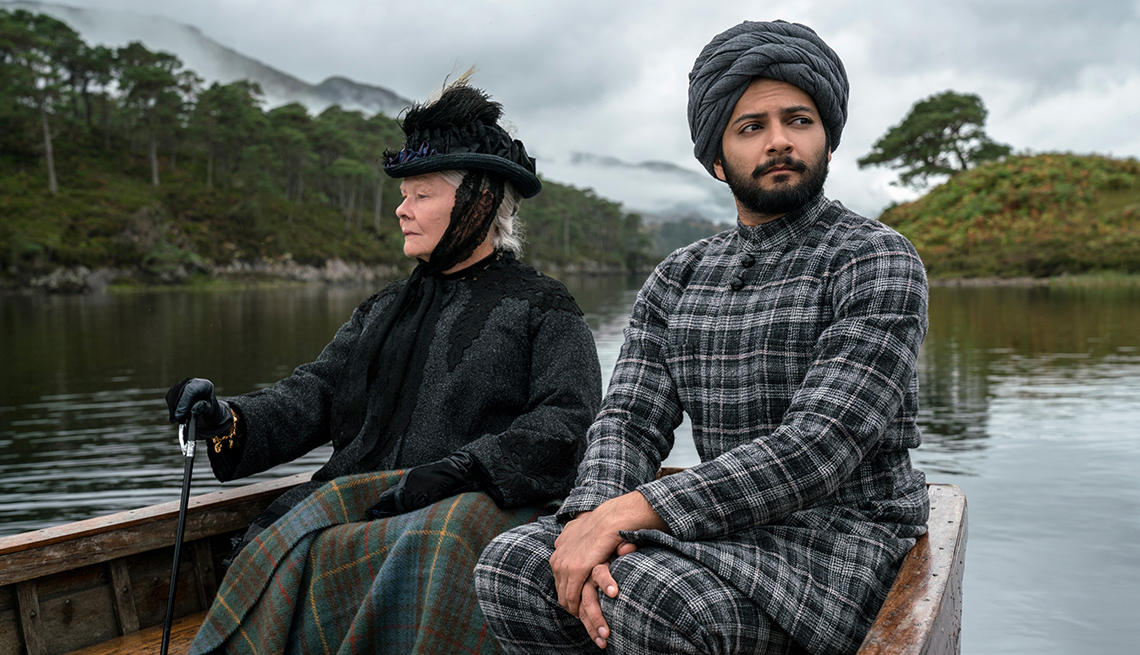 Besides Dench’s inimitable skill — which makes you wish that all stars were forced to become great Shakespearean stage actors who win eight Olivier Awards before their first hit film — it is inspiring to see her rebuke her ageist retainers. Her indignant speech defending her sanity has the righteous sting of Derek Jacobi’s climactic rebuke of the Senate in I, Claudius. Her Victoria often sounds like Dench herself, who has said that "retire" is the "rudest word in my dictionary.”

“Well, of course, you still feel desire. Does that ever go? To the older reader, I would say: ‘Don’t give up.’ ” After the 2001 death of her beloved husband, Michael Williams (her costar in the British television series A Fine Romance), Dench unexpectedly found a new love, which may have enriched her performance here.

Victoria & Abdul is just good enough to hold your interest, and no better. That's why snooty top critics on Rotten Tomatoes rated it 38 percent, regular critics rated it 68 percent and 90 percent of viewers want to see it. But it’s a must-see for Dench fans — and who isn’t a fan? She won an Oscar for an eight-minute role as Queen Elizabeth I in Shakespeare in Love, and revisiting Victoria in love likely will get her an eighth Oscar nom (and — who knows? — perhaps her 10th AARP Movies for Grownups honor). We haven't heard the last of Judi Dench.