﻿﻿It should have worked because De Niro has always had superb comic timing, and here he’s surrounded by similarly gifted — and usually funny — costars: Leslie Mann, Danny DeVito, Cloris Leachman, Charles Grodin and Harvey Keitel. What’s more, every time Jackie turns a corner he manages to run into another comedy legend, from Brett Butler and Jimmie Walker to Gilbert Gottfried and Billy Crystal.

Director Taylor Hackford (﻿Ray﻿) ably guides them all through a universe of grungy nightclubs, cluttered soup kitchens and, in the final act, a rather lifeless Miami retirement home. But laughs? I laughed more at ﻿Manchester by the Sea﻿, and that was the year’s saddest film.

﻿﻿The hard fact is, you make a movie about a stand-up comedian at your own peril. If the film clicks, as ﻿Man on the Moon﻿ did when Jim Carrey channeled Andy Kaufman, the laughter of the audience shown on screen rolls into that of the warm bodies assembled in the theater, and a magical kind of “cinergy” is achieved. But when that click doesn’t occur — when the scripted jokes of a comedian caught on camera fall flat with a live theater audience — the onscreen guffaws become not just perplexing but mortifying. And that’s the unfortunate case here: While the big-screen crowd is losing it, we’re just lost.

﻿﻿We first see Jackie working his craft at what looks like a VFW hall on a Tuesday night. Just two or three forgettable jokes into his act, he spots a guy illegally recording the show, leaps off the stage and pummels him.

﻿﻿Why is Jackie so angry? Mostly, it seems, he’s bitter about the professional straitjacket he’s been in since starring in a schlocky 1980s sitcom. Three decades on, no one wants to hear his mean-spirited insult jokes — instead they want him to stand onstage and declaim the stupid catchphrases that made him famous. 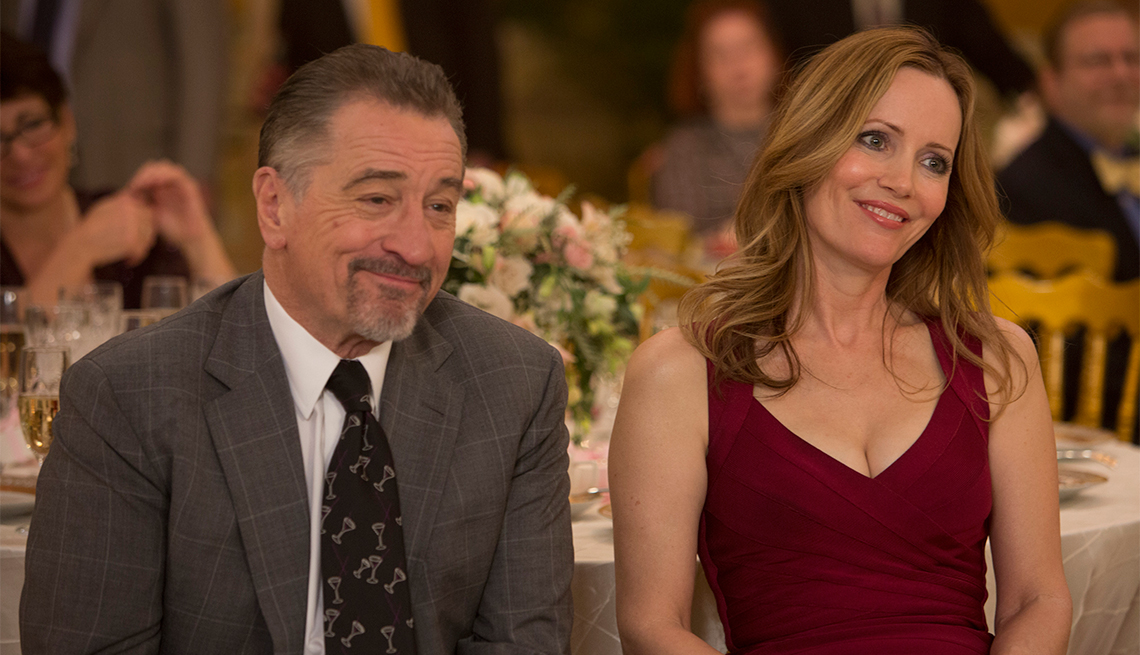 Robert De Niro and Leslie Mann in "The Comedian"

The comedy-club beatdown lands Jackie in community service, working at a soup kitchen alongside a woman named Harmony (Leslie Mann), who’s atoning for an attack on her sleazy ex-husband. They hit it off — a broken jar of olives is the meet-cute device — and before long they’re an odd romantic item.

﻿﻿As Jackie drags Harmony from one low-rent comedy gig to the next, it’s a comfort to witness the easy, bantering chemistry between De Niro and Mann. But again the script (by a team of four writers) lets them down. Their dialogue is supposed to be funny, but remember that old line about how a true comic can get laughs reading the phone book out loud? It’s not true. And while a telephone-directory script would not be an improvement for ﻿The Comedian﻿, neither would it subject us to a cringeworthy retirement-home scene where Jackie slays ’em with a rendition of “Makin’ Whoopie,” cleverly substituting “poopie” for “whoopie.” Yes, it’s every bit as bad as you imagine — yet the script expects us to believe that a viral YouTube video of the shtick resurrects Jackie’s career.

﻿﻿Director Hackford transcends the script here and there, crafting the beginnings of interesting relationships for Jackie with, for example, his adoring brother (DeVito) and his long-suffering manager (Edie Falco). In these scenes, Jackie isn’t trying to be funny; he’s trying to relate to other human beings. But these moments end too soon and Jackie returns to the spotlight, killing us softly with his slurs.

﻿﻿When you have to go the Foghorn Leghorn route — “That’s a joke, son!” — the joke is actually on you. And that’s not funny, either. ﻿