You know Sam Elliott even if you don't recognize the name. He's a long drink of water with twinkly eyes, big wry eyebrows, a horseshoe mustache, and a low, smoky drawl that moseys as slow as the Rio Grande. After playing a cowboy in Butch Cassidy and the Sundance Kid, he was cast as a lead in 1976's Lifeguard, Cher's lover in Mask, and a cowpoke of genius in Tombstone and The Big Lebowski.

Now on a startling roll at 72, with scene-stealing parts opposite Lily Tomlin in Grace and Frankie and Debra Winger in The Ranch, the silvery fox has the role of a lifetime in The Hero, a movie that fits him like a bespoke cowboy outfit. Director Brett Haley, who gave Gwyneth Paltrow's mom, Blythe Danner, the role of her life at 72 in 2015's must-see I'll See You in My Dreams (with Elliott as her lover), creates a terrific character for him in The Hero: cowboy film star Lee Hayden. Think Lee Marvin crossed with Sterling Hayden. 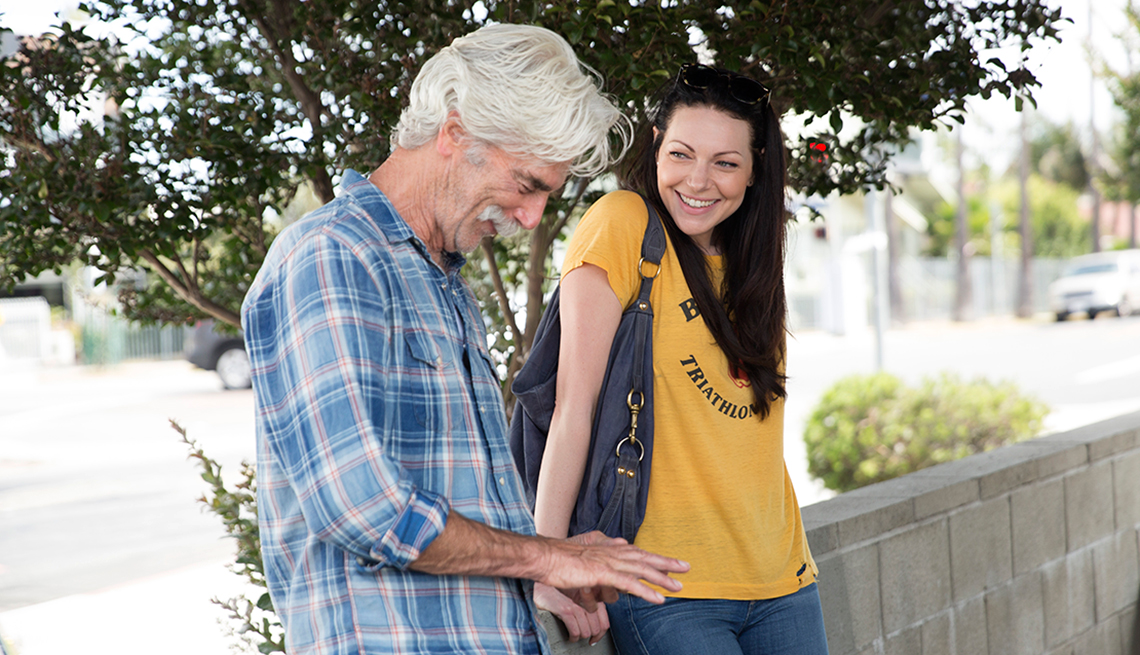 Beth Dubber/Courtesy of The Orchard

Sam Elliott and Laura Prepon in "The Hero"

Facing his life's sunset, Lee voices commercials to survive and gets high with his pot dealer, an old-time cowboy-show sidekick (laconic Nick Offerman, who costarred with Elliott on the top notch Parks and Recreation). They bond in melancholy, but then in walks another pot customer, stand-up comic Charlotte (Laura Prepon). At 37, she's a pistol, and her chemistry with Elliott is entirely convincing. She has a thing for older guys, reignites his life, puts him in mind of the masterpiece he's always wanted to make (called The Hero — we see glimpses of it), and gets him into big trouble at a Hollywood cowboy awards show that improbably makes him famous.

Elliott and Prepon effortlessly navigate the script's occasionally clunky or clichéd moments, and I repeat that their May-December romance isn't the usual contrived stuff. They're the genuine article, partly because he's sexier than the average septuagenarian. At an AARP sneak preview of The Hero, 700 people mobbed him. "When Sam walked out, it was like everyone turned into a teenage girl," Haley said. But you don't have to crave the tickle of Sam's mustache to go wild over The Hero. In merely career terms, he's the hottest 72-year-old star in Hollywood.