As Charles Dickens stricken with writer’s block, Downton Abbey’s wholesome intellectual hunk Dan Stevens is good fun, but the reason to see the story of how he produced A Christmas Carol in six weeks flat is Christopher Plummer, who turns 88 Dec. 13. Plummer, the oldest-ever Oscar winner (for his 2012 AARP Movies for Grownups Award winner Beginners), is on an accelerating roll, with six 2017 movies, including Ridley Scott’s All the Money in the World, replacing disgraced Kevin Spacey after shooting had concluded. When great directors are up to their nose in trouble, they call the Plummer.

Yet Scrooge is the role he was born to play. With his immense, winged eyebrows; baggy, malevolently narrowed eyes; and eloquently flexed wrinkles, he’s as good as Alastair Sim in the 1951 version (the one to beat). But this isn’t a Scrooge you’ve seen before. He’s just a bitter figment of Dickens’ imagination, as the once-successful writer desperately tries to break a losing streak and fend off debtor’s prison. Dickens really did converse aloud with his characters, and he and Scrooge have each other’s number.

“A tight-fisted hand at the grindstone, Scrooge!” snaps Dickens. “A squeezing, wrenching, grasping, scraping, clutching, covetous old sinner!” Flashing his sardonic bulldog underbite, Scrooge snaps, “Three flops in a row, up to your eyes in debt … and you still don’t have an ending!” How can Dickens reconcile his stingy, Malthusian protagonist’s wickedness and the audience’s demand for a ghost story with a happy ending? His publisher rejects it before he writes it because there’s no market for Christmas books — and nobody in England has yet even heard of a “Christmas tree.” How could they possibly lack faith in a book originally entitled Humbug: A Miser’s Lament? 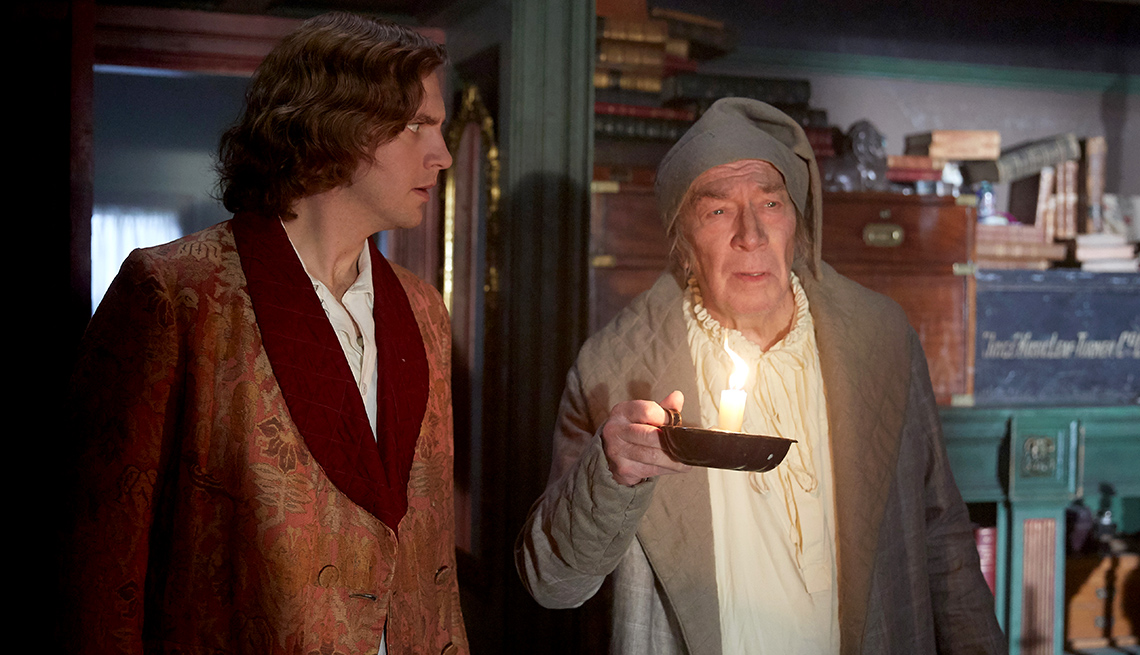 Dan Stevens, left, stars as Charles Dickens, and Christopher Plummer stars as Ebenezer Scrooge in "The Man Who Invented Christmas."

Like Shakespeare in Love or Finding Neverland, the film depicts the visions and revisions leading up to a masterpiece, the random bits of life that intrude on the author and flow out of his pen to the page. Scrooge is inspired by a boor who tells the parson at a funeral that he isn’t paid by the hour, so get on with it. Tiny Tim begins as Dickens’ crippled nephew. The three Christmas ghosts are inspired by folk tales by his Irish orphan housemaid. He jots down resonant names, like Marley, the waiter at his club (where rival best-selling author Thackeray keeps sadistically comforting Dickens on his tanking career).

The most important influence is Dickens’ con-man dad (genius Jonathan Pryce, 70, of Game of Thrones). John Dickens’ fecklessness forced Charles into a 70-hour-a-week shoe-polish factory job at 11, and 20 years later John is still trying to spend his son into the poorhouse — right when Charles' wife is pregnant for the fifth time. “You are nothing but a drag and a chain upon my life!” he yells at his father. Clearly, his filial bitterness is like Marley’s chains of greed — something he must renounce to fix his life and do right. Pryce’s haunted, kindly, infinitely mischievous eyes are perfect for the part, and his fiscal miseries add a welcome tang of reality to this warm treacle of a Christmas tale by Mozart in the Jungle writer Susan Coyne.

This isn’t the greatest film ever to spring from A Christmas Carol. (That would be It’s a Wonderful Life, whose script was reworked in part by Dorothy Parker and Clifford Odets, who were more tolerant of sorrow than Coyne is.) It lacks the fathomless horror before the redemptive ending that makes the original (and Wonderful Life) immortal. But it’s still delightful, like director Bharat Nalluri’s lighthearted 2008 Frances McDormand screwball comedy Miss Pettigrew Lives for a Day, only a bit better. Nalluri offers the lighter side of a holiday whose deepest meaning depends on facing death square in the face before the hallelujahs arrive. But that’s OK. As critic Philip Marchand said of Miss Pettigrew, “You can't criticize a soufflé for not being a side of beef.” The Man Who Invented Christmas is one tasty soufflé.