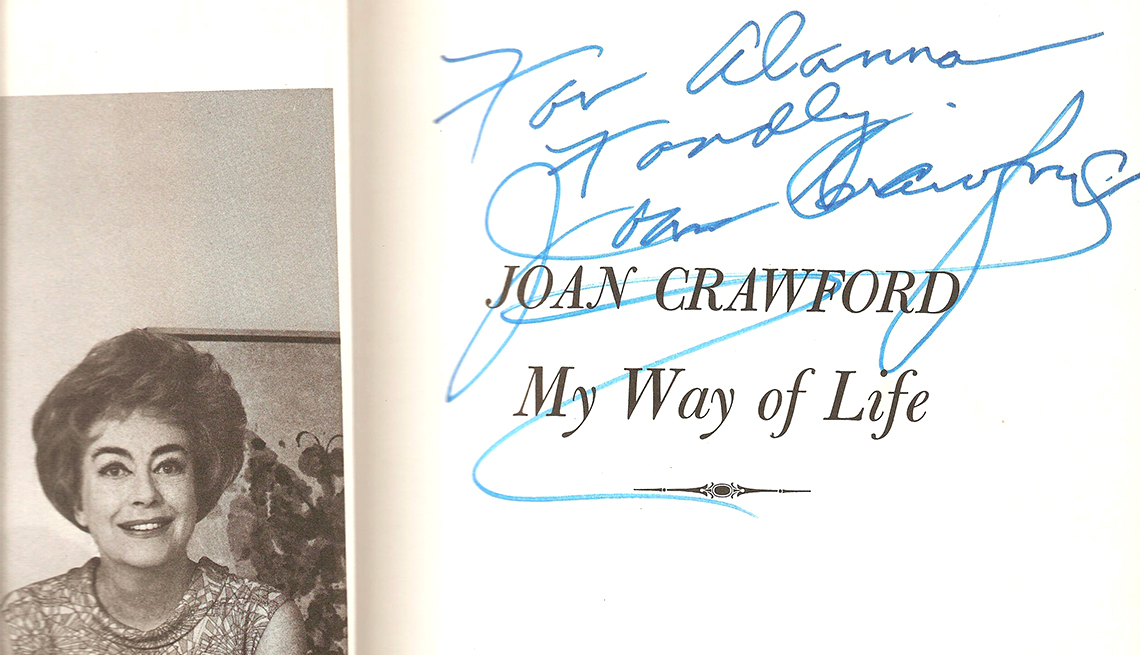 Autographed copy of "My Way of Life" belonging to Alanna Nash

When FX aired the first of its eight-episode series Feud, starring Jessica Lange as Joan Crawford and Susan Sarandon as Bette Davis, I was watching with rapt attention. I was also squirming in my seat.

For seven years, Crawford's letters, almost always on her pale blue stationery, landed regularly in my mailbox, and I spent many hours at her co-op in the Imperial House on New York's East 69th Street — not as a journalist, but as a guest.

My friendship with the star was by turns loving and difficult. She was electrifying, terrifying, unnerving and even demeaning. The fact that she gave me any time at all, however, seemed surreal.

Yet, even at its most strained, our friendship was never as vituperative as her relationship with Davis, which started in the 1930s, when Davis fell in love with Franchot Tone, the cultured actor Crawford pursued and married.

The FX series, which mirrors Shaun Considine's 1989 book, Bette and Joan: The Divine Feud, focuses on the filming of What Ever Happened to Baby Jane?, the 1962 camp horror picture that banked on the actresses' legendary disdain for each other. The tart-tongued Bette famously said of the sexually rambunctious Joan: "She slept with every male costar at MGM except Lassie." And Joan snapped that Davis appeared to have "never had a happy day — or night — in her life."

In a letter circulating now on the internet (the stationery, wording and signature appear authentic to me), Crawford purportedly wrote to director Robert Aldrich on Aug. 11, 1962: "Bob Dear, I hope by now you have had an opportunity to talk with Bette about her body odor. It is quite the distraction for me working within close proximity to her if she refuses to bathe or wear adequate deodorant. I have found myself gagging on several occasions during this filming. Fondly, Joan."

I met Crawford in May 1970, when I was a 19-year-old student at Stephens College in Columbia, Mo., which Joan had attended for some two months before dropping out. The school invited her to return to receive a citation for life achievement, and I covered her visit for the school paper. I was surprised to receive a thank-you note from her some weeks later, and I wrote her back.

So began our long correspondence, and during the years, we also talked on the phone nearly a dozen times. During my time in 1973 and 1974 at Columbia University's Graduate School of Journalism, she had me over to her apartment on five occasions. The first two were to help her move from one unit to another. The third was to see the new place. "What do you think?" she asked me. There were plastic coverings on all the furniture, and I found the prominent color, Pappagallo green, not to my taste. "It's, it's big!" I stammered. "I didn't ask you about the size," she leveled. "I asked you about the decor!"

Each visit, she wore the same outfit — a simple smock and beach thongs, her hair held back with a rubber band, and her only makeup a slash of red lipstick. Because these visits were remarkably tense, I began taking people with me. At Easter, I invited my childhood sweetheart, John Egan, over to play backgammon, Joan's favorite pastime. She answered the door in a disguise — a wig and sunglasses — explaining that she'd had some threatening calls.

John was a novice, and she a veteran enthusiast. She was extremely impatient with his slowness at studying the board, and her demeanor spooked him, especially when she picked up his hand and guided it around the board.

To this day, he is a good sport about her imperiousness. "The impression I got," remembers Egan, now an architect at the National Institutes of Health, "was she just held herself to a very high standard and expected the same of everybody she met. You could never be good enough."

On the other hand, she could be incredibly kind. She was quick with favors, such as arranging an interview for me with Debbie Reynolds, who was then playing in the Broadway musical Irene. But I never quite knew where I stood. My head spun just being around her.

When I graduated that spring and returned home to Louisville, Ky., we continued to correspond. In 1976, she asked about my current project, which was an in-depth look at the McCarthy era and the House investigation of Hollywood, and I foolishly thought Joan might tell me how she'd been duped into becoming a member of several communist front organizations in the '30s, when she was married to Tone, who was called to testify in front of the House Un-American Activities Committee.

But I was mistaken. She was furious with me, and called for an angry, hour-long conversation during which she encouraged me to abandon my project. Later, she sent the only handwritten letter I got from her, which was conciliatory, but firm. When I made two attempts to see her in 1976, she said she would be traveling. I never saw her again.

On May 10, 1977, she died. She gave her age as 69, but I believe she was really 73. Newspapers reported the cause of death as acute coronary occlusion, but according to one of her daughters, Christina, whom I interviewed upon publication of her autobiography, Mommie Dearest, the actual cause was liver cancer. I was not surprised. I once spotted a case of vodka in her bedroom closet.

I attended her memorial service at All Souls Unitarian Church in New York, where her Autumn Leaves costar Cliff Robertson delivered a warm eulogy, and stood around afterward to talk with mourners. I shook his hand and cried.

George Cukor, who directed Joan in The Women and two other films, wrote that somehow he didn't believe Joan Crawford would ever die. As long as people watch her films and dramatizations such as Feud, I suppose she never will — especially not to me.