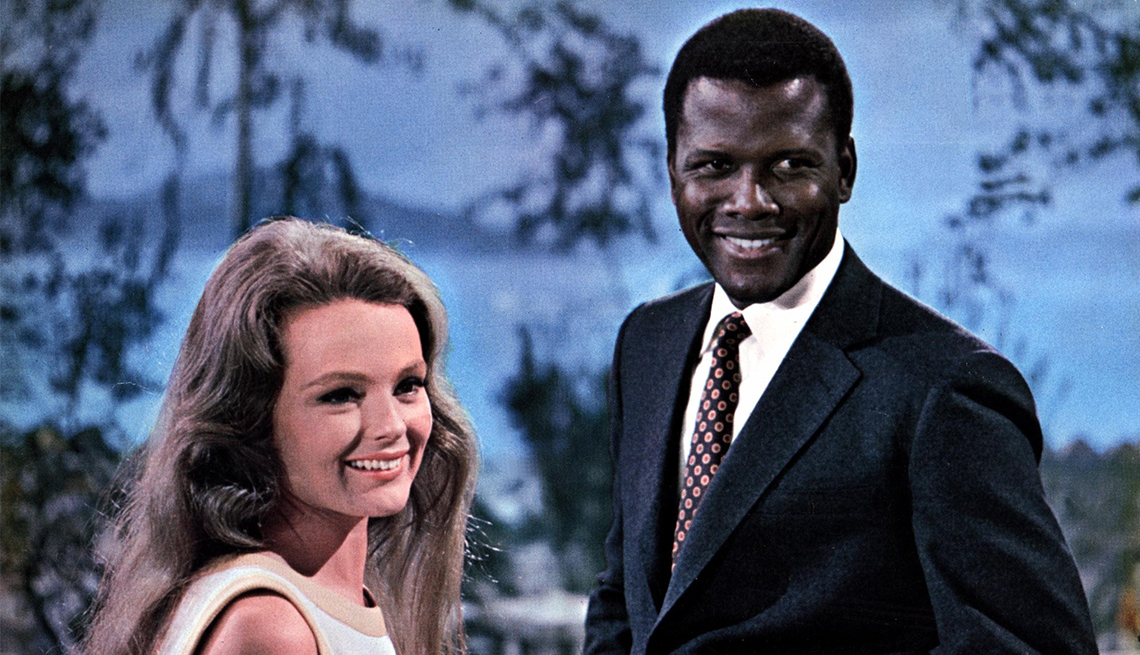 Katharine Houghton and Sidney Poitier in the ground-breaking drama, ''Guess Who's Coming to Dinner"

Oscar-nominated films often are a reflection of society's current attitudes on topics as wide ranging as race, crime and family values. This year's Oscar night once again brings a story about race center stage: The movie Loving portrays the relationship between a white man and a black woman, and the marriage that changed America 50 years ago.

Loving arrives on DVD this month just as Guess Who's Coming to Dinner — the seminal 1967 movie about a white woman's plans to marry a black man — celebrates its 50th anniversary with the release of a Blu-ray disc set. The two releases underscore the idea that the more things change the more they really do stay the same in Hollywood.

The Lovings' true story ended with victory in the U.S. Supreme Court on June 12, 1967, when all laws against interracial marriage were declared unconstitutional. Just six months later, Guess Who's Coming to Dinner began drawing crowds to movie theaters all over the U.S.

Ruth Negga's nomination for best actress is the only Oscar nod Loving received this season. Guess Who's Coming to Dinner got 10 nominations, though only actress Katharine Hepburn and screenwriter William Rose won. Loving has not been a box office hit, though it surely has made Negga a star. Guess Who's Coming to Dinner, however, was a crowd-pleaser, and, as the third consecutive hit movie for actor Sidney Poitier, it cemented his star status. He also starred in another movie about race that year — the award darling In the Heat of the Night.

Clearly, Stanley Kramer's Guess Who's Coming to Dinner continues to influence filmmakers. Next up is A United Kingdom, the true story of an international crisis that was ignited by the 1948 marriage of an African prince to a white London office worker.

Both A United Kingdom and Loving are intelligent, beautifully crafted films — but the difference is they arrived in a culture that is, on the whole, sympathetic to the main characters. When Kramer and his stars set foot on the Columbia Pictures lot in the spring of 1967, the studio fully expected it would be unable to market their film in the 16 states where interracial marriage was still illegal.

In fact, as Spencer Tracy tells his screen daughter in the film's most stirring scene, "There are 100 million people in this country who will be shocked and offended and appalled at the two of you."

Not exactly the tagline an ad agency would use for a movie poster.

"Columbia tried to pull the plug on the movie," recalls Karen Sharpe Kramer, widow of the director, who died in 2001. "And that was understandable — they didn't see how they would make their money back. They used the excuse that they were canceling the film because Spencer Tracy [who played Hepburn's husband] was so sick they couldn't insure him. But Stanley pledged his salary as insurance, and then Katharine did, too. That meant the studio had no legal choice but to make the film."

Stanley Kramer made a career of socially conscious films like Inherit the Wind (championing separation of church and state), Ship of Fools (combating anti-Semitism) and Judgment at Nuremburg (warning of the enduring danger of fascism). He first screened Guess Who's Coming to Dinner on the campus of Stanford University — where it was met with some confusion.

"The students stood up and said, 'This is such an old-fashioned movie — we're fine with interracial marriage,'" Karen Kramer recalls.

"But Stanley said, 'I didn't make it for you. I made it for your parents.'"

Even with the Supreme Court on its side, Kramer says, the studio tried to bury the film. It opened at a single Los Angeles theater that had been closed for years.

"But from the moment they opened the doors, there was a line around the block," says Kramer. Guess Who's Coming to Dinner became one of Columbia's all-time box office champions.

Unlike Loving, which has been widely praised for its portrayal of the Lovings as an unassuming blue-collar couple who would struggle to get along in the world even without their racial difference, Guess Who's Coming to Dinner was criticized for its decidedly upscale setting. What's more, critics said, Sidney Poitier's character was simply too perfect: handsome, passionate, a successful doctor who was a noted international humanitarian.

But in the context of America in 1967, Karen Kramer says, Poitier's character had to be perfect in order to pose an uncomfortable reality for the couple played by Tracy and Hepburn, who prided themselves on their liberal philosophies.

"There could be no other basis on which to object to their daughter's marriage," she says. "They had to face up to what they really felt about race."

Each year at the annual Producers Guild Awards, Kramer presents an award in her husband's memory to a film that raises public awareness of important social issues. Loving was the inescapable choice for this year's award.

"I think about [Stanley Kramer's] films, and they hit the same note of entertainment and social commentary" as Loving, producer Sarah Green told the Producers Guild Awards audience. "It's crucial to tell the stories that are important to us, and to tell the stories about rights that we've come to count on and might take for granted."

Adds Kramer: "The issues of Loving were the reason Stanley made Guess Who's Coming to Dinner.

"In the past, when I'd go out to talk about Guess Who's Coming to Dinner, people didn't even know who the Lovings were. Theirs was a story that needed to be told. It changed history."