Oscar nominee Jesse Eisenberg (The Social Network) perfectly channels Woody Allen in the comedy Café Society, the director’s newest — and 47th! — film. We asked Eisenberg if it’s difficult not to do that when you’re reading Woody’s words and following Woody’s direction. His reply: It’s not difficult — it’s merely impossible! 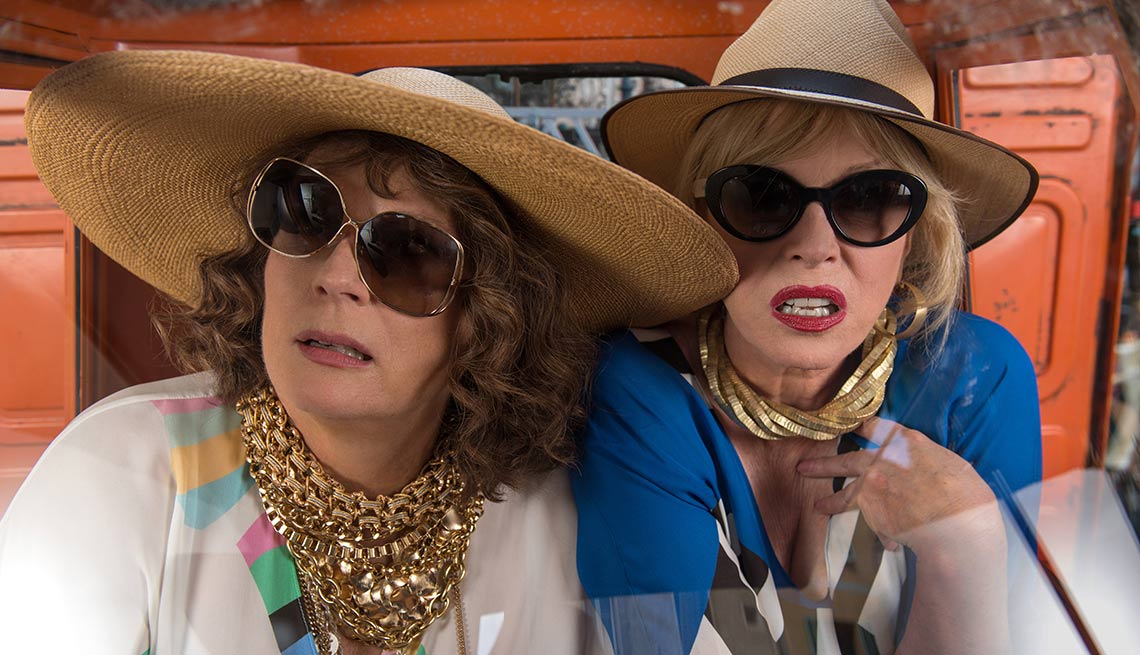 Jennifer Saunders as Edina and Joanna Lumley as Patsy in the film "Absolutely Fabulous: The Movie"

Can a cult British TV series that’s been off the air for four years become a smash hit stateside? We don’t understand it either, but from the instant in late April when we posted the trailer for Absolutely Fabulous: The Movie on the Movies for Grownups Facebook page, it’s been getting thousands of views each week. So … what’s the appeal of two appallingly self-centered middle-aged London party girls? Of her character, the chain-smoking, vodka-swigging Patsy, 70-year-old Joanna Lumley told London’s Independent, “Patsy doesn’t care about anything. Sometimes you think, What a relief that would be!”

Jennifer Saunders and Joanna Lumley return for a big-screen sequel to their long-running British sitcom, starring as a pair of hard-drinking, bad-mannered publicists. On the run after apparently killing Kate Moss (it was an accident!), they encounter dozens of star cameos — mostly of Brit celebs little-known to us colonists, but including the likes of Joan Collins, Jon Hamm, Jerry Hall, Perez Hilton and…wait for it…the singer Lulu who, 49 years after To Sir With Love, is still beloved in Britain.

Michael Shannon is the King; Kevin Spacey is the Prez. Both are pitch perfect in this delightful fly-on-the-wall look at Elvis’ impromptu 1970 Oval Office visit. FULL REVIEW

Producer-director-writer-star Don Cheadle’s heartfelt bio of Miles Davis follows the drug-addled trumpeter through a night-long quest to recover a stolen session tape. It’s a jumble out there, but Cheadle is brilliant. FULL REVIEW

The first two hours are spent setting up the unique conditions under which superhuman Superman and mere mortal Batman can fight on equal terms. By that time, they (and we) have forgotten what they were mad about. FULL REVIEW