(Video) The Light Between Oceans Movie Trailer: A lighthouse keeper and his wife living off the coast of Western Australia raise a baby they rescue from an adrift rowboat.

If you love to cry at movies — you know who you are — don't bring a hankie to The Light Between Oceans. Supply yourself instead with a roll of toilet paper, then thread it on a spindle in the drink holder.

This story of a lighthouse keeper and his wife who find a baby adrift in a dinghy and adopt it as their own — to say nothing of the heartbreaking circumstances that bookend their miraculous discovery — precipitates more than two hours of abject despondency in writer-director Derek Cianfrance's magnificently filmed, exquisitely acted new movie. It is based on M.L. Stedman's 2012 best-seller of the same name. Because my wife's book club hasn't gotten around to that novel yet, I can only assume the tearjerker that started it all is likewise as rollicking as a mortician's funeral.

The sorrow descends from the first frame, when we are greeted by the mournful eyes of Tom, a poor soul who has just emerged from four years in the slaughterhouse that was World War I. His thousand-yard stare, masterfully enacted by Michael Fassbender and studiously held for the film's entire length, betrays the horrors he has seen. Tom has returned to his native Australia to become keeper of the most remote lighthouse the maritime nation has to offer. What better perch to attempt escaping the demons no armistice can squelch?

Just before hopping on the launch that will take him to his new island home 100 miles away, there's a bit of mutual eye-catching between Tom and Isabel (Alicia Vikander), a businessman's fetching daughter. They begin an increasingly intimate correspondence, the letters transported by supply boats, and marry not long after. 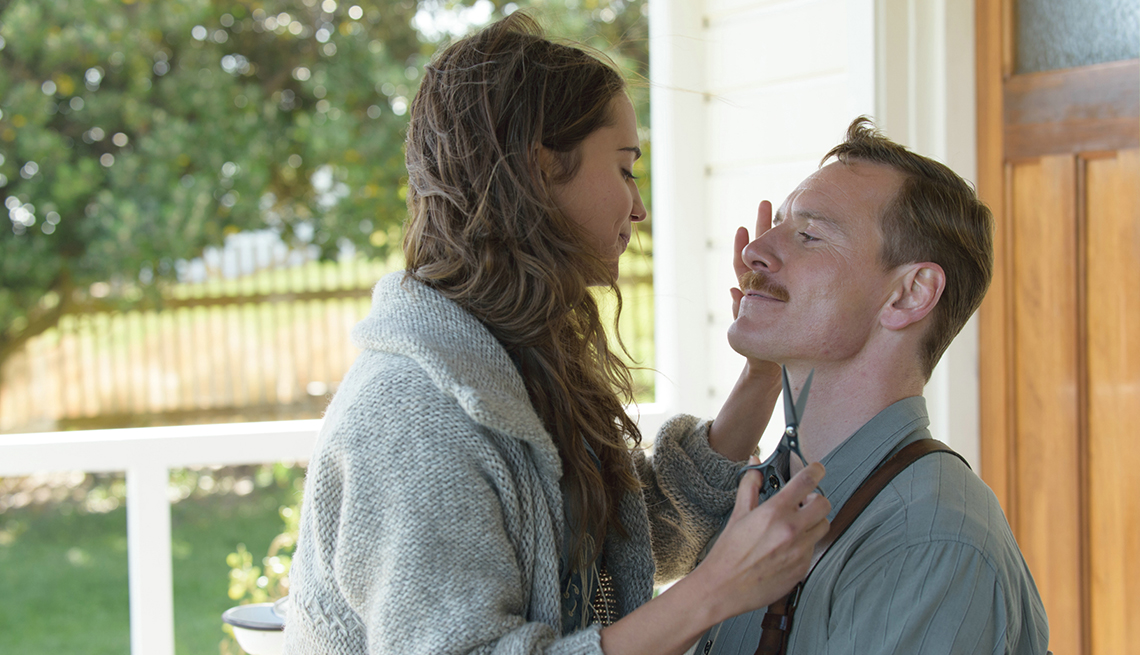 Alicia Vikander and Michael Fassbender star in "The Light Between Oceans."

The film allows the audience, and the couple, a single sequence of newlywed bliss, but we all know why we're here. These two are flying way too close to the sun, and the incendiary laws of Movie Melancholy are about to set the wax dripping from their wings.

Accordingly, Isabel gets pregnant but suffers a torturous miscarriage while locked outside the lighthouse during a typhoon. Another pregnancy follows — and we must witness a second, equally agonizing loss of a baby.

Even when the couple's dream of parenthood seems to float in on the tide — a rowboat washes ashore bearing a beautiful and healthy baby girl — the event is tempered by loss: The other passenger, presumably the child's father, is a very dead man.

With the film's tone already set in salt — and magnified by Alexandre Desplat's soaring yet ominous score — there's very little pleasure to be had in watching the couple bask in the warmth of parenthood. As surely as that lighthouse beam will swing round again, the baby's mother is certain to come looking for her — and in the fiercely distraught person of Rachel Weisz, no less.

Ah, but I have ventured further into the plot than the trailer reveals. Let's just say the layers of tragedy that are heaped upon these characters create a Dagwood sandwich of misfortune. The only way to relieve their wretchedness is to cut away from the action and return 25 years later, at which point one or two final indignities are tossed in for good measure.

In 2004, I interviewed James Elkins, an academic who wrote Pictures & Tears, a history of art that exists primarily to make people cry. Yes, Elkins explained, before modern movies came along to lead the charge, entire schools of painting and sculpture had been created for precisely this reason.

"Crying at a movie puts you in touch with emotions you would ordinarily suppress," Elkins said. "It's good to lose control sometimes. Otherwise you're setting yourself up as someone who knows more about the world than Leonardo or Hitchcock."

The Light Between Oceans is no Hitchcock, nor is it about to be screened beside the Mona Lisa at the Louvre. But like the works of those ingenious craftsmen, the film accomplishes its primary objective with consummate efficiency and skill.

Yes, it's crying time again. But for more than enough moviegoers, that's no crying shame.