(Video) Snowden Movie Trailer: The NSA's illegal surveillance techniques are leaked to the public by one of the agency's employees, Edward Snowden, in the form of thousands of classified documents distributed to the press.

In his gushing cinematic tribute to National Security Agency dissident Edward Snowden, Oliver Stone crouches belligerently in his hero's corner, cheering him on as Snowden lands one righteous sucker punch after another on a lumbering and unscrupulous nemesis: the U.S. military-intelligence complex.

Many of Stone's most memorable films have been about real people — including Nixon, W., JFK and The People vs. Larry Flynt. Most of them succeeded because, no matter how Stone felt personally about the main subjects, he still painted intricately rounded portraits of them. Layer by layer, he deconstructed their personalities to help us understand how they ended up the way they did.

Here, oddly, Stone has produced a blandly one-dimensional protagonist. From Frame 1, as we witness him training for Special Forces duty despite two broken legs, Snowden is the very picture of an all-American hero. He is played by Joseph Gordon-Levitt, an excellent actor (breathtaking in Don Jon) who here is asked to do little more than posture bravely in the face of adversity, like Superman with a pocket protector.

Transferring from Special Forces to military intelligence, Snowden quickly discovers that the U.S. government, public assurances to the contrary, is collecting phone and computer data on virtually all its citizens — a violation of the NSA charter, which allows only foreign intelligence-gathering. More unnerving still, he learns, the military has developed software so advanced that just a few well-chosen search terms can tweeze out the most intimate details of anyone's life.

Snowden, a brilliant programmer, engages in this sifting as long as his conscience will allow. But when he realizes that one of his own programs is being used for the monitoring, he decides enough is enough: He downloads incriminating documents onto a tiny memory stick, hides it inside his ever-present Rubik's Cube and — in the film's tensest sequence — smuggles it out of the high-security facility where he works, never to be seen again. Snowden then releases the documents to the press, and the rest is (still-unfolding) history.

Stone, to his credit, does not demonize those behind the information-collection programs. He sees a USA so traumatized by the attacks of 9/11, and a military so blindly driven to prevent their recurrence, that ordinary people consent to relinquish their freedoms for security. Characters willing to make that trade-off get ample screen time to state their case — most eloquently, Rhys Ifans as Snowden's CIA boss. These folks even get to reveal their sometimes mixed feelings, which makes them more intriguing than Snowden, who seems not to have a doubting cell in his cerebellum. 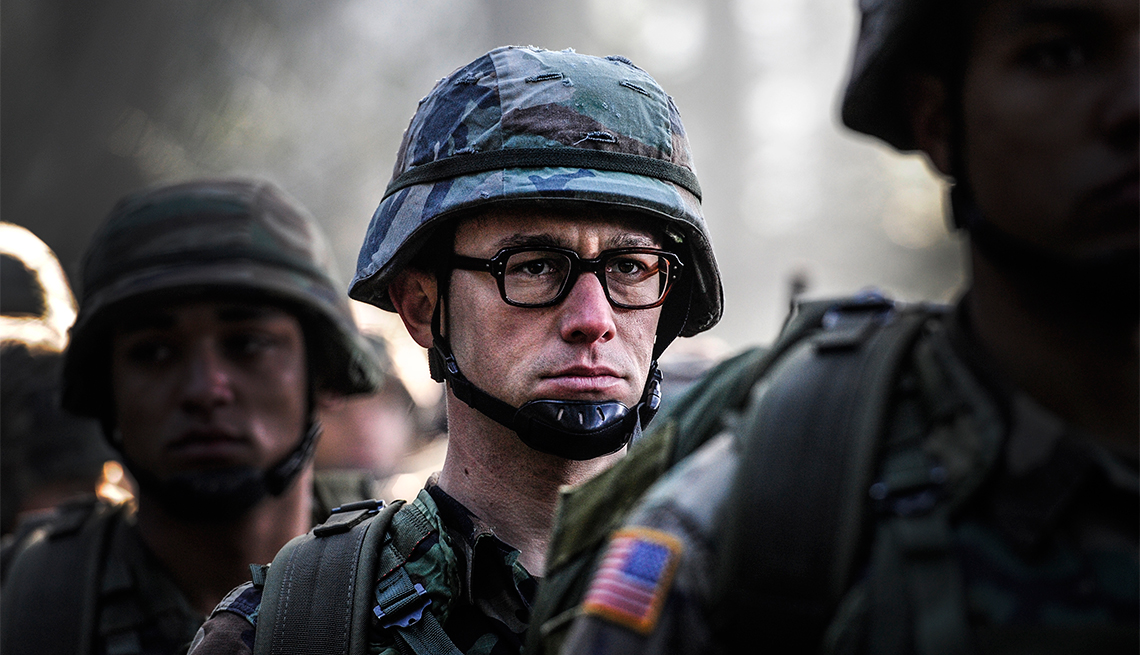 Joseph Gordon-Levitt as Edward Snowden, posturing bravely in the face of adversity

With Snowden as his lodestar, Stone clearly wants us to question that thirst for security over freedom. He pillories both Presidents George W. Bush and Barack Obama for continuing to feed the government information-gathering apparatus and frets — through the words of Snowden and his coconspirators — that people will remember the whistle-blower's actions while forgetting his message. Snowden, it appears, is Stone's attempt to keep that from happening.

Stone remains an excellent storyteller. Snowden moves along briskly, and when the director feels compelled to explain the technology involved, he lays out the details in appealingly streamlined animation. Stone has also assembled, as usual, a stellar supporting cast, including Nicolas Cage as a wise old CIA instructor, Tom Wilkinson as a wily newspaperman and Joely Richardson as an exasperated editor.

Through an ingeniously simple cinematic transition, Gordon-Levitt disappears in the final minutes and Edward Snowden appears in his place. Almost immediately, the film comes to life with an urgent authenticity that has been missing for the first two hours.

At that moment it becomes clear that Stone should have skipped the narrative form and opted for the approach he took in his earlier documentary films about Venezuela's Hugo Chavez and Cuba's Fidel Castro: Just let the guy speak for himself.