(Video) Nocturnal Animals Movie Trailer: An art gallery owner is haunted by her ex-husband's novel, a violent thriller she interprets as a veiled threat and a symbolic revenge tale.

Like a hollow-eyed fashion model, Nocturnal Animals struts down the runway in edgy, eye-catching threads. But draped over that skin-and-bones frame is an improbable getup that, like most haute couture, no one will ever buy.

This marks the second time that Tom Ford — who made a fortune designing Gucci purses, evening gowns and makeup brushes — has perched in the director's chair. His Oscar-nominated first film, A Single Man, benefited from a heartfelt narrative about a gay college professor, delivered via a breathtaking performance by Colin Firth. This time around, Ford gives us two stories for the price of one. Neither merits the price of admission.

Framing the film is the tale of Susan (Amy Adams), an art-gallery owner whose frosty second marriage to a trim-suited businessman (Armie Hammer) is swirling down the drain. Her stern-faced character stalks about the gallery, high heels clicking, steely eyes presciently spying trends just as they emerge. (But try, if you can, to ignore her taste: Much of the art she favors resembles the fixtures from that milk bar in A Clockwork Orange.)

One day Susan receives an ominous package in the mail: It's the manuscript of a novel written by her long-discarded first husband, Edward (Jake Gyllenhaal). Titled Nocturnal Animals (a nod to Susan's claim that "You know me; I never sleep"), the book is dedicated to Susan, so she expectantly curls up to read it — on a designer couch, of course, and perfectly spotlit in her house of glass and gray slate. 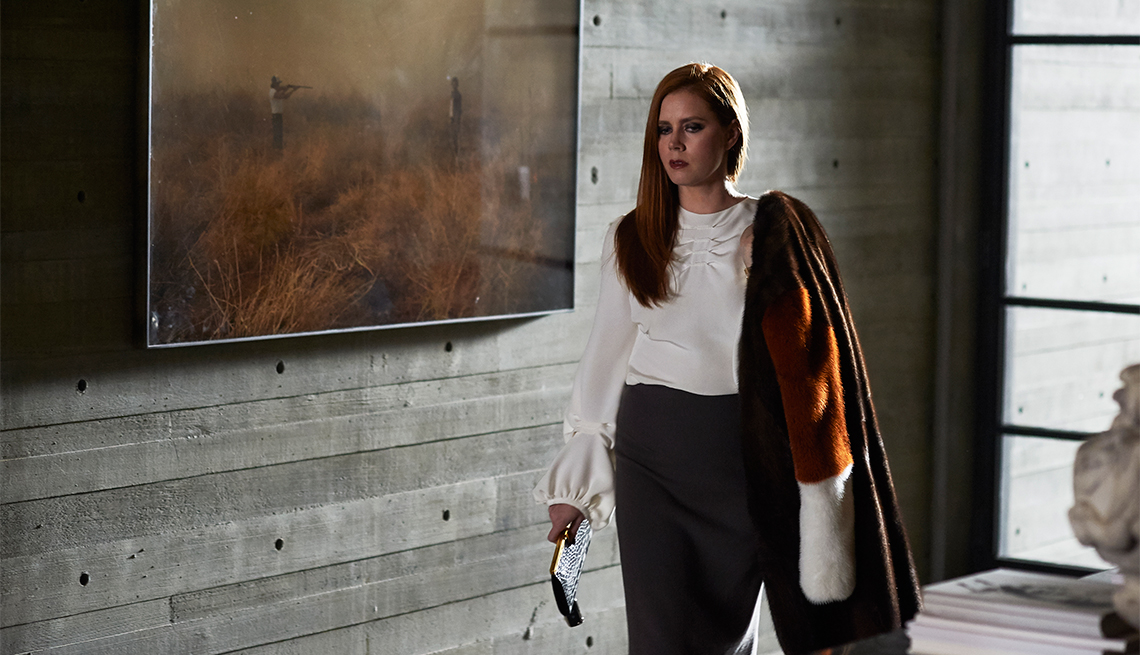 Shortly the book's narrative comes alive on the screen. The novel tells the story of a husband and father named Tony (Gyllenhaal, in a dual role), traveling with his family through a dark west Texas night when their car gets run off the road by a band of blood-lusting desert drifters. Tony watches helplessly as his wife and daughter are abducted into the night. Abandoned in the wilderness, he stumbles to the nearest small town, where a grizzled detective (Michael Shannon) helps him find his family, then exact revenge on the monsters who attacked them.

As Susan informs a gallery colleague, the lurid tale that unspools in the novel is "violent and sad." Ford drives home this point by quick-cutting to Susan dropping the book like a scalding-hot hors d'oeuvre at a Westwood gallery opening every time something startling occurs in its pages. Periodically, Susan stops reading long enough to drift into reveries of her brief marriage to Edward, which requires frequent switches back and forth between Gyllenhaal's two characters. This would be confusing were it not for Gyllenhaal's instructive deployment of his two primary facial expressions: wide-eyed madness (Tony) and stone-faced nerdiness (Edward).

The plot of the novel plays itself out, but as an audience, we have very little invested in it. Embedding a novel within another narrative worked well in The Princess Bride, but Nocturnal Animals doesn't have Andre the Giant and Mandy Patinkin going for it. As for Susan's misgivings about the failure of a marriage that ended 20 years ago, we don't like her enough to share her moony funk.

Ford certainly has an accomplished eye: His desert scenes sweat right off the screen, while his vision of the antiseptic art circles of L.A. resembles outré ads from Vanity Fair brought to life.

Two outstanding supporting performances nearly salvage the proceedings. Michael Shannon's crusty, grumbling, back-of-beyond detective may be a stock character, but the actor has so much fun with it that we happily go along with the gag. And in a single scene, the ever-reliable Laura Linney is galvanizing as Susan's estranged mother, offering the less-than-reassuring news that Susan will look into the mirror one day and find Mom looking back.

If you insist on indulging your curiosity about Nocturnal Animals, consider lingering at the concession stand while the opening credits play — unless, of course, you're a connoisseur of slow-motion shots of enormous naked women, dancing enthusiastically while waving pom-poms and blazing sparklers. That's no body shaming by a clueless critic. It's simply that for a director this clearly besotted by sharp-featured beautiful people, the gimmick has the whiff of a cruel joke.