You wouldn’t think the guy who produced the Oscar-winning music drama Whiplash could also be the brains behind the Purge horror movies — the third of which has just arrived in theaters. Yet producer Jason Blum is responsible for both. In this 60-second clip he cheerfully explains why blood and guts is his bread and butter. 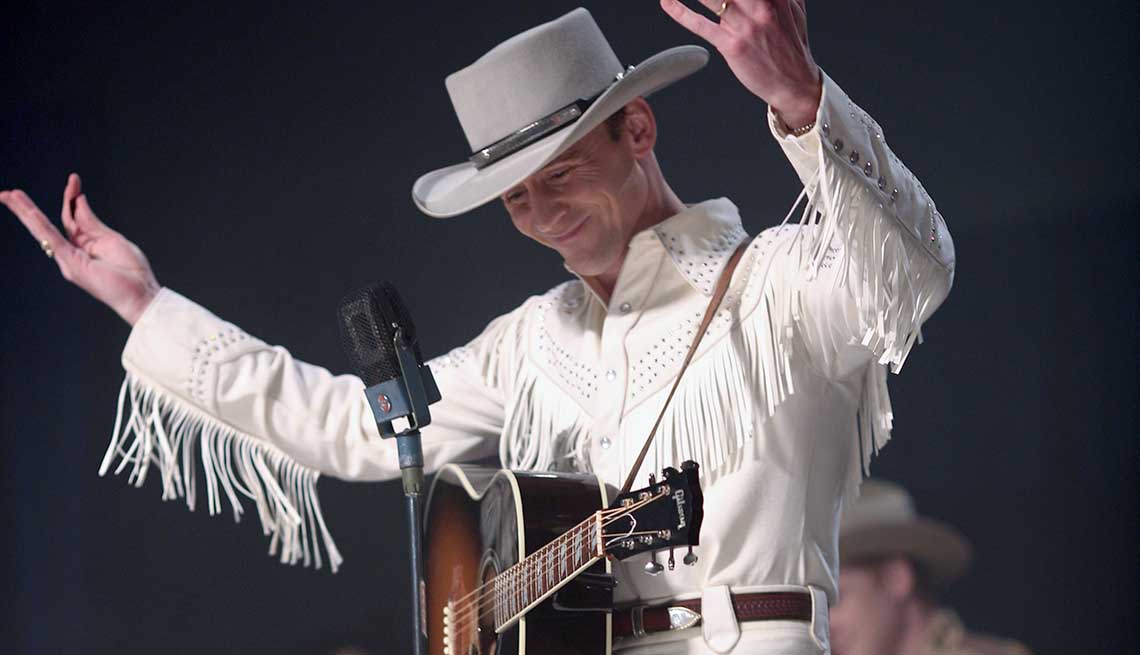 British star Tom Hiddleston sees nothing odd about playing country legend Hank Williams in the biopic I Saw the Light, coming to DVD and Blu-ray this week. The long, lanky London-born owner of a fine singing voice also pulls off a convincing Southern accent.

The fact is, Hiddleston tells Movies for Grownups, the British dote on Dixie.

Viggo Mortensen is splendid as a latter-day Thoreau who raises six children in a Pacific Northwest forest, hectoring them about the superiority of their lifestyle compared with us space-age softies. After a while, though, the backwoods boasting starts to chafe like wood chips in your hiking boots. Think of it as Into the Wild meets Little Miss Sunshine, with handfuls of The Great Santini thrown in for good measure.

Albert Brooks, Laraine Newman, Louis C.K. and Dana Carvey are among the familiar voices in this animated tale of what goes on when dog and cat owners make the naïve mistake of leaving them home alone.

Angelina Jolie-Pitt, a masterly technician as a director, delivers this somber study of a troubled couple (herself and real-life husband Brad Pitt) trying to unkink their problems in a hotel on the coast of “France” (Malta, if you must know). There are solitary strolls against stunning backdrops and abundant contemplation of the horizon, but the truth about what’s eating these gorgeous people proves anticlimactic.

Director-star Jason Bateman probes the darker corners of family relationships in the story of a brother and sister (Bateman and Nicole Kidman) enduring an uneasy homecoming with their world-famous performance-artist parents (Christopher Walken and Maryann Plunkett). Bateman skillfully steers the proceedings from unsettling comedy to intriguing mystery.

In this action buddy comedy, Kevin Hart stars as a meek accountant who reconnects with an old high school classmate (Dwayne “The Rock” Johnson) and gets swept into a dangerous case of international espionage.

Ellen DeGeneres leads an A-list of veteran stars — including Albert Brooks, Ed O’Neill, Diane Keaton and Eugene Levy — giving voice to the endearing aquatic characters in Pixar’s latest animated masterpiece. There are laughs aplenty, but also — as in every Pixar epic — moments of genuine sentiment and transcendent beauty.

Matthew McConaughey stars as a Mississippi farmer who leads a rebellion of whites and escaped slaves against the Confederacy during the Civil War. He gives a powerful performance, and the movie oozes earnestness. By including too many storylines, though, writer-director Gary Ross has created an overstuffed cotton bale of a movie. FULL REVIEW

Colin Firth and Jude Law star in this uncommonly literate and unexpectedly moving account of legendary book editor Max Perkins (Firth) and his stormy mentorship of author Thomas Wolfe (Law). The story portrays art being forged in the crucible of clashing personalities; the film is about the inscrutable mysteries of creativity. FULL REVIEW

It’s been 20 years since aliens tried to destroy our planet in the 1996 original — and now, wouldn’t you know it, they’re ba-a-a-ack. Veterans of that first battle, including Jeff Goldblum, Vivica A. Fox and Brent Spiner, return to save us again.

Pack your pockets with tissues before settling in for this unapologetic weepie, the story of a young woman (Game of Thrones’ Emilia Clarke) determined to make life worth living for a handsome quadriplegic (The Hunger Games’ Sam Claflin). Charles Dance and Janet McTeer are touching as the hero’s furrowed-browed parents. FULL REVIEW

Susan Sarandon shines as the overinvolved mother of a TV writer (Rose Byrne). She smothers the poor girl with attention — until Mama catches the eye of a charming ex-cop (J.K. Simmons) who rides a Harley and raises chickens. FULL REVIEW

George Clooney is the host of personal-finance TV show. Julia Roberts is his producer. Jack O’Connell is the desperate viewer who takes them hostage after losing everything by following their advice. Jodie Foster is the director. FULL REVIEW

The prodigious prestidigitators who participated in the primary part of this pair of pictures proffer a perfectly presentable postscript. Jesse Eisenberg, Woody Harrelson, Dave Franco and Lizzy Caplan are back as the Four Horsemen, a renegade stage magic team.

* The Phenom
If we ever need to see a shrink, please let it be Paul Giamatti. Here the masterly actor plays a sports psychologist trying to help an insecure young pitcher (Johnny Simmons) overcome anxieties rooted in his relationship with an abusive dad (Ethan Hawke).

Luis Guzmán and Edgar Garcia are fun as a pair of NYPD cops dispatched to the City of Light to nab some fashion pirates. It would have been more fun if the guys had brought along their costars, Rosie Perez and Rosario Dawson, utterly squandered as their better halves back home in Noo Yawk. FULL REVIEW