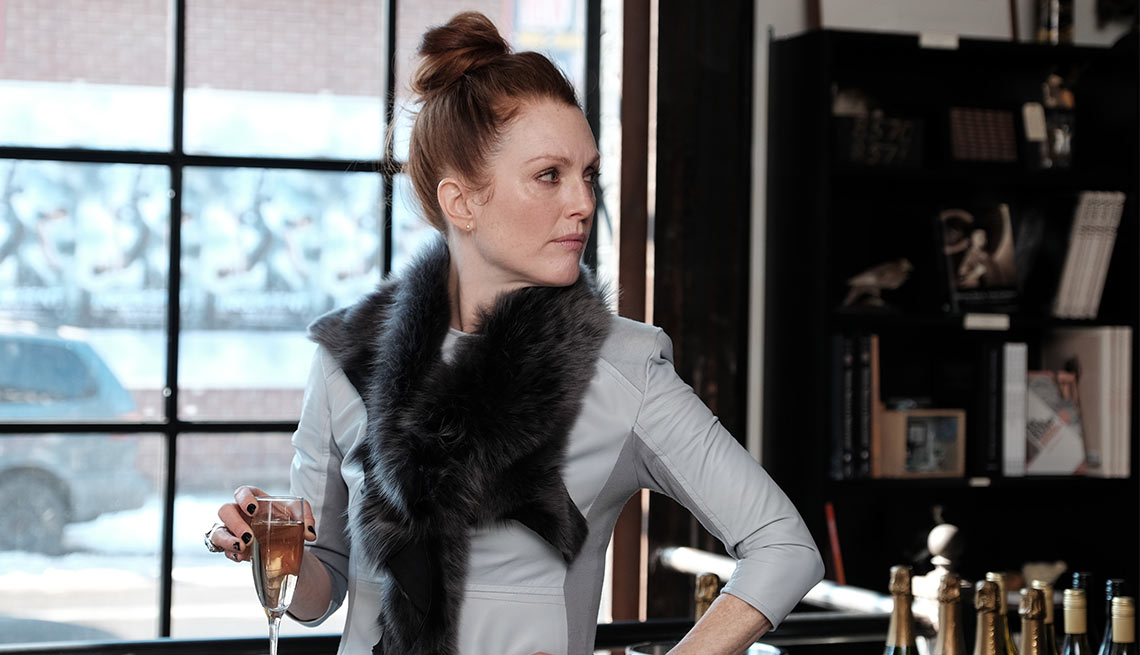 We’re used to seeing Julianne Moore play sad or serious roles: Still Alice, Children of Men, Freeheld. But in Maggie’s Plan (May 20), the Oscar-winning actress gets her funny on. Moore plays a college professor named Georgette whose husband, John (Ethan Hawke), leaves her for clueless homewrecker Maggie (Greta Gerwig). When the new romance goes sour, Maggie and Georgette conspire to return John to the nest. “Julianne approaches everything with an absolutely fearless attitude,” writer-director Rebecca Miller (playwright Arthur Miller’s daughter) tells Movies for Grownups. “She’s like somebody going into battle.” At 53, Miller reflects, “I feel like I’m entering my prime as a filmmaker. Age and experience have been great for me.”

* Money Monster
George Clooney is host of a TV financial show, Julia Roberts is his producer — and Jack O’Connell is the desperate viewer who lost everything by taking their on-air advice. When he hijacks the show and demands answers, he puts them all in peril. Directed by Jodie Foster.

* A Bigger Splash
Against the lavish backdrop of an Italian seaside villa, beautiful peeps Tilda Swinton, Ralph Fiennes and Dakota Johnson encounter passion, jealousy and insecurity — but mostly passion — in this sensuous mystery. Swinton plays a rock singer coping with the ripples of certain life decisions.

The Lobster
Think it’s tough being single these days? Consider the future envisioned here: Single folks must check into a hotel where, if they don’t find a mate in 45 days, they’ll be turned into animals. Colin Farrell, Rachel Weisz and John C. Reilly are among those racing the clock.

Love & Friendship
The closest thing you’ll find to a laff riot from Jane Austen: Kate Beckinsale stars as a scandalous 1790s British noblewoman who, while visiting her in-laws, sets out to score a husband for herself — and a rich aristocrat for her simpleminded daughter (Morfydd Clark).

Last Days in the Desert
Ewan McGregor plays both Jesus and Satan in writer-director Rodrigo Garcia’s speculative account of what happened during The Man from Galilee’s 40-day desert ordeal.

Deadpool
The first R-rated mainstream superhero movie stars Ryan Reynolds as a kill-happy, potty-mouthed ex-Special Forces guy with the power to bounce back from any injury.

Where to Invade Next
Michael Moore (Roger & Me) travels the world, “invading” other countries to steal their best ideas. It’s all whimsical, refreshing and unscripted.

The filmmakers spend two hours setting up the conditions under which Superman and Batman can fight on equal terms. By then, who can remember what they’re so mad about?
FULL REVIEW

In a biopic that skips freely from fact to fiction and back, Ethan Hawke is tragically endearing as 1950s jazz legend Chet Baker. FULL REVIEW

Melissa McCarthy is as defiantly funny as ever, playing a fallen corporate mogul making her comeback in a brownie-peddling business. But Mel, your perennial blowhard-with-a-heart-of-gold shtick is wearing thin. FULL REVIEW

This duckbilled platypus of a movie is ungainly and slapped together, but giddy good fun to behold. The grownup stars include Robert Downey Jr., Don Cheadle, William Hurt, Hope Davis, Marisa Tomei and Alfre Woodard.

Returning to his district on the picturesque Maine coast, a U.S. congressman (Treat Williams) gets a rocky reception from his constituents. George Hamilton pops up in a fun supporting role, and Elizabeth Marvel (House of Cards) is a delight as the politico’s refreshingly grownup love interest. Co-directed and written by Robert Mrazek — himself a survivor of Congress.

Michael Shannon is the King; Kevin Spacey is the Prez. Both are pitch perfect in this delightful fly-on-the-wall look at Elvis’ impromptu 1970 Oval Office visit.

Helen Mirren stars as a British commander who must decide whether to take an innocent life in a drone strike on a terrorist meeting site. The superb players include the late Alan Rickman in his final film role. FULL REVIEW

Director-star Jason Bateman probes the dark corners of family bonds in this story of siblings (Bateman and Nicole Kidman) enduring an uneasy homecoming with their performance-artist parents (Christopher Walken and Maryann Plunkett). Bateman skillfully steers the proceedings from unsettling comedy to intriguing mystery.

Tom Hanks provides all the fun as a struggling U.S. businessman who travels to Saudi Arabia in a last-ditch bid to sell new technology to an Arab monarch.

Gabriel Byrne is a father coping with the loss of his wife, a famed photographer played by Isabelle Huppert. The ever-versatile Jesse Eisenberg costars as their son.

Nanni Moretti’s extraordinary study of a film director trying to balance work and caregiving strikes one visceral chord after another.

Susan Sarandon shines as the overinvolved mother of a TV writer (Rose Byrne). She smothers the poor girl with attention — until, that is, she catches the eye of a charming ex-cop (J.K. Simmons) who rides a Harley and raises chickens.

Producer-director-writer-star Don Cheadle’s heartfelt bio of Miles Davis follows the drug-addled trumpeter through a nightlong quest to recover a stolen session tape. It’s a jumble out there, but Cheadle is brilliant.

Resist the pull of Julia Roberts, Jennifer Aniston and Kate Hudson by staying away from this undisciplined (code word for “bad”) comedy.