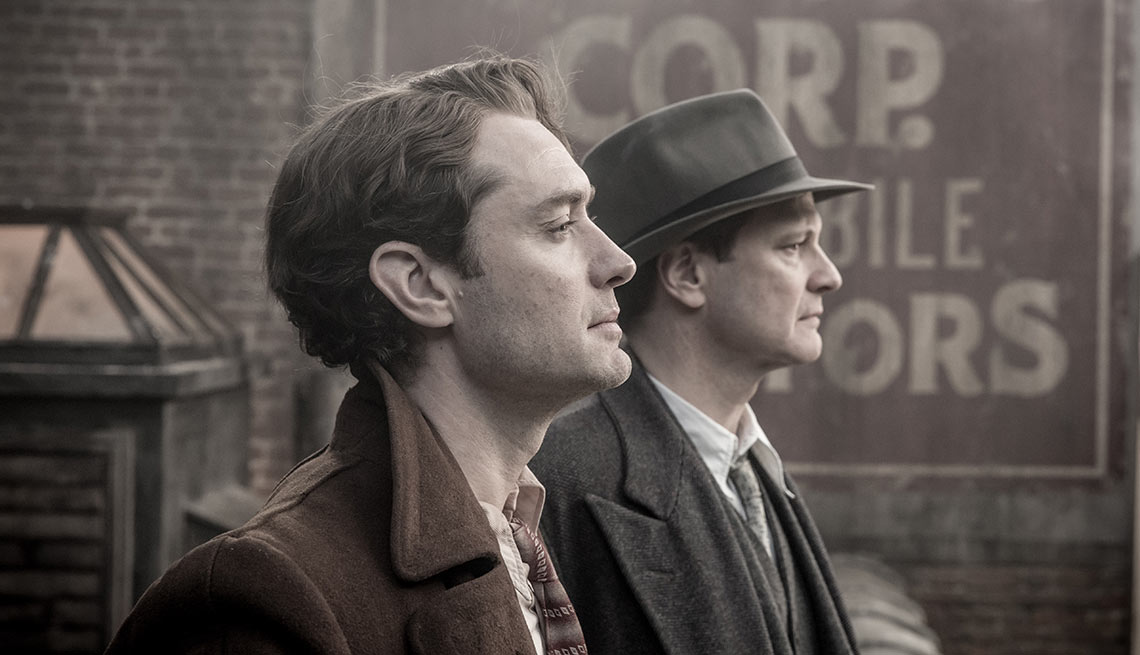 Author A. Scott Berg has waited 37 years for his 1979 National Book Award-winning biography of legendary book editor Max Perkins to become a movie. And although he’s thrilled with Colin Firth starring as Perkins in Genius, back in ’79 the role was coveted by a bonafide Hollywood legend. “Paul Newman wanted to play him,” Berg tells Movies for Grownups. “With those blue eyes and that temperament, he would have been perfect as Max.” What’s more, the pivotal role of writer Thomas Wolfe would have been played by a young actor named Tommy Lee Jones. “He had the look,” says Berg, “and like Wolfe he was from the South.” That version of the film fell through, but one element remained intact: Perkins’ trademark fedora stays pulled tightly on his head, even during meals with his family. “Some people thought he slept in that hat,” says Berg. “Perkins was hard of hearing, and he may have worn the hat to channel sound into his ears. Others suggested it was so people would think he was in a rush to get somewhere else, and they wouldn’t waste his time.” Now that’s genius.

EXCLUSIVE VIDEO: Jesse Eisenberg has nothing up his sleeve

He has played a top-flight magician in two installments of the hit Now You See Me, but in this clip Jesse Eisenberg confesses that sleight of hand is not his thing. Costar Woody Harrelson, by contrast, is a natural at it.

Colin Firth and Jude Law star in this uncommonly literate and unexpectedly moving account of legendary book editor Max Perkins (Firth) and his stormy mentorship of author Thomas Wolfe (Law). The story portrays art being forged in the furnace of conflicting personalities; the film is about the inscrutable mysteries of creativity.

The prodigious prestidigitators who participated in the primary part of this pair of pictures present a perfectly presentable postscript. Jesse Eisenberg, Woody Harrelson, Dave Franco and Lizzy Caplan are back as the Four Horsemen, a renegade stage magic team coerced into doing some backstage moonlighting for a goofy tech mogul (Harry Potter’s Daniel Radcliffe).

Luis Guzmán and Edgar Garcia are fun as a pair of NYPD cops dispatched to the City of Light to nab some fashion pirates. It would have been more fun if the guys had brought along their costars, Rosie Perez and Rosario Dawson, who are wasted as their better halves back home in Noo Yawk.

More than 20 years after the release of the classic video game, the movie version of the Orcs vs. humans epic slashes its way onto the screen. If you love the game, you’ll probably spend an agreeable two hours. If you don’t know your Orcs from your Morks, stay far, far away.

Joel and Ethan Coen (Fargo) plunge us into a fantasized version of 1950s Hollywood with this delightful ensemble piece about a studio head (Josh Brolin) whose biggest star (George Clooney) gets kidnapped. There are high-wattage cameos from every corner of the film empire — Ralph Fiennes, Scarlett Johansson, Tilda Swinton, Frances McDormand, Channing Tatum, Jonah Hill and Wayne Knight among them.

Journey to Space
Who better to narrate this spectacular documentary about the future of deep-space exploration than Star Trek’s Captain Picard himself, Patrick Stewart?

13 Hours: The Secret Soldiers of Benghazi

Action master Michael Bay (Armageddon, Transformers) directs this war drama about how security broke down during an attack on a U.S. diplomatic compound in Libya. John Krasinski (The Office) stars. Will you sit on the left or right side of the aisle?

From writer-director Charlie Kaufman (Being John Malkovich) comes this ingeniously clever and, at times, heart-stoppingly human stop-motion animated story of a businessman facing a midlife crisis.

Pack your pockets with tissues before settling in for this unapologetic weepie, the story of a young woman (Game of Thrones’ Emilia Clarke) determined to make life worth living for a handsome quadriplegic (The Hunger Games’ Sam Claflin). Charles Dance and Janet McTeer are touching as the hero’s furrowed-browed parents.