One of TV’s busiest actors, Rene Auberjonois, has a new boss: his 42-year-old son, Remy, who directed his father in Blood Stripe, opening this week at the Los Angeles Film Festival. “It was odd telling my father what to do,” says Remy of his first directing gig, “but he was game.”

Remy — an in-demand actor in his own right — cowrote this story of a female Marine (Kate Nowlin, Remy’s wife) struggling to adapt to civilian life after three tours of duty in Afghanistan. With the subject matter verging on dark, the senior Auberjonois suggested a humor injection: “My dad read the script and said, ‘You need to lighten this up,’ ” Remy recalls. “He learned that working with Robert Altman, who directed him as Father Mulcahy in M*A*S*H.”

In this clip from the film, exclusive to Movies for Grownups, Rene’s character — a minister who runs a summer camp — reminds the traumatized Marine of a triumph she once experienced there as a young girl. 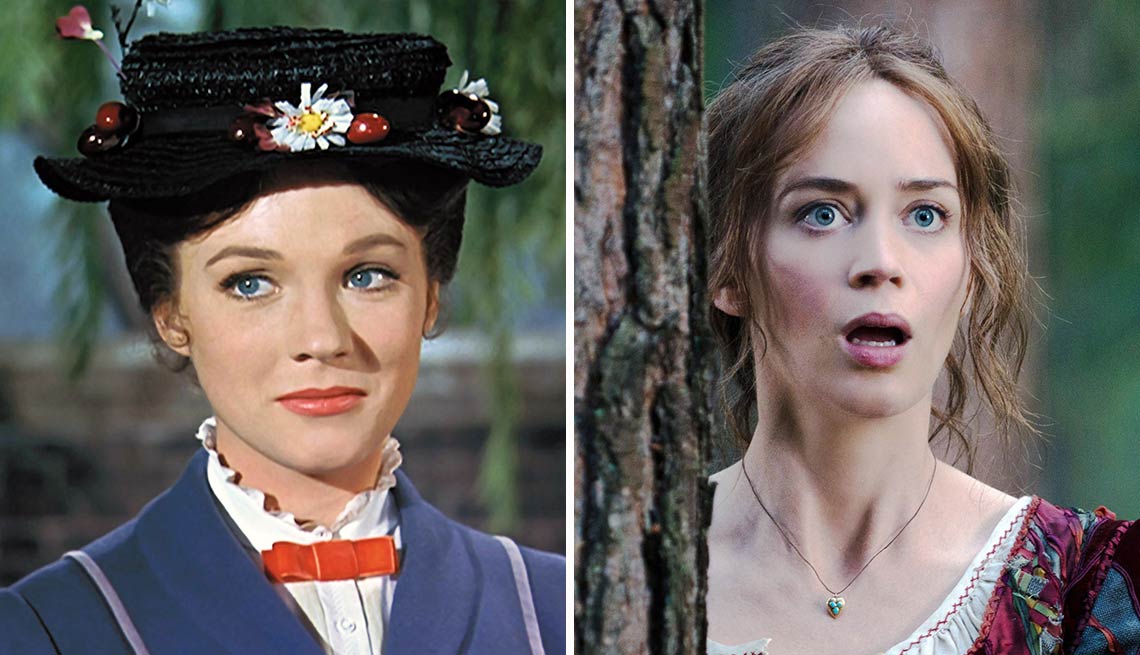 “Goodbye, Mary Poppins,” said Bert the chimney sweep (Dick Van Dyke) at the end of Walt Disney’s classic 1964 film. “Don’t stay away too long!” Just as you’d expect of the strong-willed nanny (Julie Andrews), she utterly ignored him. Fifty-four years after the original, on Christmas of 2018, Disney will release the lo-o-o-ng-awaited sequel, Mary Poppins Returns. The internet is abuzz with pros and cons about the new Mary, Emily Blunt, but we’re “spit-spot” about it: Blunt sang up a storm in Disney’s Into the Woods. (Let’s just hope Mary/Emily doesn’t get steamrollered by Disney’s nakedly mercantile sequel machine.)

Pack your pockets with tissues before settling in for this unapologetic weepie, the story of a young woman (Game of Thrones’ Emilia Clarke) determined to make life worth living for a handsome quadriplegic (The Hunger Games’ Sam Claflin). Charles Dance and Janet McTeer are touching as the hero’s furrow-browed parents, and it’s fun to see Downton Abbey’s faithful man servant, Brendan Coyle, as Clarke’s working class dad.

Andy Samberg expands on his old SNL Digital Shorts music formats with a feature-length mockumentary about a clueless rock star. With a galaxy of his old TV buddies including Bill Hader, Maya Rudolph, Will Forte, Tim Meadows and Jimmy Fallon.

Officer Casey Affleck has been shot by a group of crooked Atlanta cops trying to create a distraction so they can pull off a heist across town. The bad news — for them — is that the targeted cop doesn’t die.*

This new film version of Ronald Harwood’s play features two of our greatest actors—Anthony Hopkins and Ian McKellan—in two of their finest performances. Literate, uncompromising and challenging, the story of a fading Shakespearean actor (Hopkins) and his faithful dressing room assistant (McKellan) grabs the viewer with visceral immediacy and never lets go.

Nicolas Cage stars as Charles B. McVay, captain of the torpedoed ship that sank in the closing days of World War II, leaving nearly 1,000 men floating in the ocean at the mercy of the sea, sun and sharks.

OK, now we’re confused. Are these the ones who hang out at Iron Man’s house? They all wear tights, right?